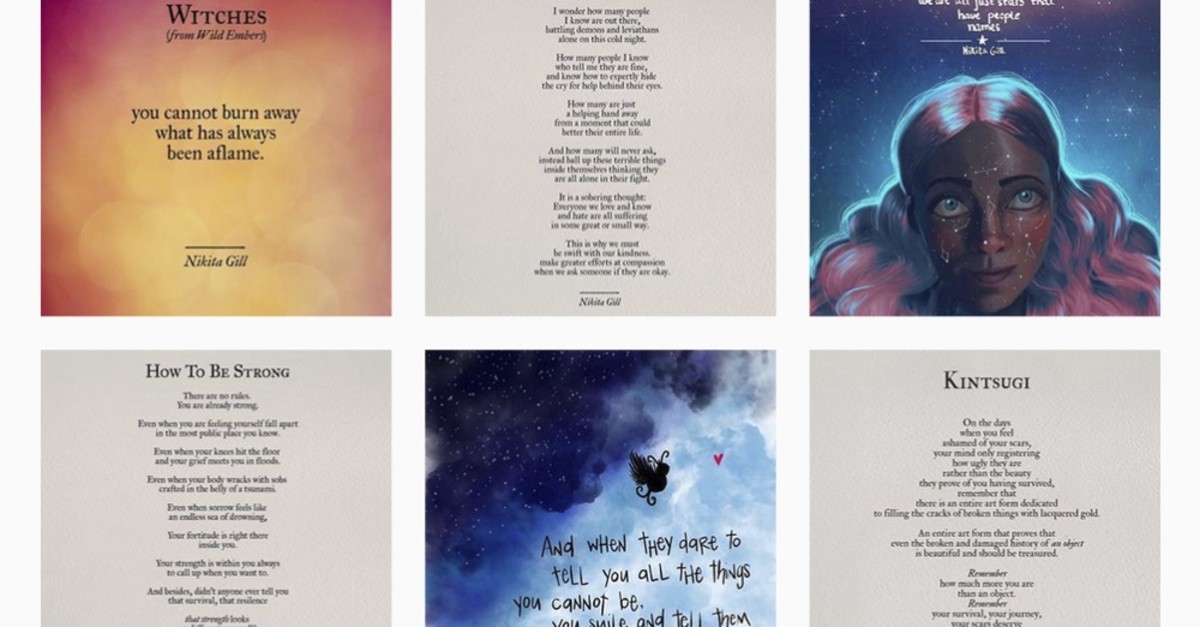 A screenshot taken from the Instagram page of Nikita Gill shows examples of her poetry.
by Sep 24, 2019 12:11 am

Eighteen-year-old Londoner Danique Bailey is one of a new generation of poets using social media to revive the art. The teenager was among the 100 winners of last year's Foyle Young Poets of the Year Award, an international competition of 6,000 11- to 17-year-olds from 83 countries. She was rewarded for a mischievous ode to the plantain fruit.

"Social media made a lot more people interested in poetry, including myself," she told Agence France-Presse (AFP), calling it a "really fun and satisfying way to express yourself in a short amount of space." She is not the only millennial getting into the art - sales of poetry books jumped 66 percent between 2012 and 2017, according to Nielsen BookScan, which gathers data for the book publishing sector. Around 1.3 million poetry books were sold last year, a 12% increase over the previous year, its figures show.

Two thirds of the buyers were aged under 34.

Judith Palmer, director of the Poetry Society, suggested that people were turning to poetry because it grapples "with existential questions that people are trying to come to terms with... about our lives in uncertain times.

"Of course there are long poems, but mainly, poems are short and it works really, really well to read on a phone, to swap around, to read, to find on social media," she added.

Her group's research found that Instagram was often the place that people were first introduced to poetry.

Indian-born Canadian Rupi Kaur, 26, is one of the stars of this platform, boasting 3.7 million subscribers. Her collection, "Milk and Honey," which combines poetry, prose and illustrations, has grown in popularity in Britain, driving overall poetry sales. The youth and diversity of the "Instapoets" has made teenagers aware that not all poems are written "by dead white men from 200 years ago," said Palmer.

Young fans often set up poem playlists that they listen to on their phones and tablets which they also use to search for and share new material, she said.

The National Poetry Library in London has already attempted to ride the wave, last year holding the first-ever exhibition devoted to poetry on Instagram.

"There's a big audience in Instagram poetry but we were overwhelmed with the submissions" from budding poets, National Poetry Librarian Chris McCabe told AFP.

He was surprised by the ingenuity and creativity, he said, with poems inspired by subjects ranging from politics to nature, written with fridge magnets or on a typewriter, accompanied by photos, videos and even illustrations.

"The language is often much simpler than you would get in a traditional poem. And it's much more visual as well," he said.

It is a "totally new way of how an audience and the poet engage with each other," he added.

Instagram sensation Nikita Gill, 32, explained how she used the medium, telling AFP that she normally posts "very few lines of poetry... and it immediately makes an impact."

The British-Indian author of "Great Goddesses," a collection of poetry and prose exploring myths and legends, said this new way of communicating "dispels that notion about poetry that you can only read poetry if you've got a literature degree." Whether exploring the traditional Japanese form of haiku or expressing their deepest emotions, the one thing that the "Instapoets" have in common is "that we all add our own personal touch to what we share," said Gill, who also makes the illustrations for her work.

She puts the success down to the idea that "it's really moving when someone shares something really personal with you."

And she encouraged aspiring poets to "not be afraid" and get writing.