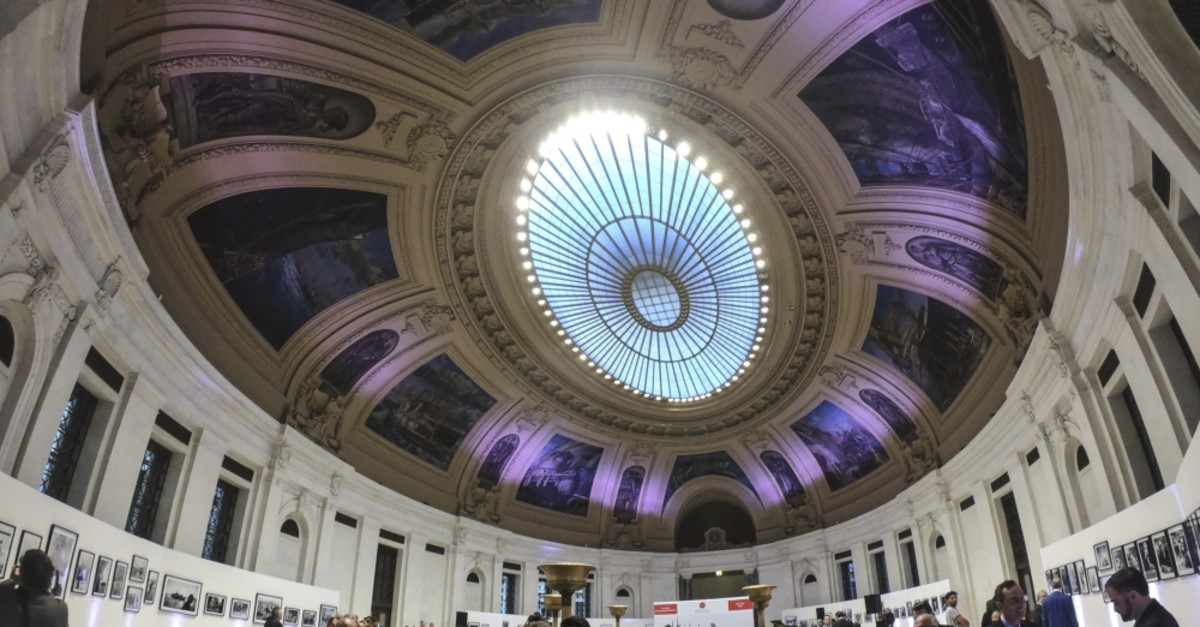 The Ara Güler Photography Exhibition held by the Turkish Presidency around the world was opened by President Recep Tayyip Erdoğan in New York, coinciding with the U.N. General Assembly.

The opening ceremony, organized with the participation of President Erdoğan and first lady Emine Erdoğan at Alexander Hamilton U.S. Custom House, which is located at the Smithsonian Museum and one of the most significant places in New York, was held on Sept. 23.

Speaking at the opening ceremony, John Baily, who is a big fan of Ara Güler, said: "Ara Güler defined photojournalists as the ones who run toward an explosion while photographers as the ones who run away from it. Ara Güler runs toward his story. While doing it, he actually runs in history. He was such an artist. I am proud of honoring him this night."

President Erdoğan said at the ceremony: "I am very pleased to be in New York, which is a cultural city, for the opening of the Ara Güler exhibition. It was previously opened in Kyoto, London and Paris. We are presenting it to precious art lovers in New York and our American friends this time. Ara Güler was a person who believed in peace and brotherhood. It is also important that this exhibition, which is held to cherish his memory, is organized in the same period as the U.N. General Assembly. Culture and arts act as a universal bridge in the development of relationship between societies. With this understanding, I hope that the works by Ara Güler, a meaningful, world brand in his profession, will reach the people of different cultures and nations from all over the world. Photographer and photojournalist Ara Güler, who is known as 'Master of Leica' and passed away last year, is one of the greatest values that rose in Turkey in the area of photography. Ara Güler describes himself as

a photojournalist who writes himself with his historical machine. Until his last breath, he kept pressing the camera shutter button for us, for all of humanity. When he came to my house and took my pictures, he left a very different moment. I can't forget a memory when I'm adjusting the positions of the pictures he took with my grandchildren. Surely, this memory lives with us in those frames. Great artists continue to live with the works they left behind after their death. The great master Ara Güler made history with his lens. His works have been placed in the important museums and collections around the world, and he has reached millions with his photographs, which reveal life. Considered one of the best photographers in the world, our artist is also known as 'the Eye of Istanbul' and 'the Last Poet of Istanbul' - but not only by this. Ara Güler was also a witty man remembered for his teasing. Besides being witty, he really made people laugh. Our master photographer has left behind a visual memory of the 20th century. It will be a great pleasure for us to contribute to the information repertoire of visitors about Istanbul and Turkey with the exhibition."

Famous pianist and composer Fahir Atakoğlu, whose "Istanbul in Blue" album cover is an Istanbul photo by Ara Güler, gave a recital at the opening ceremony of the exhibition and presented chapters from the same album. Erdoğan and the first lady then visited the exhibition together with the official delegation. President Erdoğan signed the official book of the exhibition, the preface of which was written by him, and presented it to the presidents that will attend the U.N. General Assembly.

The Ara Güler Photography Exhibition was welcomed with interest at London's Saatchi Gallery in April, at the Paris Polka Gallery in May, in the Tofuku-ji temple in Kyoto during the G20 Summit and will now host art lovers at the Alexander Hamilton U.S. Custom House in New York until Oct. 4. The exhibition, whose main sponsors are Halkbank, Ziraat Bank and media sponsors Sabah and Daily Sabah, will open next at the Museo di Roma in Trastevere, its fifth stop, and then in the Turkish Embassy in Mogadishu.