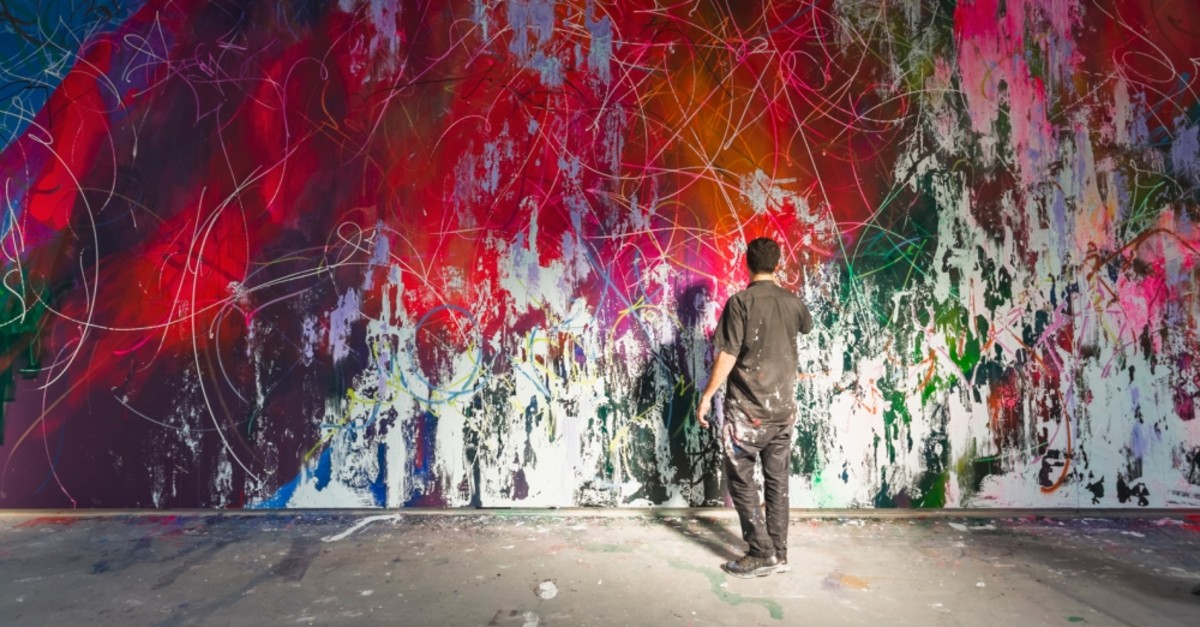 The artistu2019s creations reflect the dazzling load of the worldu2019s walls and the richness in public freedom of expression.
by Zeynep Esra İstanbullu Sep 26, 2019 12:10 am

A contemporary artist who skillfully merges various media and techniques, Jose Parla has created a show specific to Istanbul, which he describes as a geographical, historical and artistic center that inspires

ISTANBUL'74 GALLERY hosts Cuban-born American contemporary artist Jose Parla's show "ISTHMUS" until Sept. 28. The artist's special exhibition for Istanbul, which means land extension surrounded by water on both sides and between two large lands, "ISTHMUS" is one of the panel exhibitions of the 16th Istanbul Biennial organized by the Istanbul Foundation for Culture and Arts (İKSV).

The basis of the exhibition is calligraphic image production, which is the aesthetic and cultural expression tool of the artist. Istanbul, which physically connects the continents of Asia and Europe, acts as the bridge for Parla, which combines the cultures of the East and the West both symbolically and metaphorically. The exhibition, inspired by the geography of Istanbul and presenting what calligraphy can be and can represent for future generations, exhibits the artists' works on paper and glass specially produced for this exhibition.

At "ISTHMUS," the artist makes reference to the historical calligraphy tradition and calligraphy of the city, with its inspiration from well-known museums and collections. 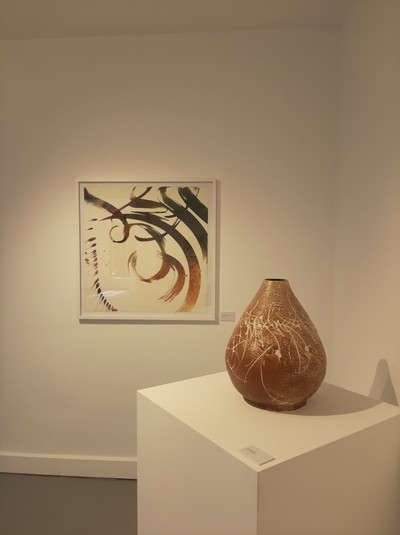 The artist makes reference to the historical calligraphy tradition and the calligraphy of the city, with its inspiration from well-known museums and collections.

Blending the "living textures" of global cities he visits in his works, Jose Parla's creations are included in leading collections such as London's British Museum and Havana's National Museum of Fine Arts. The artist's creations reflect the dazzling load of world's walls and the richness in public freedom of expression. Parla creates questions about which wall of the world we stand on with his insisting, passionate but sincere expression, what we see in the space we live in and what we express there. With his Istanbul project, the artist carries the unique works of calligraphy and graffiti of the city at the same time.

From his canvas works to large-scale global graffiti, his creations expand to video and installation and his works have been presented to various viewers in Paris, London, New York, Milan and Havana. With impromptu movements in his works, he uses various layers and materials found in daily life. This is a reflection of the research style of the urban environments that the artist has brought forth in his works.

Jose Parla describes his first show in Istanbul, "ISTHMUS" as one of a kind because it's particularly about a piece of land that connect two larger pieces of land that has sea on either side. "Istanbul connects the two larger continents with the Bosporus and the bridge. But at the larger political context, Istanbul is also where eastern and western cultures are uniting. Also, I like that it plays on the letters 'IST' standing for Istanbul and Isthmus, so that's very unique," he further adds.

Parla has long been affected and inspired by Istanbul's environs. "I came to Istanbul in 1998 for the first time and felt connected with the city right away because it reminded me of my parents' hometown Havana, Cuba. The weather, being next to the sea, the warmth of the people were all very similar. The energy of the Bosporus, the walls of the town and the calligraphy inscribed on temple walls were inspiring at first sight. I wondered what life was like for the calligraphers of the Ottoman times, and I always dreamed of doing a project that would allow me to pay homage to a culture of masterful calligraphers in world history," he says about the city and continues, "Years later, I met Demet Müftüoğlu Eşeli and Alphan Eşeli, the founders of ISTANBUL'74, I came back to Istanbul a few times as their guest where we started discussing a solo exhibition here. ISTHMUS means 'a strip of land with the sea on either side, forming a link between two largest areas of land.' Similarly, Istanbul is a strip of land connecting two continents, Asia and Europe. For me, symbolically and metaphorically the city becomes a bridge uniting Eastern and Western cultures. So, 'ISTHMUS' pays homage to the history of calligraphy and the memory of Istanbul, whose history spans millennia, drawing inspiration from renowned artists such as Burhan Doğançay, and museums such as the Sabancı University Sakıp Sabancı Museum."

Istanbul is a city that functions for the artist. "It's somewhere you can just walk and walk everywhere. The pedestrian is very friendly. It's beautiful. Istanbul has been and still is a key location with its rich multicultural texture. Also, Ottoman calligraphy is at one point was the center for all the master calligraphers in the whole region. Then, the architecture is something what I really like about the cities and Istanbul has its own flavor. The people are beautiful, the food is delicious. There are a lot of places that you can go on rooftops where you can have coffee or dinner and see the Bosporus."

Istanbul a center for arts

"Due to its long history, the city becomes an important place for art as well. I believe Istanbul is one of the most important cities in the art world and although everybody focuses on New York, Berlin, Los Angeles or London, but Istanbul has a deep history with art. For instance, the Istanbul Biennial is very important as it receives great reviews across the world. It is a great art scene and Istanbul is just going to expand and grow more in the art world," he notes.

Embracing the art of calligraphy

The artist has had a relationship with calligraphy from his childhood on. "I started getting into calligraphy was when I was a child because I remember my parents having very nice handwriting and they were strict about ours being good as well. So, calligraphy was always part of my upbringing, but then when I met the first writers I started to meet painting on the walls. They had amazing handwriting for walls and good hand style. So, they taught me how to do it. Then, I wanted to teach myself how to do it differently - out of respect I didn't want to paint just like them. I wanted to evolve. That gave way to the question of how to incorporate other things into my style and that's when I started looking into East because of their rich history of calligraphy in Persian, Ottoman, Japanese and Chinese calligraphy styles. Ottoman calligraphy has an extensive history and that has always interested me. I have spent a lot of time at Sakıp Sabancı Museum studying the 'Collection of the Arts of the Book and Calligraphy.' ISTHMUS gave me a chance to delve deep into Ottoman calligraphy styles. Also, I'm interested in all kinds of calligraphies, Western, Eastern, ancient, and new. If it's beautiful, I'm interested to learn about it. It is not a matter of what the culture is," he expresses his enthusiasm toward traditional Ottoman calligraphy.

Personal mixture of media and materials

The artist employs various materials and brings about original and new techniques pertaining to his art. "There was one material that I'm working with that behaves differently than what it is in New York. It is kind of a wall compound. We had to test various materials to get the one that felt the best. Then, I created my own mixture by adding some gel medium and powders. I created something new here. That was a bit of experimentation with that. The works on paper are the ones I made in New York for ISTHMUS which are calligraphic works. Besides, there are three sets of ceramics in different sizes, and the shapes are incredible and they're all one of a kind. Also, just through an introduction one afternoon with a friend of the ISTANBUL'74 team, we met Mina Dilber Temo who brought some amazing Turkish fabrics to work with as I wanted to do a big fabric installation because of the height of the entrance to the gallery. I have been dying fabrics and painting and printing on the fabrics. That's the first time I am ever doing something like that. Except that I've made some smaller fabric sculptures that's trajectory comes from," he concluded.