The mad hatter of Istanbul: Halil Altındere on İstiklal Avenue 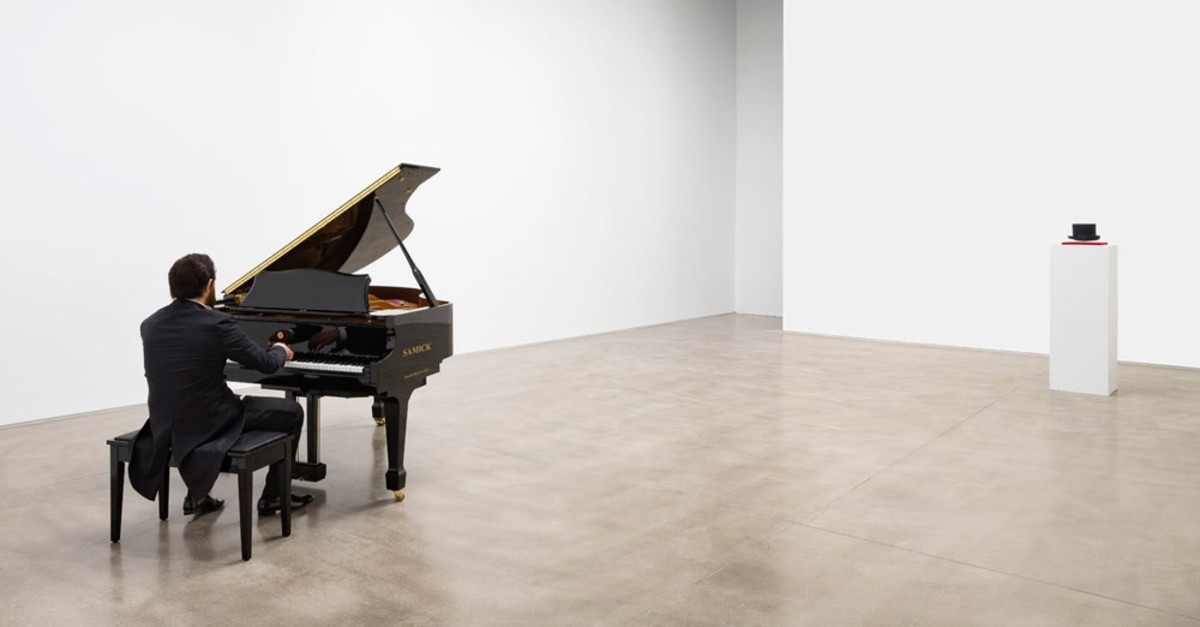 Artist Halil Altındere has returned to Istanbul to grace the second and third floors of the Yapı Kredi Culture Arts complex on İstiklal Avenue. The show ‘Abrakadabra' is a play on the concept of art as trickery, like a mix of storytelling, magic and reality

The age-old incantation, "abracadabra," is popularly used by magicians after performing a trick for an audience. Its origins are cloaked in mystery. Some say it derives from Aramaic, believed to be the spoken language of Christ, for "I create like the word." The Roman physician Serenus Sammonicus was the first to print the phrase in the 2nd century of the Common Era, demonstrating his rare knowledge, which he personally taught to two Roman emperors.

Sadly, his foresight was not strong enough to penetrate the treacherous politics of Rome. His second student, Caracalla, murdered him, but not before he had imparted to the world a treasury of learning informed by his private library of 60,000 volumes. Sammonicus was famous for curing fever by arranging the letters of abracadabra with op-art visuality into literary amulets, a pseudo-medical practice that continued throughout the Middle Ages.

As the title of an art exhibition, the fusty saying has an air of self-fulfilling prophecy, as to impose a pomp of ridiculous, egotistic accomplishment, revealing nothing more fantastic than a bald-faced, underwhelming embarrassment on the part of the would-be trickster at center stage. But in the able hands of Halil Altındere, the gimcrack ostentation of the gesture is nothing less than illuminating, and entirely relevant in the context of the running, visual concept at its core.

The opening piece, "Hands of Houdini" (2019), curated by Huo Hanru opposite the introductory, interpretive wall text, conveys a sense of entrapment, that of passersby who must prepare to enter the world of a creative whose full expression is curtailed by the bigger picture in which he is drawn and quartered. Or, more existentially, its metaphor is the human condition, in which the will to freedom is consummated at the expense of life.

But the work is not entirely unprecedented. In 2009, the Turkish artist Cevdet Erek produced a sculptural installation titled, "Two Double Sided Hands on Grille." He contrasted subjective interiority with its opposite by conceiving twin forms out of the shapes of palms and fingers to imagine being on the inside and outside of a building simultaneously. While the work of Altındere is in many ways incomparably different, its illusive relativity is shared.

The trick of originality

On his path to becoming the artist that he is today, a cornerstone of Turkey's international arts profile, Altındere lied to his parents. As a child in Mersin, after studying in Adana, he had enough of the sleepy Mediterranean coasts of his inner Anatolian upbringing. He told his family that he would enroll in postgraduate studies in the arts, but instead, he was planning to meet working artists, and create himself.

That was 1996, when Istanbul's visual art scene was nothing to write home about, a couple galleries and the biennial. Young artists were practically invisible. He conjured an appearing act together with groups of talkative, likeminded peers, publishing "Art-ist," Turkey's first contemporary art magazine. Globalization, the internet, and Vasif Kortun, former director of SALT, were entering Istanbul's cultural sector.

The 1990s proved to be a decisive era, in which the hearts and minds of Turkey were shaped and guided by unseen forces. Altındere saw unique angles to integrate art into sensitive social engagement as a kind of public dialogue, not only through verbal means, but as a master of misdirection in the art of sight and its other. The earliest work at Abrakadabra is a wax sculpture in his hyperreal style, portraying the late street poet, "Pala Şair" (2008).

The human body is arguably Altındere's main subject for the show at Yapı Kredi. In dress and street attire, he has paid meticulous attention to hair and posture. On entering the initial exhibition hall, a white cube resounds with a self-playing piano. Eerie, minimalistic tones emanate from the unmoving fingertips of the bearded, tuxedoed pianist. The silicon sculpture, "Magic Piano" (2019) begs a close-up, as the degree of its realism is unsettling.

Diagonal across the room, "Hat of Houdini" (2019) rotates over an electric magnet, entrancing with the impression that the vintage black top hat is hovering in space. But his works are not without a sense of humor. Altındere's art is distinct from the touristic, commercial kitsch of Madame Tussaud's wax promenade of celebrities. Abrakadabra is about his storytelling. "Traffic Police Car" (2019) faces "The Monument of an Illegal Street Vendor" (2019).

He who sees double

"The Monument of an Illegal Street Vendor" (2019) is part of Altındere's uncanny bent toward visual witticism, by bringing what is generally perceived as lowbrow into elite realms of society with mirror-like, reflective intensity. The wax sculpture portrays a black street vendor in blue jeans and an Adidas hoodie, his neck wrapped in with outmoded headphones. He stands over a blanket of objects officially itemized as "fake bags of luxury brands."

Altındere has consistently sought to close the gaps that divide people in the cultural sector for some of his best-known works, such as the video, "Wonderland" (2013), produced with the Romani rap group, "Tahribad-ı İsyan," and the monumental installation, "Köfte Airlines" (2016). Among the new pieces at Abrakadabra, are his past hyperreal sculpture, "Boxing Bag" (2012), and an invention out of youth street culture, "Boomerang Skateboard" (2016).

Like his wax sculptures, Altındere continued developing prior themes for certain commissions made especially for Abrakadabra, such as his work, "I Won't Cry for You My Mascara is too Expensive (Adriana Lima)" (2019). The handmade gold necklace is a medium that Altındere explored in 2010 with his Emma Goldman Series, quoting the early 20th century political activist by contrasting her socialist reputation with capitalistic artifice.

From his gold-plated bronze knuckle duster laden with a Swarovski rock crystal, titled, "Solitaire Brass Knocks" (2016), to the gleaming, "Bitcoin Hip Hop Necklace" (2017), his irony knows no bounds. In fact, he even critiques the allure of Turkish emigration with his LED piece, "Germany Sweet Homeland" (2019) made with laser cut metal letters spelling out the title in German. When not training his critical art on the unsophisticated, he takes aim at high culture.

"Art Lover" (2019), and "Sleeping Museum Guard" (2019) satirically depict the activity of recreational acculturation with an eye on Yapı Kredi Bank's collection of gold-framed classic paintings. The role of gold is again emphasized, indicating unsavory human qualities like greed, as shared by all members of society. That it is not easy to tell which visitor, or museum guard is actually human is Altındere's greatest ruse. Art is magic when the artist gives life to his work.