The art of locals: Turkish artists from 'The Seventh Continent' 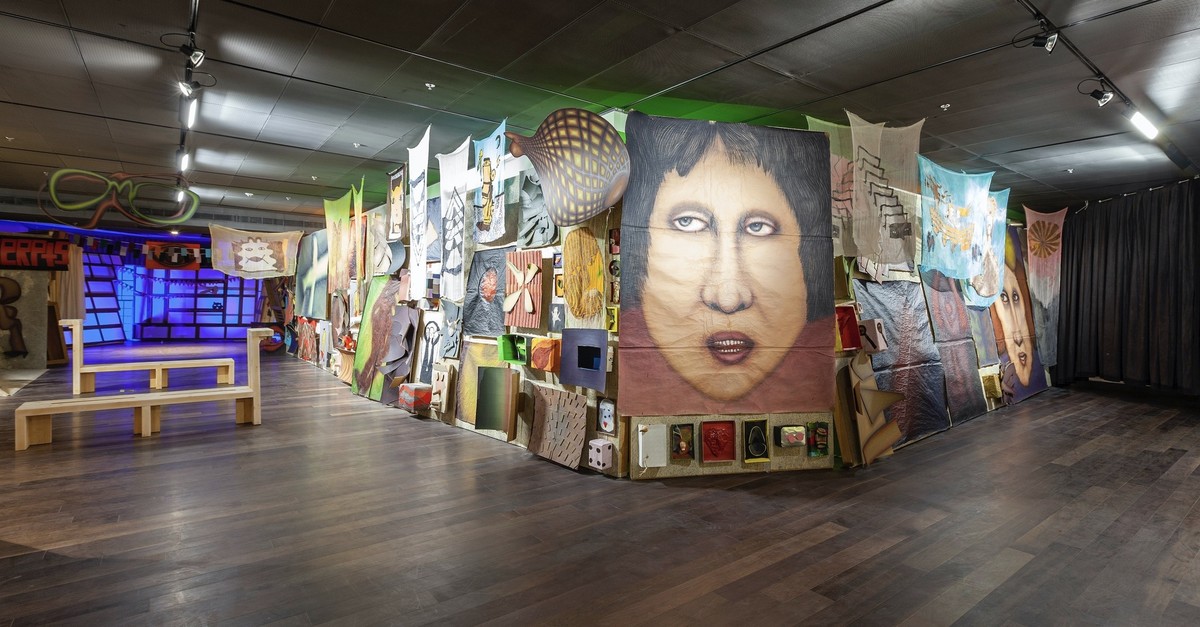 Of the 56 artists and collectives participating in the 16th Istanbul Biennial, eight are Turkish. Nicolas Bourriaud, the curator, upholds the international reputation of the city's flagship art event with his global scope, focusing his approach on the sprawling metropolitan region as defined by the Anthropocene

Within the unfinished complex of the Istanbul Museum of Painting and Sculpture, slated to open in the spring of 2020 newly design by Turkish architect Emre Arolat, another world has sprouted from the warming oceans of human imagination. Güneş Terkol and Güçlü Öztekin posit an art practice in which creativity is a vision of sheer will, unfading persistence and collaborative optimism in the face of innumerable self-destructive crises that arise simply by being alive, imperfect and sentient on Earth in the 21st century.

Above the constant rattle of construction gutting and rebuilding the ancient port of Tophane, the dust of "The Seventh Continent" is only just settling after its initial crew of pioneers from the art world cleared its interior to welcome the public for the first time. The globalized masses gaze at the mysteries it has curated into a diverse platform for raising common consciousness. Its curious urban explorers enter a storm of exhales, invoking the potential triumphs and trials that await the next generation of humanity.

The perilous confrontation with climate change is a defining cause for the young people of the planet. For them, another world is not only possible, it is necessary. In response, artists regardless of age from across the globe are visualizing the tremors and rifts that have come to invigorate universal cultural expression with a cause for wholesale social change in every private domain, professional field, remote geography and local community. Whether digital or local, personal or institutional, social contracts are being rewritten to protect the environment.

Individualism has long been a source of intellectual freedom, its philosophies celebrated as the political climax of Western thought. But, collectives, such as the Istanbul-based HaZaVuZu founded jointly by Terkol and Öztekin, demonstrate a powerful alternative, particularly when purposed for creative appreciation as an unrestricted, communal experience. "WORLBMON" (2019), a temporary construction installation of wood, mixed media, drawings, sculptures, sewing and boxes, illustrates Bourriaud's notion of artistic polyphony.

At its beginning, the way into "WORLBMON" is austere, a simple corridor of wooden panels narrowing into a darkening, winding passage. A black curtain conceals the installation's heart. The core concept revolves around the postindustrial convention to recycle nonrenewable waste products, which, despite its best intentions, often still exacerbates the problems of perceiving the universe through purely materialist lenses. Terkol and Öztekin reveal the malleable nature of reality, into which they merge through their work.

The fundamental idea to collectivize, in the style of HaZaVuZu, is to blur the line where one artist ends and the other starts, where individuality becomes one with its surroundings. "WORLBMON" has the whimsical air of the naive, like a school project or an Art Brut festival. Overlapping painted fabrics and paper-based mixed-media transcend dimensional duality. Faint but richly colorful visages hover beside semi-abstract humanoid figures that seem to waver in the windless room beside depictions of flightless birds and garden vegetables.

In an Istanbul state of mind

About halfway through "WORLBMON," a sliding door leads out to a balcony overlooking the storied confluence where the Bosporus strait meets the Golden Horn inlet and the Marmara Sea. The historic peninsula juts out into the bustling waters. Before the stretch of blue horizon, multilevel concrete infrastructure rises with the brutal geometry of a massive engineering feat, half-done and bare to those whose eyes are sharpened with a passion for visual art, as a vehicle for enlightened seeing. A hammock is tied where the marine cityscape unfolds outward as a kaleidoscopic parallel to the maze of sights within the biennial venue. It facilitates upward looking, which is freshly enunciated by the sculptural works of Müge Yılmaz, who hybridizes plants, humans and animals into shapes reminiscent of prehistoric mythopoeia. Her installation, "Eleven Suns" (2019), conveys her impressive range as a trans-disciplinary artist with a voracious appetite for feminist science fiction steeped in the origins of her nation's buried, mystifying cultural history. Yılmaz readapts visual cues from the graphic metaphors of otherworldly storytelling as they have appeared since time began, from the Anatolian plain to the Andes. With her series of handcrafted birch sculptures, she references the extinct fauna of Turkey and its petroglyph archaeology to uncover the depths of the land's untold human impact. The best known archaic rock carving site in southeast Kazakhstan is the chief muse for a tailed figure crowned with beaming concentric circles by Yılmaz titled "Tamgaly Goddess" (2019).

Ozan Atalan returns the archaic concept of the power animal back to the hard soil, also critiquing the ongoing industrial upheaval of human settlement. His installation, "Monochrome" (2019), includes a dried, well-preserved water buffalo skeleton, splayed out on a raw concrete surface. The black horns of the endangered creature, its elegant bone structure, particularly its skull, evoke the forgotten pride of a way of being lost to the imbalance of humankind in relation to its planetary ecology.

Opposite the downed, decaying water buffalo, a pair of monitors offers views of Istanbul's manufactured landscapes. Aerial drone photography contrasts the carved, dug earth, discolored and jumbled, flattened and consumed, with vanishing water buffalo habitats. The lumbering beasts graze under leafless trees to eat spotty grass and then tramp beside highways and towers in slow, unknowing herds. The mournful effect is like watching innocent victims march to their deaths.

A more tender, personalized immersion with the Biennial artists' regional surroundings is one of the many endearing qualities of artworks by Elmas Deniz, whose approach to conveying topographic change in the Anthropocene brought her back to where she grew up in Bergama, Turkey. Her meticulous research of the land's lost creeks is illustrative and conceptual, excavating Roman-era findings with an eye for perennial, naturalist beauty. One piece, "History of a particular nameless creek [Pinna Nobilis]" (2019), exhibits shells of the Pinna Nobilis, a large species of Mediterranean clam threatened with extinction. It can grow as long as 120 centimeters. Deniz visualized an exquisite homage to its tragic, yet angelic afterlife.

And on Büyükada, across the Marmara Sea, the artist Hale Tenger audio-spotlighted her voice as projected from a decrepit stone mansion for her installation, "Appearance" (2019). Encircling an ethereal installation of black obsidian mirrors interspersed among reflective pools in the garden of an abandoned, highland overlooking the marine ecosystem of Istanbul, her voice whispers a poem in Turkish and English. "I was a fruit tree," she recites. "I bore my fruits, I gave, without expecting reciprocity."