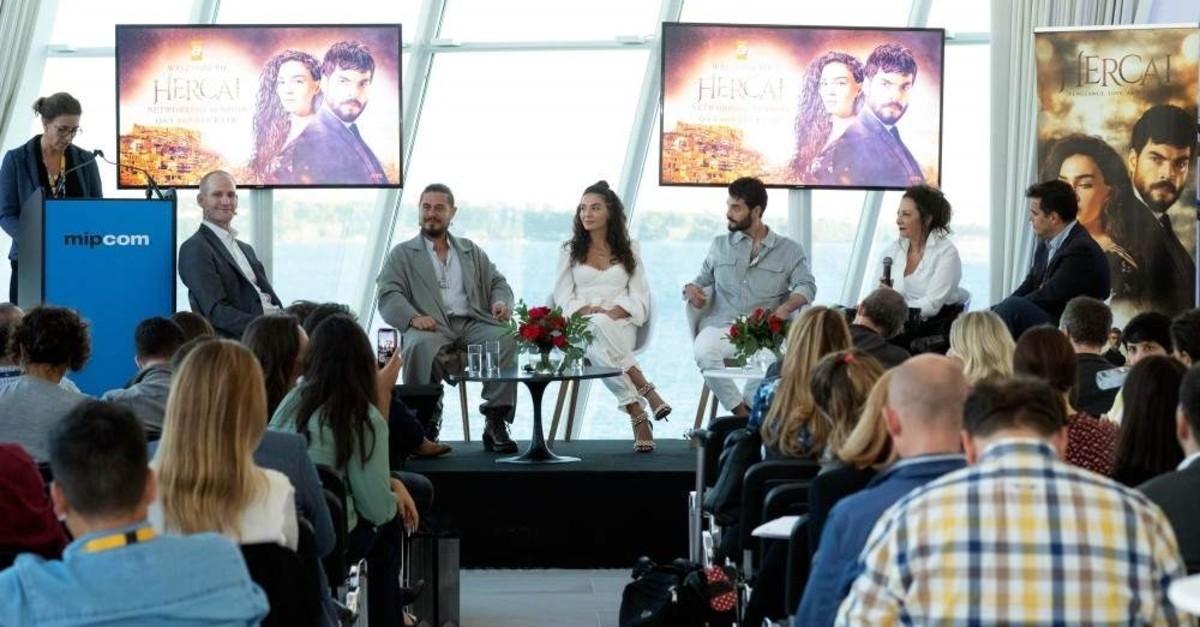 While Turkish dramas have made their mark in Cannes with MIPCOM, ATV's successful production 'Hercai' and forthcoming TV series 'Kuruluş Osmanlı' sweep the expo

Organized in the French town of Cannes, Europe's biggest TV content expo MIPCOM gathered thousands of sectoral business delegates once again. While the boom of Turkish drama is a huge sensation, ATV's arrival in Cannes with a group of talents, producers and management was eye-catching both for the press and the business professionals.

ATV's record-breaking series, not only on TV but also on digital platforms, "Hercai" ("A Fickle Heart") was there at Cannes with the whole cast. The cast gained love and attention with their sincerity, meeting with visitors at their Q&A and Networking Session. The three lead actors of the series, Ebru Şahin, Akın Akınözü and Ayda Aksel, and the directors Cem Karcı and Benal Tairi, who were accompanied by AtresMedia's head of sales and acquisitions, Jose Antonio Salsa Baratas, took part in the session. The event was moderated by the editorial director of C21 Media, Ed Waller. The poster of the series, which shoots in Turkey's mystical, southeastern Mardin province, was all over the streets of Cannes and fans were delighted to see the lead actors of the series there. The famous actors gave back all the love they received by taking selfies and shaking hands with their fans.

The series "Sıla" and "Sen Anlat Karadeniz" ("Lifeline") were also a huge success on Spanish TV channels. While thanking the ATV management, Baratas emphasized the importance of the intense attention Turkish series have received from all over the world, declaring that "Hercai" is believed to be breaking rating records.

One of the co-directors of the series, Cem Karcı, stated that the mere success of the series on TV and digital platforms is based on the way they do their work with love. His directing partner Benal Tairi explained how and why the name "Hercai" was chosen for the series, telling the story behind the fantastic 'pansy' flower as it is called in English. Pansy is the flower of love that does not bloom in the snow. Although snowdrop and pansy agreed it would, snowdrop eventually did all the work to push through the snow.

Five women screenwriters are behind the scripting of "Hercai." They tailored a very important role for Ayda Aksel who embodied the highly dominant character of an Anatolian woman. Aksel herself declared she had never played the role of someone this powerful before, and producer Banu Akdeniz helped motivate her.

Ebru Şahin was asked about the story behind the blue Syriac necklace she was wearing. She said that the beholder of the necklace is protected from the evil eye.

Akın Akınözü, in turn, stated that perhaps his character in the series is so lovable because it was created by five women.

Last of all, Akdeniz, the producer of the series, stated in the Q&A that she believes the script is powerful because it is written by women. These women scripting love in a very pure way is the very element that enables a story demonstrate true love. She said this is reflected through women since women know how to love and how to reflect it.

Before a final networking cocktail, the cast took many selfies and gave more interviews. Each guest was given the same blue Syriac necklace that Reyyan wore as a gift for their valuable presence.

From a tent to an empire

ATV's new series "Kuruluş Osman" ("The Ottoman") was also presented to the media for the first time at Cannes. An Ottoman tent, styled after the series and located in the garden of Le Grand Hotel, drew intense attention from visitors, sectoral pioneers and the international press. 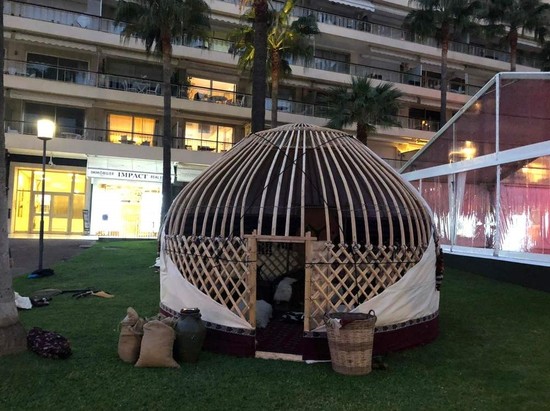 An Ottoman tent located in the garden of Le Grand Hotel for the press meeting of "Kuruluş Osman."

Based on the originals from the movie set of "The Ottoman," the tent was built to be visited by guests for five days. It was made out of the materials used to construct the tents used in "The Ottoman", which was produced in Turkmenistan, and a host and hostess at the tent wore the historic dress of that era of the Ottoman Empire. Visitors to the tent were fascinated by the historically-accurate demonstration of Ottoman times. 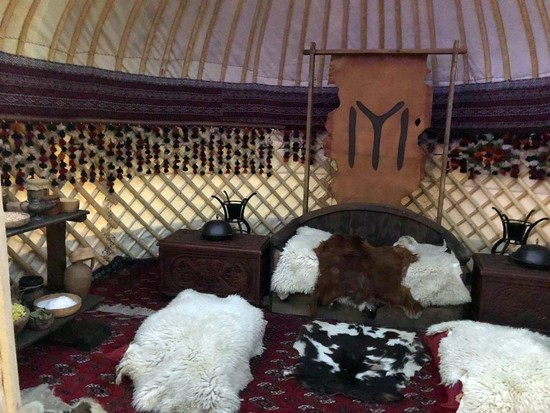 A view from inside the Ottoman tent.

At the official launch of the Ottoman tent, a huge crowd formed to see Burak Özçivit, the lead actor of "Kuruluş Osman." Özçivit kindly posed for photos with the visitors, soaking up the attention of the press and fans on the red carpet. He also answered reporters' questions during a visit to the ATV booth. 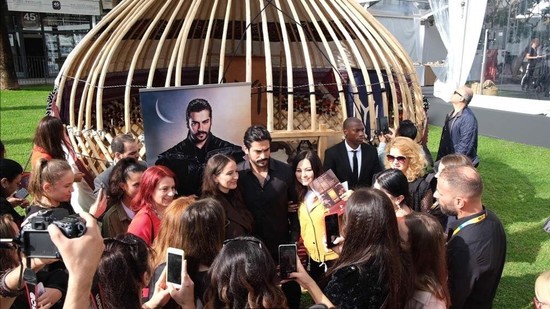 The launch of the Ottoman tent began with a speech by producer Mehmet Bozdağ. Bozdağ described the magnificent empire that was built from a tiny tent. He emphasized that his massive team had created a very detailed movie set, working from recorded historical facts, thanking ATV management and the crew. 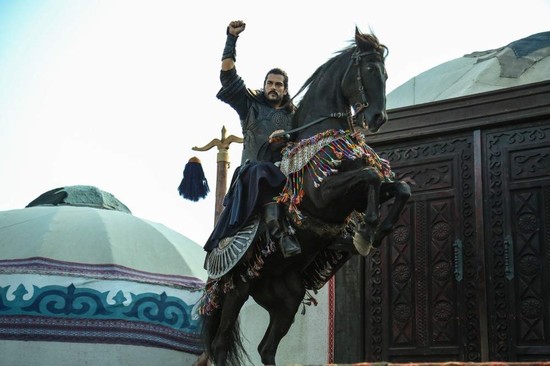 After the producer, Özçivit took the stage. He stated that "The Ottoman" would tell the story of how an empire was established on the concepts of love and devotion. Özçivit added that he has been preparing for this role for almost a year with the help of the concept of love. Özçivit, a main attraction for the press, once again managed to conquer hearts at the event with the time and care he dedicated to each fan, and his professional presence.

On the second day of the four-day fair, "Hercai" was sold to Bulgaria, Albania and Spain for broadcast while pre-reservations for "Kuruluş Osman," the shootings of which have not started yet, were made for television stations in Afghanistan, Albania and Pakistan.

Turkish TV shows are currently being broadcast in 156 countries, and Turkey ranks second after the U.S. in global TV series exports. One of these countries is Egypt. Due to strained political ties between Turkey and Egypt since 2013, the government has called for a boycott of Turkish TV series. Despite these boycott calls, the Turkish series stand out among the most watched in the country. The actors of Turkish TV series, which have gained great reputation in the Arab world, are also Egyptians's favorite. The series has also increased interest in the Turkish language. Some Egyptians say they grew to adore the Turkish language thanks to the series and that they have started Turkish courses at the Cairo Yunus Emre Institute.