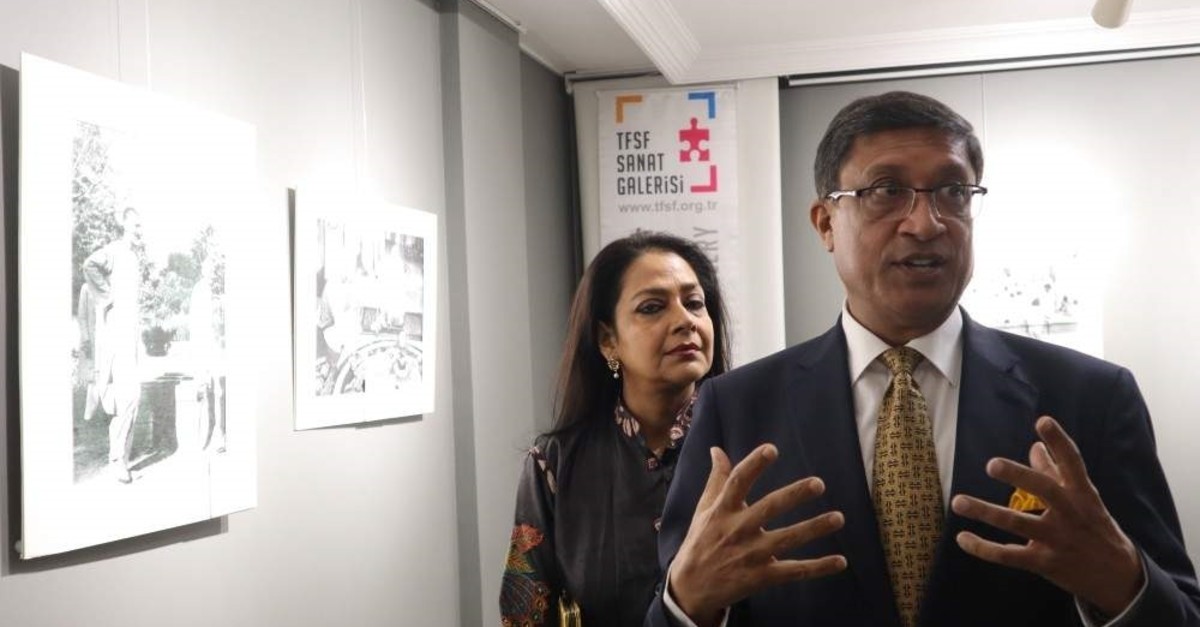 The photos of Indian independence leader Mahatma Gandhi taken by Kulwant Roy, one of the first freelance photojournalists, who worked through the pre and post-independence era of modern India, were exhibited on Friday in Ankara, letting the people walk through history. The rare archival photos exhibition was prepared in collaboration with the Photographic Arts Federation of Turkey (TFSF) and the Embassy of India.
“One thing we really loved about Gandhi was his smile and how he would always make a personal connection with everyone – man, woman, whoever it was,” the Indian Ambassador to Turkey Sanjay Bhattacharyya stated.
The exhibition displaying the 40 rarest negatives and prints of Gandhi, some of which were restored, have been curated by eminent Indian photographer Aditya Arya. These are from the collection of photographs taken from the 1930's to 1960's.
Commemorating the leader, Bhattacharyya explained a photo where Gandhi was getting off a third class train wagon “I want to share the stories of Gandhi’s travels across the country because he would travel a lot, in those days he would travel by train. Gandhi would always travel third class, because it was the cheapest. In addition to followers that would come with him, he would often have a couple of goats with him because he loved to drink their milk.”
Born in 1914 in the village of Bagli Kalan, Ludhiana district of Punjab of undivided India, Kulwant Roy began recording the activities of the Indian National Congress as a young man. Back then, photography was an arduous task and thus there were very few photographers. For a photographer to survive he has to sell his photographs, but there were hardly any publications at the time. That’s why this genre of journalism was very limited.
Over his career, he shot numerous photos of the heroes of the Indian freedom struggle movement, including Mahatma Gandhi, Jawaharlal Nehru, Sardar Patel. His camera captured some these leaders at close proximity, while they charted the course of a new India. For a long time, Kulwant Roy’s work was lost to obscurity. Only of late, through retrospectives, has he received due appreciation as one of most exuberant and prolific visual chroniclers of 20th century Indian history.
Last Update: Dec 20, 2019 1:53 am
RELATED TOPICS