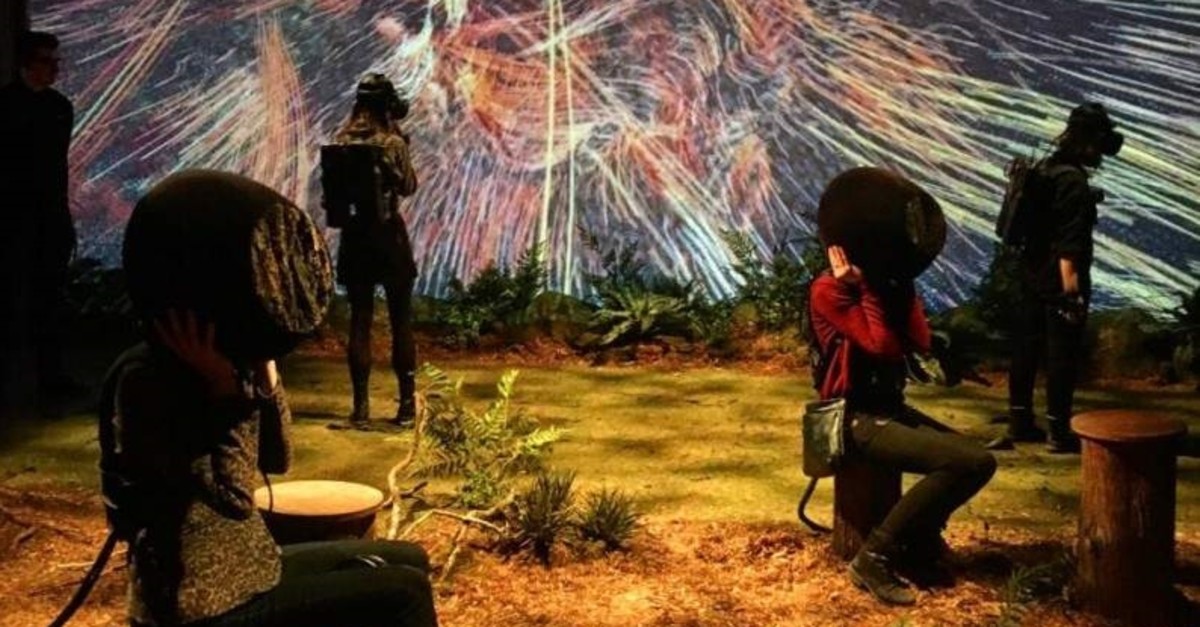 by Daily Sabah Nov 24, 2019 3:28 pm
Ersin Han Ersin, creative director of Marshmallow Laser Feast, the world's leading digital art platform, is set to host a series of talks and workshops at Odunpazarı Modern Museum (OMM) in Eskişehir province.
As of September, Ersin Han Ersin has been running two projects aimed at art lovers, which push the boundaries of virtual reality in a multi-perception 3D installment experience. He will be at the museum to conduct interviews and workshops from Nov. 26-28.
In a talk entitled “Senses in the Anthropocene Age,” which hits the stage from 06.30 p.m. to 07.30 p.m., Tuesday, Nov. 26, Ersin Han Ersin will discuss the impact of human activities on the planet and their reflection on the artistic production process.
At a workshop titled “Describing Nature in Virtual Reality” from 06.00 p.m. to 08.00 p.m., Wednesday, Nov. 27, Ersin Han Ersin will explain the process and technique behind the “digital fossils” series, in which Marshmallow Laser Feast has transferred endangered plants and animals to the digital age.
At the second workshop, “An Imaginary Nature for Virtual Reality," scheduled to take place from 10.00 a.m. to 03.30 p.m., Thursday, Nov. 28, children aged 7-12 will be encouraged to capture the natural environment of their dreams, coming with their favorite toy and learning how to transfer their imagined “nature” to virtual reality.
Two big 3D installments
The British art collective Marshmallow Laser Feast is known for its work in combining technology, data, science and art to break new ground in the field of virtual reality. Just a sample of the collective's larger-scale virtual reality experiences include “Treehugger” and “In the Eyes of the Animal,” a multi-sensory installation open at the OMM until Dec. 7, 2019. Vodafone Red is the digital communication sponsor of the program.
“Treehugger” and “In the Eyes of the Animal” go on show in line with the OMM’s mission of encouraging exhibitions which are environmentally friendly and which draw attention to current issues through the combined media of technology and art. The program aims to dazzle audiences by revealing the full potency of the natural forces which surround us every day and helping us recognize the importance of the organisms with which we share our planet.
“In the Eyes of the Animal” was developed using unmanned aerial vehicles, LIDAR and CT scanning technology and 360° cameras in the U.K.’s Grizedale Forest. The data collected was combined with computerized photogrammetry techniques, adding sound and vibration recordings collected from various forests of the U.K. This resulted in a stereophonic, meditative and hyper-realistic experience and an artistic interpretation allowing one to explore nature through the eyes of four species of forest animals, namely, owls, frogs, mosquitoes and dragonflies. “
"Treehugger,” showcased for the first time in Turkey at the Odunpazarı Modern, has recently received the Tribeca Film Festival's “Storyscapes” Award for its innovative approach to 3D storytelling.
The exhibit is the first of Marshmallow Laser Feast's ongoing projects, which aim to make a virtual archive of rare and endangered trees, beginning with the Giant Sequoia. The main objective of the project is to create digital fossils and virtual spaces in order for people to connect to the natural world. “Treehugger” was developed in collaboration with the Natural History Museum in London and University of Salford and harnesses Wawona, LIDAR, White Light, CT scanning techniques.
The project provides viewers with a breathtaking experience that challenges conventional perceptions of space and time.