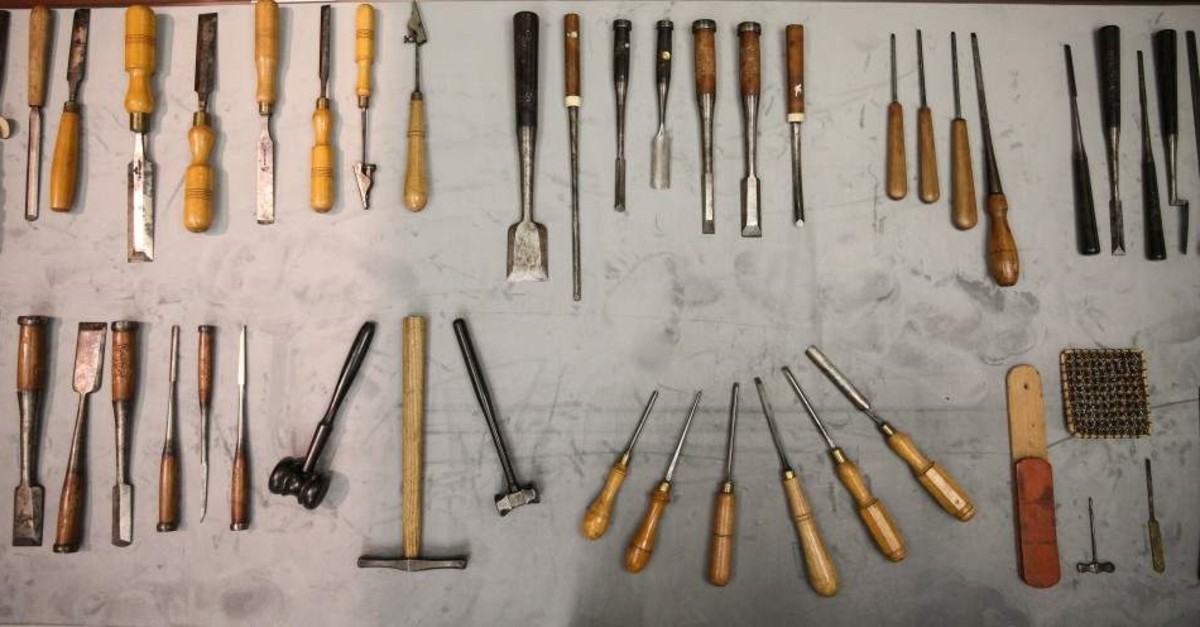 The personal carpentry sets of the sultan comprise of tools of different sizes and types. (AA Photo)
by Anadolu Agency Dec 11, 2019 8:11 pm

The sword, whip, carpentry tools, prayer beads and gold seal of Sultan Abdülhamid II, which are registered to the Yıldız Palace Collection by the National Palaces Administration, are on display at Palace Collections Museum in Istanbul’s Beşiktaş district.
Palace Collections Museum official Güller Karahüseyin provided information about the royal artifacts, saying, “Sultan Abdulhamid always appreciated art and artists along with his strong personality, management understanding, and political and social policies. Every Ottoman sultan has interest in different art fields. Sultan Abdulhamid was interested in carpentry. In the Yıldız Palace complex, there was a private small carpenter's shop for the sultan, where he relaxed while working. He produced many specially-designed items with the fine craftsmanship here.”

“Among the carpentry sets of the sultan, there some sets that were given as a present from Japanese Emperor Meiji. We see that the Japanese imperial coat of arms chrysanthemum flower was engraved on them,” Karahüseyin continued.

On the gold seal, the sultan’s tughra is clearly seen. There are two prayer beads, while carpenter's pencils of different sizes and types are also on display.

These types of historical pieces belonging to the sultans started to attract more attention in recent times with the Turkish TV series that bring the history of the Ottoman Empire to screens around the world. These TV series, such as “Kuruluş Osmanlı” (“The Ottoman”) and “Diriliş Ertuğrul” (“Resurrection Ertuğrul”), are also broadcasted at foreign channels abroad and have a large following.