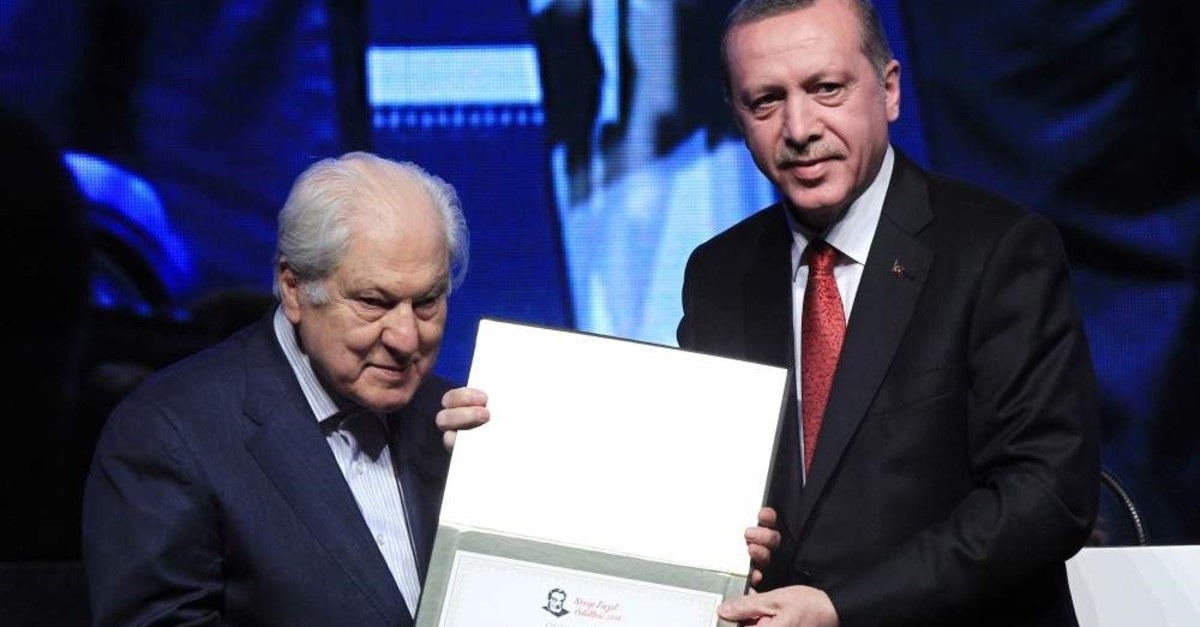 Nuri Pakdil, who was selected to receive the Presidential Culture and Arts Grand Awards posthumously this year, was presented with the Necip Faz?l Award by President Recep Tayyip Erdo?an in November 2014. (AA Photo)
by Daily Sabah Dec 12, 2019 5:33 pm

The winners of the Presidential Culture and Arts Grand Awards were presented with their awards at the presidential office by President Recep Tayyip Erdoğan. The awards are held in honor of citizens who have produced work that contributes to the country's cultural and artistic heritage for future generations and who have prepared the groundwork for the rise of culture and arts across the world. This year's recipients were chosen by the Presidential Culture and Art Policy Board and announced a few weeks ago.

MFÖ is well celebrated across Turkey and beyond, and noted for their vocal harmonies and distinctive style. Uçakan has directed a number of big screen and TV hits showcasing national and local identity. Erbil received the painting award for having introduced a fresh approach to Turkish arts and incorporating cultural traditions into his abstract works and landscapes. Başar performed calligraphy and marbling arts, allowing these traditional art forms to be handed down to new generations. Kuban was awarded for his theoretical and conceptual studies on the history of Turkish architecture and restoration activities, while Ocak was selected in the social sciences category for his contributions to history and cultural historiography.

Late writer Nuri Pakdil was also selected posthumously for his unique works, which are filled with keen ideas regarding the sovereignty of native thought, written using a literary style that has added countless terms to Turkish literature. The presidency's loyalty award was posthumously presented to the late Deputy Culture and Tourism Minister A. Haluk Dursun, in honor of his tireless efforts to preserve Turkey's most valuable historical sites for future generations and to keep the spirit of Anatolian, not to mention Ottoman, unity alive.