Fuat Başar: Master of the Turkish art of marbling 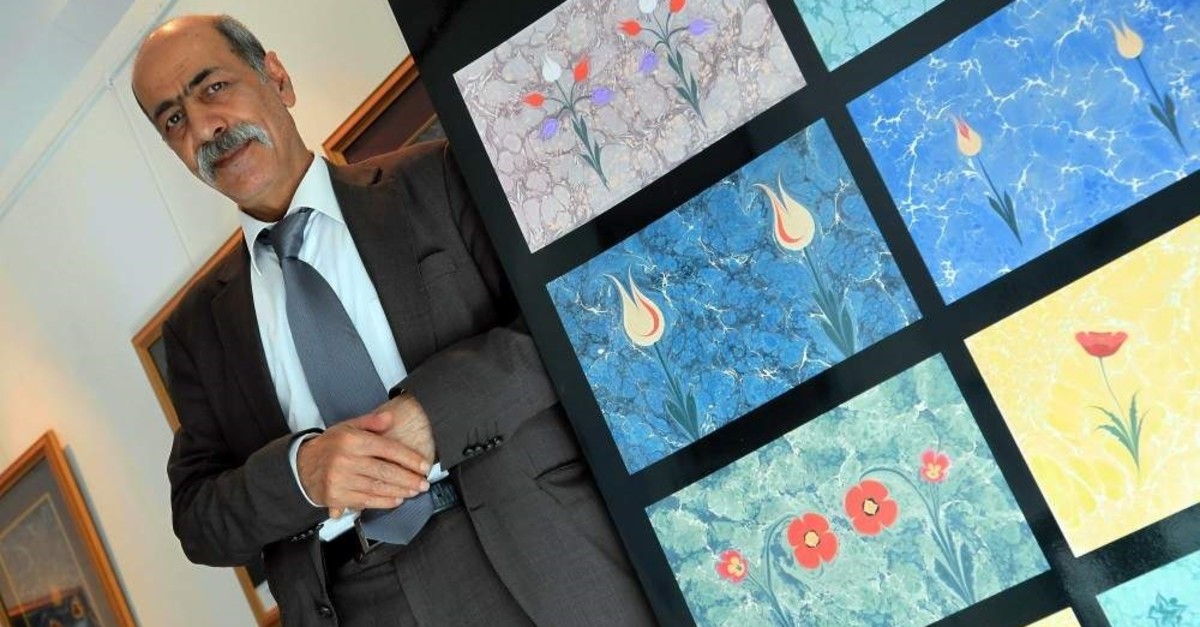 Fuat Ba?ar poses with some of his works at the ,Golden Tulips, exhibition.
by Hakan Arslanbenzer Dec 19, 2019 9:08 pm

The Turkish art of marbling involves creating vibrant patterns by sprinkling color pigments on oily water before transferring them on paper. Artist Fuat Başar is one of the contemporary masters of marbling

Unlike other Islamic arts in Turkey, marbling, or "ebru" in Turkish, has a history that predates the Islamic period. The art of marbling has a long history. With its roots in Turkistan, the art came to the Uighurs before being perfected by the Ottomans.

As one of the most popular Islamic arts, especially in Turkey, it is even more widespread today than it was in the past. The fact that the materials required for marbling are relatively cheap, the time needed to produce it is short and the technique is easy to learn and practice by oneself all form the basis of the prevalence of the art.

The first examples of paper marbling date back to eighth-century China. From China, it spread to Japan in the east and Turkistan, Iran and Turkey in the west. It then passed on to Europe from Turkey. The word "ebru," etymologically, comes from the Persian word "ebrî," meaning "nebular, cloudlike." It is a mere phonetic coincidence that today it is pronounced as ebru, meaning "eyebrow" in Persian. Due to its wavy, nebular appearance, it is called "marbling" or "paper marbling" in Europe.

Naturally colored stones and soil are used and ground for hues and a base for the paint. The paint is mixed with a little water. A 6-centimeter-deep zinc marbling tray, the size of the paper on which the marbling will be transferred, is then selected. In the past, pitch coated wooden trays were also used. The water is then mixed with tragacanth, meaning it is thickened so that it does not dissolve the paint. After the water and the paint are ready, the paint is sprinkled instinctively onto the surface of the water and the nebula-looking paint is given different shapes with a special marbling brush or stick. The image is then transferred to a surface, usually paper, sometimes cloth or other objects, by placing the desired medium directly on the surface of the water.

The art of marbling is unique because it cannot be imitated or replicated. Every piece is unique thanks to the marbling artist's technique; however, the techniques and styles have a history in themselves. For instance, Necmeddin Okyay, one of the last Ottoman masters of the Islamic arts, invented scripted marbling, which can be described as Islamic calligraphy done through marbling techniques. Okyay would script calligraphy with a special glue, dry it and use the piece featuring the calligraphy to transfer the marbling. The glued sections would not dissolve in the marbled water and the script would retain its original color on the paper. This technique added a more personal style.

Okyay mentored many artists, including Mustafa Düzgünman, who in turn also taught many others after he graduated from the Turkish Ornamental Arts department of the Fine Arts Academy in Istanbul. Fuat Başar, a 2019 Presidential Award winner, is one of those disciples. Başar received "icazet," literally "permission," from Düzgünman, which functions like a diploma of a special art technique, meaning that one can apply the technique of their master in their own work.

Fuat Başar was born on March 7, 1953, in the northeastern province of Erzurum in Turkey. After graduating high school, he enrolled in the Faculty of Medicine at the city's Atatürk University. In 1976, he read "Kalem Güzeli" ("Beauty of the Pencil") by Mahmud Yazır, brother of the Islamic scholar Muhammed Hamdi Yazır, a translator and interpreter of the Holy Quran. This was a book on the history and aesthetics of Islamic calligraphy, which made him start practicing calligraphy on his own with a carpenter's pencil.

Başar decided to communicate with the masters of Islamic art; thus, he wrote letters to Hamid Aytaç, the greatest Islamic calligrapher of the Turkish Republic, and Mustafa Düzgünman, the greatest marbling artist after Necmeddin Okyay. Both replied to him, and the correspondence continued for three years until Başar left the Faculty of Medicine for Islamic calligraphy and moved to Istanbul in 1980 to receive private courses from both masters.

"It looked like I was trying to become a surgeon by writing letters. I understood that I couldn't become an Islamic calligrapher by communicating with masters through writing only. You should see the actual work with your eyes. I think both science and art rely on the master-disciple relationship," said Başar on his journey to becoming an artist.

After moving to Istanbul, Başar received his diploma on Islamic calligraphy from Hamid Aytaç the same year. He continues scripting calligraphy works today.

He said calligraphy has allowed him to make a living since marbling cannot make enough money. Başar could only get his diploma for marbling in 1989 because his teacher Mustafa Düzgünman would not accept many students.

Fuat Başar has held more than 100 solo exhibitions and participated in many group exhibitions. He has also been mentoring students for years now. Başar received this year's Presidential Culture and Arts Grand Award as a calligraphy and marbling artist for "allowing these traditional art forms to be handed down to new generations."