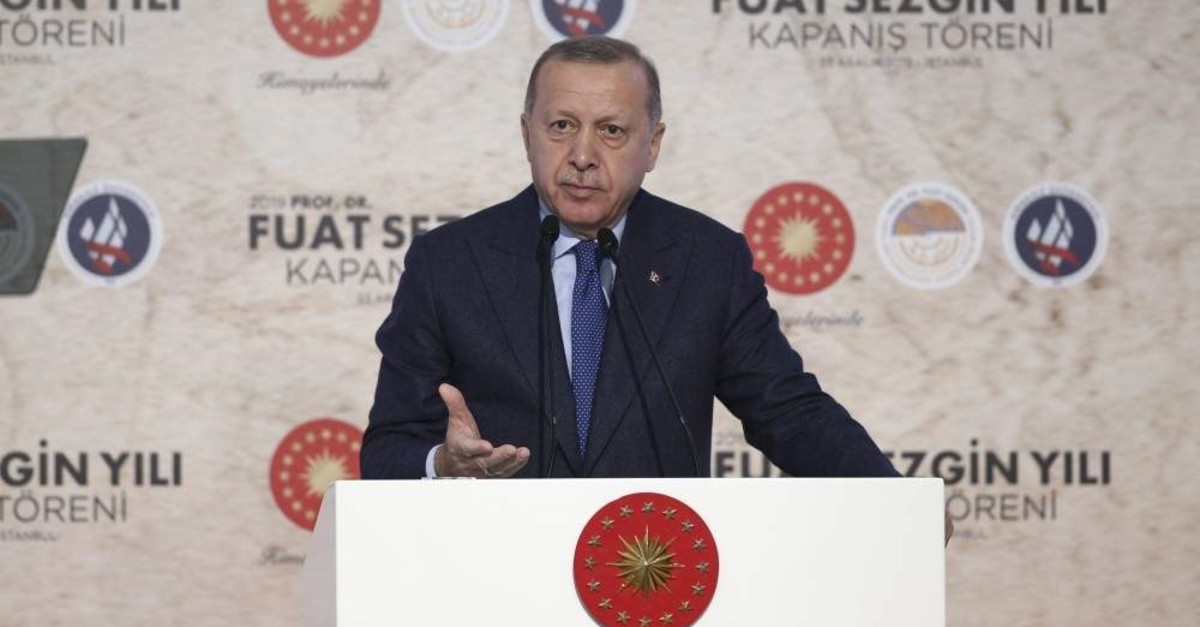 President Recep Tayyip Erdo?an speaks at the closing ceremony on Dec. 23. (AA Photo)
by Daily Sabah with AA Dec 23, 2019 5:31 pm
The Turkish government officially declared 2019 the Year of Fuat Sezgin, a prominent professor who passed away in July 2018. A professor of Islamic science, Sezgin was one of the most respected historians of Islamic science and the recipient of the Presidential Culture and Art Grand Prize before his death last year at the age of 94.

On Dec. 23, the closing ceremony of the year of Fuat Sezgin was held at Istanbul Airport. Also, an exhibition titled "The Pioneers of Modern Science History of Islamic Science and Technology" was inaugurated at the international terminal by President Recep Tayyip Erdoğan. Speaking at the ceremony, President Erdoğan congratulated the curators of the exhibition, which he considers important to understand the past and make sense of the future, and the operators of Istanbul Airport.

Erdoğan stated that professor Fuat Sezgin, on behalf of whom a special section was featured in the exhibition, will be always remembered with gratitude for his contributions to the history of Islamic science and technology. "The special sections here constitute the golden pages of our civilization. I would like to express my gratitude to all those who have made an effort to introduce this wonderful accumulation that has built a bridge from the past to the future," he added. The exhibition at the airport will remain open for a year.

Indicating that Islamic civilization is full of knowledge and wisdom, Erdoğan continued: "The Islamic world, which made Istanbul, Cairo, Damascus and Baghdad centers of science and culture throughout the centuries, is able to realize a resurrection that is worthy of its history. Our Istanbul, which is one of the most important carriers of the people's accumulation for thousands of years, will hopefully host the greatest breakthrough in the future. I believe that our brothers, sisters of all ages, especially our children, who will visit the exhibition, will have expanded, deepened and enriched civilization perspectives."

"Restringing science, past and present, to the West alone, and ignoring Muslim scholars can only be explained with ignorance if it is not intentional," Erdoğan said, adding that Islamic thinkers and scholars have conducted multifaceted research since the eighth century that will be a source of scientific thought. "For instance, it is Al-Khwarizmi who gave the algorithm its name. It is Al-Kindi who brought the measurement of angles by the compass into geometry. It is Al-Kashi who developed decimal fractions. It is Al-Zarqali who measured the Earth's distance from the sun and made more than 400 observations in Toledo about solstice and equinox," he expressed.

Erdoğan concluded by emphasizing that humanity has made admirable progress in science and technology and noted: "Surely, science requires a lot of labor, patience and perseverance. Biruni, for instance, walked from Ghazna to Baghdad for two years in order to measure longitude." Remarking that Fuat Sezgin was a scientist who spent 17 hours a day working and regretted not being able to work more, Erdoğan added: "Fuat Sezgin, who helped rediscover this wealth through his works in the field of Islam, science and technology, said, 'A revival has begun in Turkey.' He was speaking about the huge accumulation of knowledge he had compiled."
Last Update: Dec 23, 2019 6:38 pm
RELATED TOPICS