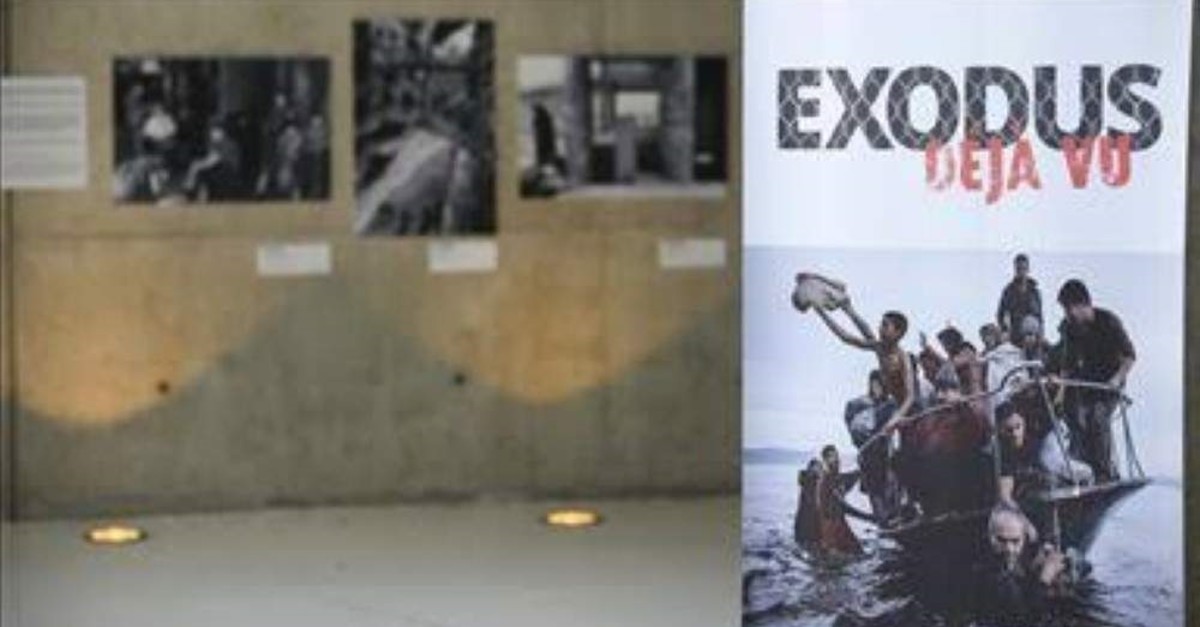 The photo exhibition brings together works of 12 photojournalists. ( AA Photo)
by Anadolu Agency Dec 29, 2019 5:20 pm
An exhibition of the works of renowned photographers who documented the travails of refugees will tour European and U.S. cities in 2020, said its organizer. Titled "Exodus: Déjà Vu," it is an attempt to raise awareness on the refugee crisis around the world, Patrice Vallette, the director of Kuala Lumpur-based arts and culture agency Visioncy, told Anadolu Agency (AA). "We're now discussing with the United Nations (to hold exhibitions) starting from the 20th of June (World Refugee Day) 2020 and starting from New York," he said.

The photo exhibition brings together works of award-winning photographers who have closely followed and captured the perilous journey of refugees, according to its website. The first exhibition was held in 2016 in Kuala Lumpur, followed by showings in Bangkok and Ankara, the Turkish capital, in 2017. The photos were displayed this November in Chiang Mai, northern Thailand. Anadolu Agency is the global communication partner of the project. "Now we're working on getting the project to be seen more in Europe," Vallette said. The show is expected to visit other U.S. cities such as Washington and Los Angeles. "We're actually working on the details on getting the exhibition to Tijuana, Mexico as well," he added, referring to a northern Mexican city where thousands of migrants are awaiting U.S. asylum.

The whole project began with a conversation between Vallette and veteran Turkish photojournalist Coşkun Aral. While preparing a special evening highlighting Aral's career, Vallette saw a 1991 picture by the Turkish photojournalist showing some of the thousands of refugees who were fleeing to Turkey amid the Iraq war. Aral's photo was the spark that lit the light of "Exodus: Déjà Vu," said Vallette, especially when the Syrian crisis started forcing millions of people to flee their home country. "I was thinking about how we can exhibit that work, talk more about these subjects and this crisis," he said. For Aral, photojournalists witness various events throughout their careers and among these, the ones that affect them the most are those showing forced migration due to conflict. "Even if the countries, times or the forms of war change, the images of our lens are similar," he said. Societies that inform the public with the facts via photography can learn lessons from their errors, but "the rest will repeat their mistakes and pave the way for new chaos," he warned.

Aral, one of Turkey's top photojournalists, told AA that Vallette's and his aim in preparing the project was to reach a wide audience as well as to add a dimension to events by witnessing situations in different regions and periods. "For this reason, our project has turned into a project that attracts attention and is fully sustainable," Aral said. "Forced migration is not only the problem of a single society or country, but it is the problem of all humanity."

Works of 12 photojournalists on display

The first exhibit began with five photographers, and now a dozen photojournalists are showing different crises from different parts of the world, from Syria to Mexico, from Myanmar to Africa. Among the photographers taking part in the project are Roland Neveu from France, Issa Touma from Syria, Venezuelan photographer Fabiola Ferrero and Iranian photographer Yalda Moaiery as well as Turkey's Atılgan Özdil from Anadolu Agency. In 2016, Russian photographer Sergey Ponomarev, who came in first in the single-photograph category in Anadolu Agency's Istanbul Photo Awards the same year, sent Vallette his photos. A week later, Ponomarev won a Pulitzer Prize for the same photo about Syrian refugees, solidifying Vallette's motivation for the project. The project is nonprofit and voluntary. "This project is for the public, to create awareness," he added. Vallette said at the end of the day, anyone could be a refugee, citing the example of his grandfather, who had to flee Spain during the 1930s. "We do have a responsibility at the end of the day to show and talk more about this crisis, but not just about the crisis," he said. "We should talk more about the reality of millions of people." According to a U.N. Refugee Agency (UNHCR) report, 70.8 million people were forced to flee their homes last year due to wars, conflicts and persecution. "Among them are nearly 25.9 million refugees, over half of whom are under the age of 18," the report added. Turkey is the top refugee-hosting country in the world, with 3.9 million refugees. "We want to continue stronger and take the exhibition to more cities," Vallette said. "I think now, as never before, this project, even though it's just an exhibition, should be shown more because we need to talk more about the crises."
RELATED TOPICS