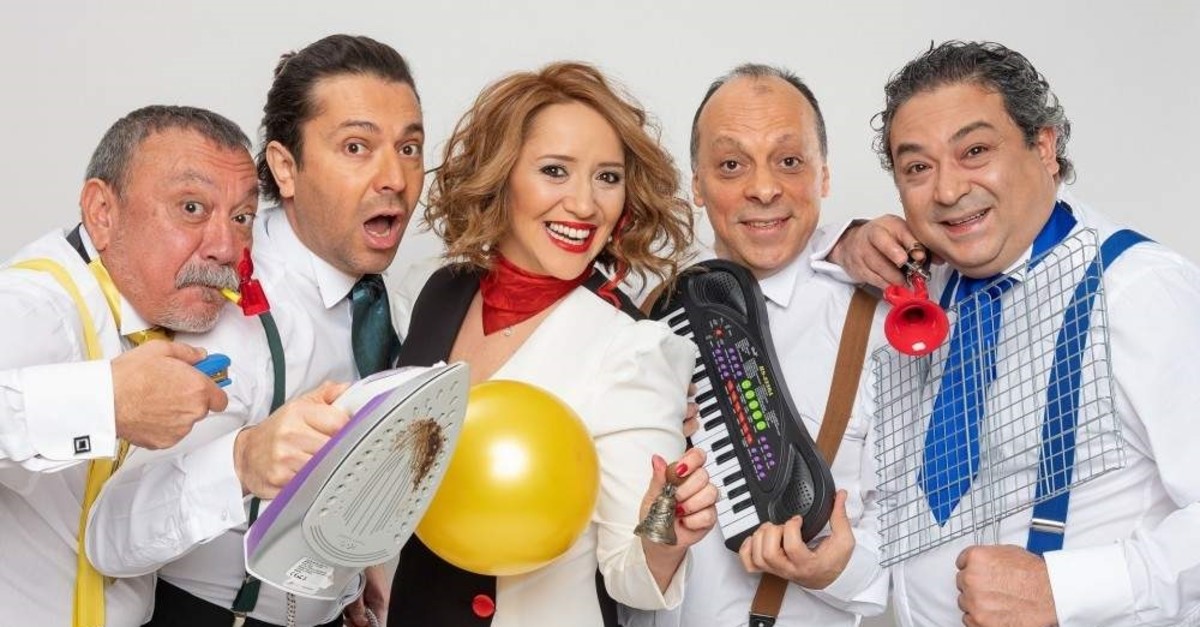 Five members of Ak'la Kara Theater bring radio drama, which was all the rage in the past, to the stage using more than 100 materials to make various sounds in their 'Radyatro' show

It has been nearly 93 years since the first announcement was heard over the radio in Turkey on May 6, 1927. Following this very first step into the world of radioelectric waves, this wireless communication device became increasingly popular among listeners.

People were putting their ear to radios to learn what was going on across the country through the latest news broadcasts. Stories, theater plays, tangos, talks, concerts and many other performances also reached the listeners through these gadgets, placed in the most important corners of houses. With the advent of television, however, radios went out of vogue.

I do not remember those good old days when radios were all the rage. Being a millennial in Generation Z means that your coming of age is marked by the Information Age, aka the computer or digital age. Therefore, we are more comfortable using digital technologies. We are the children of social media. Nevertheless, I have listened to radio dramas out of curiosity. For those who do not know, radio dramas are acoustic play performances with no visual content. Lacking any visual power, they heavily depend on music and sound effects to help listeners imagine the characters and the story.

Recently, Ak'la Kara Theater in Istanbul's Kadıköy district presented a radio drama show called "Radyatro" (combining the words radio and theater in Turkish). Five members of the theater bring the radio drama version of "Around the World in Eighty Days" by Jules Verne to the stage. This representation is not played in front of a backdrop with changing stage forms like the classical theater concept. The actors have microphones in front of them and perform about 30-40 characters in the novel by changing their voices. Each of them creates the atmosphere of the play by making different sounds with around 100 effect tools and instruments while playing the characters.

Speaking to Daily Sabah, Savaş Özdural, one of the actors at Radyatro, said that radio dramas were put on the stage before; however, these versions were just reading sessions. "The effects and music of the plays were sometimes given by an effector or tape on the stage. The biggest difference in our play is that we make our effects by ourselves. It is a first in our country and the world in this aspect," he said.

Talking about how the group came up with the idea of presenting a play combining radio and theater, Özdural explained: "As Ak'la Kara Theater, we are always trying to bring works that have not been performed for a very long time on the stage. At the beginning of the last season, while we were in search of new and different things in the world, we came across some versions of radio drama on stage. Then we began thinking about how we could carry these radio dramas to a different dimension. We decided to change its format." Özdural was the one who especially carried out research to create new versions of radio dramas on stage. After a long period, he decided to work on Verne's masterpiece and adapted it into a play suitable for Radyatro.

In the show, Özdural plays protagonist Phileas Fogg and Pelin Turancı appears as Princess Aouda. Fatih Gülnar salutes audiences as Jean Passepartout and Özdemir Çiftçioğlu is in the role of detective Fix. Fatih Özacun takes supporting roles and also plays original soundtracks that he composed for the play.

FINDING MATERIALS TO PRODUCE THE SOUNDS

Before the show, the team arranged what sounds they would make but the real problem was finding which materials they would make them with. Özdural said: "We put all the materials in the theater, big and small, on the stage. When we came across a scene, everyone was trying to make the sounds in the text out of those materials. Sometimes we found it in the first minute, sometimes we tried for hours. We got stuck with some effects near the end of the play and then we had to get support from a professional effector. We met with Ali Ören, who has been preparing effects for series and films in Turkey and abroad for many years. He certainly made it a lot easier for us with his experiences. For instance, he showed that after long efforts, we could make the sound of a seagull, which we could not do before, with a balloon or the sound of a wing by waving a closed umbrella. In addition, Ali Gökmen Altuğ, who joined the team later, did not work on the stage, but made the play into a completely different one with his contributions. He supervised the play, making some static scenes entertaining."

The show developed into a performance rich with effects thanks to a lot of creative ideas. The audience is sure to enjoy watching the group members create diverse sounds on the stage along with portraying their characters and engaging in dance routines. The older audience that remembers radio dramas will witness how those plays were formerly performed on the stage. Other audience members who have never heard of radio drama will experience a new kind of excitement. While watching the play, they will see that the team uses a wide variety of interesting materials. For example, they make the tram sound from a sewing machine used by our mothers, the effect of rain with rice and bulgur, and the sound of galloping horses with their own bodies.

The team will present the Radyatro show on Jan. 18 and 19. Tickets can be purchased from Biletix.

Furthermore, the team hopes to take its performance of the play beyond Istanbul on a tour across Turkey. Implying a Turkey tour would be possible for them with sponsorship, Özdural added that they will perform "Then There Were None" by Agatha Christie in the southwestern town of Bodrum in February and the southern city of Mersin in March, inviting all to attend.