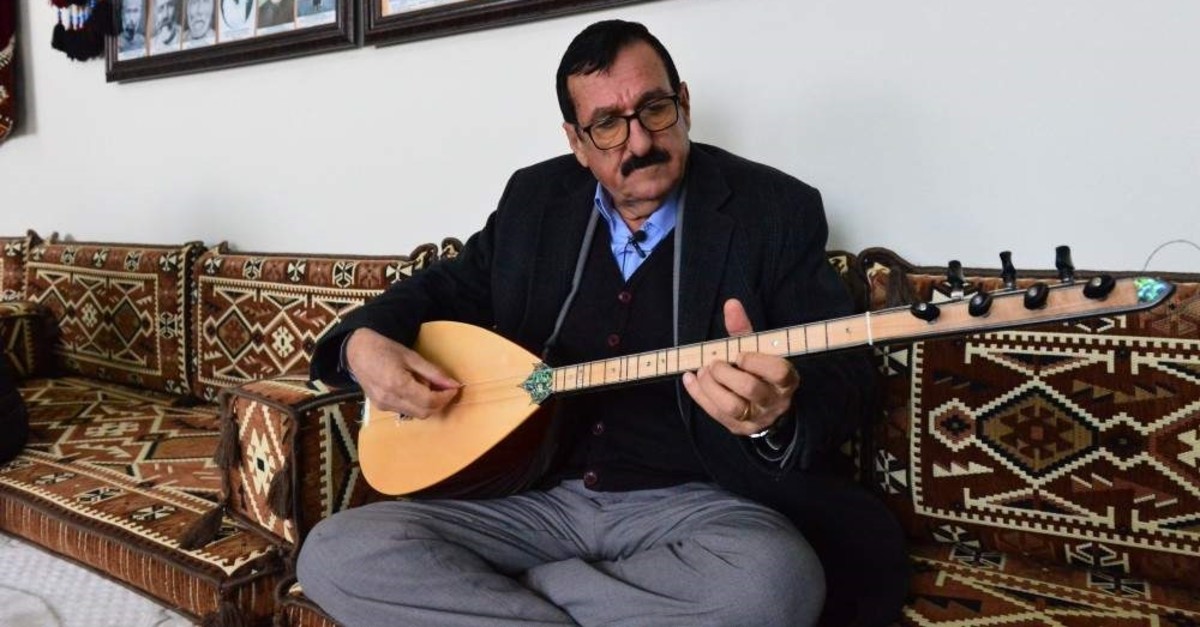 Veli Aykut and Mehmet Acet, who were named Living Human Treasures by UNESCO, sustain the tradition of minstrelsy by teaching their art to younger generations

The minstrelsy tradition keeps alive the memories of Anatolia as an important expression of cultural diversity and richness. It is a multifaceted art that includes poetic, musical and narrative expressions filtered and shaped by centuries of experience.

Veli Aykut, nicknamed Dertli Divani, is a folk poet and bard who sustains the minstrelsy tradition by sharing his knowledge with young people through speeches he delivers throughout Turkey and Europe.

The 58-year-old poet learned how to play the bağlama – a Turkish long-necked string instrument – when he was young. Aykut wrote his own poems and composed music from the poems of other folk poets. Aykut has released 12 albums, including six solo albums, and many of his works have been performed by other artists, including Zülfü Livaneli, Arif Sağ, Belkıs Akkale and Sabahat Akkiraz.

Thanks to his works in the fields of folk literature and zakirlik – which involves playing a string instrument and telling folk poems in Alevi houses of worship, known as cemevis – Aykut was recorded in the Living Human Treasures Turkey National Inventory prepared by the Directorate General of Research and Education of the Ministry of Culture and Tourism in 2019 under the scope of UNESCO's "Intangible Cultural Heritage Convention."

Aykut organizes events called "Mekteb-i İrfan Muhabbetleri" ("School of Knowledge Talks") in many parts of Turkey and Europe to transfer his knowledge in these fields to young people. In an interview with Anadolu Agency (AA), Aykut said that the award he received belongs not only to himself but also to all folk poets, from Pir Sultan and Daimi to Aşık Veysel and Mahzuni.

Remarking that the award placed a heavy burden of responsibility on his shoulders, Aykut said: "I thought I needed to do something to share my knowledge with young people who are interested and curious. Initially, we met with 23 or 24 young people in the capital Ankara every 15 days and started to have conversations and sing folk poems. We all know that this tradition is carried on through the master-apprentice relationship. We have worked in this direction thinking that these folk poems should not be played and sung alone but also should be interpreted."

Noting that they began organizing events called "Mekteb-i İrfan Muhabbetleri" upon request, Aykut said that they have held 69 events within this scope in many parts of Turkey and Europe. "We have tried to share our experience with our young people, who have bright futures," he said.

"In these conversations, we have tried to transfer our experiences to about 500 young people. In these conversations, we both learn and teach," he continued. Underlining that the folk poems of great bards, folk poets, wise men and sages are in fact the heritage of all mankind, Aykut noted: "It is for the benefit of humanity to give music to what these values tell and what messages they convey to humanity, in company with our string instrument saz, to spread and share them to as wide an area as possible with the works we call folk poems or breath. This is because the young people who play saz, sing folk songs and folk poems and whirl, actually transforming themselves into purified, clean people full of love. Just as water purifies our body from dirt and odor, conversation and cultural values purify our souls and transform us into beautiful people. Our main goal is to spread these conversations to as broad an audience and area as possible. If we can make a contribution like a drop in the sea to beautify both our environment and our world, we are lucky," Aykut said.

Dudu Burhan, one of the participants of the "Mekteb-i İrfan Muhabbetleri," said that he both obtains information at the events and also plays the saz for the zakirlik tradition. Burhan noted that conversations help him interpret the meanings of the folk poems he plays and sings, adding: "It makes me very happy to listen and learn the interpretations of the folk poems sung, and it brings me to maturity. So, like all my fellows, I want to improve myself more on the bağlama and saz."

Hasan Çelebi, another participant, said that the "Mekteb-i İrfan Muhabbetleri" have allowed him to refresh his knowledge. Pointing out that he has had the opportunity to learn more folk poems thanks to these conversations, Çelebi noted: "I can sustain the tradition of zakirlik by playing the saz better. I am trying to maintain this mission in the best way I can right now."

Mehmet Acet is another folk poet and bard who teaches young people the tricks of the trade of minstrelsy, which he has practiced for nearly half a century, like Dertli Divani.

The 66-year-old folk poet, nicknamed Aşık Sefai, told AA that the relationship between master and apprentice is highlighted in the Alevi-Bektashi culture, adding that he has been learning to play the bağlama and carry on the tradition of zakirlik since his childhood in the Kısas neighborhood of Şanlıurfa province, where he was born and raised.

Noting that he has received numerous awards at the events he has attended at home and abroad for years, Acet stated that he retired from the Şanlıurfa State Turkish Folk Music Choir two years ago.

Due to his works in zakirlik and minstrelsy, Acet was recorded in the Living Human Treasures Turkey National Inventory in 2015. He also said that Neşat Ertaş, known as "The Plectrum of the Steppe," and Şeref Taşlıova, a folk poet, received a similar award.

Acet explained that he has a special room in his house featuring his prizes, certificates and saz instruments, saying that he teaches the tradition of minstrelsy to young people who are enthusiastic about the bağlama.

Stressing that, as a folk poet, wealth is his saz and capital is his voice, Acet continued: "I do not have another source of income; I live on my pension. I have transferred and am transferring this culture to my children, my apprentices and the young people of my village. This mission is ongoing. This task is a treasure for those who buy it and appreciate its value. We sell it, but you cannot sell it unless you have a customer. We are grateful that this has many customers. Dozens of young people play and sing in our neighborhood. Currently, I am training two young people, including my own son. They have certificates and ID cards from the Ministry of Culture and Tourism. They are my apprentices; I am proud of them."

Acet said that he sometimes performs with his son Haydar, whom he trains, and that they win the acclaim of the audience.

Son of a living treasure

Haydar Acet, Mehmet Acet's son, said that he is proud of his father and his life has been interwoven with the bağlama since his childhood. "As much as I have seen from my father, I am trying to keep this tradition going as far as I can. I have grown up close to the bağlama since I was a kid. I am 35 years old and I have an inclination toward this as I have constantly seen and heard it. It is really flattering to be the son of a treasure. I think it is a gain as far as it goes and as far as we can learn."

İbrahim Demirkol, one of Mehmet Acet's fellow villagers, said that he has been playing saz since his childhood. "Every apprentice will surely find his master. I am receiving training from Aşık Sefai. I grew up with a master. We received the Ministry of Culture's registered zakirlik certificate as a result of these trainings. I still sustain the zakirlik tradition at cems (Alevi communal worship services)," Demirkol said.

Tradition of placing needles between lips

The tradition of "dudakdeğmez" – which is used to make the call-and-response duet in the tradition of minstrelsy more difficult by putting needles between the lips and serves as a mark of mastery for minstrels – has been carried out for centuries in some Turkish cities, such as eastern Erzurum. In Erzurum, where famous folk poets such as Emrah, Sümmani, Reyhani, Mevlüt Ihsani, Mustafa Ruhani and Nihani were raised, the tradition of minstrelsy is still alive. The folk poets who pass on the main subjects of folk culture – most notably death, love, longing and divine love – from generation to generation with their instruments and couplets have for centuries developed difficult tests for those seeking to pursue and maintain the ancient tradition of minstrelsy. Folk poets practice "dudakdeğmez," also known as "lebdeğmez," to gain acceptance as minstrels.

The traditional call-and-response duet method, often used by folk poets to attract public attention due to its difficulty, is practiced by placing needles between the two lips.

Folk poets try to form sentences in a way that does not break the tradition, rhyme and depth of meaning, while keeping the needles between their lips and avoiding the use of the letters v, b, m, p and f in the alphabet.

With this tradition, which is now carried out using toothpicks because of the damage needles cause to the lips, words are given a new connotation, the language is enriched and minstrels are provided with a rich cultural heritage.

Master minstrels perform "dudakdeğmez" at the Kıyasettin Temelli Coffeehouse, supported by Erzurum Metropolitan Municipality, in the city's Yoncalık neighborhood in the Aziziye district.

Rahim Sağlam, a folk poet, told AA that it is very hard to apply this method, noting that minstrels fail the test if they use the letters that they should not during the call-and-response duet.

Sağlam said famous minstrels such Sümmani, Reyhani and Çobanoğulları have kept the tradition alive. "This tradition has continued to us from the folk poets we have upheld as examples and will surely continue after us," he said. "In the tradition of minstrelsy, there are the methods of divan, lampoonery, epic and praise as well as 'dudakdeğmez.' These methods are also very difficult and our methods will always continue. We have traditions in our art that have lasted for years. The ones who cannot perform 'dudakdeğmez' and the other (methods) are not yet minstrels but are preparing to be. If anyone can apply these methods, they are minstrels."

İhsan Yavuzer, another minstrel, said that he has developed his skill in this method to attract the attention of the public.