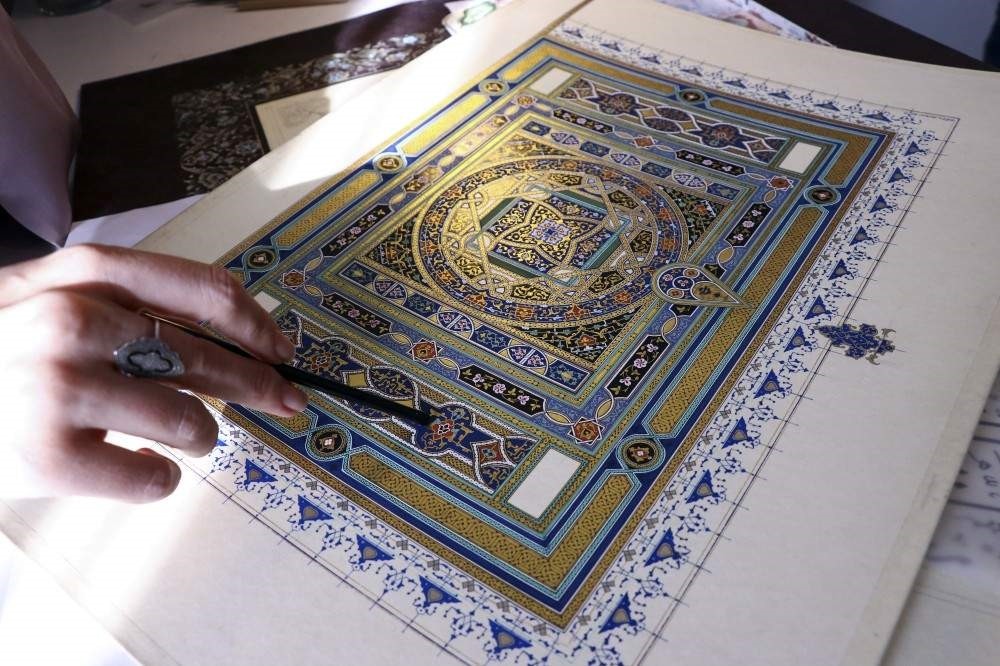 Iranian ornamentation artist mirrors the harmony between Iranian and Ottoman patterns in her masterpieces in Ankara. Zahra Masoumi shares her thoughts on the past and present of ornamentation and handcrafting

Zahra Masoumi, 33, who conducts craftsmanship courses in the capital Ankara, started her adventure in the world of ornamentation over 12 years ago in Iran's capital Tehran. Due to her enthusiasm for handcrafting, Masoumi studied miniature illustration which boosted her interest in arts.

After two years of study, she proceeded to specialize in Islamic art in Iran, where she focused on the art of ornamentation and illumination. Masoumi then decided to further deepen her knowledge and skills in this area and moved to Ankara to get her master's degree in art history in 2013.

"Ornamentation usually goes in line with calligraphy. It is not considered separate because these two arts complement each other," she said, referring to the practice of illuminated manuscript – the decoration of manuscripts with patterns, miniatures and other marginalia. Calligraphy came to the forefront first due to a need for handwriting the Holy Quran, she added. "Quran, as the word of Allah, was originally spread through word of mouth, passing from one person to another, but then there was a need to write it down to pass it on to other generations. This paved the way for ornamentation art."

The Iranian artist noted that with the support of rulers and sultans, some Quran copies were produced in Muslim countries, which laid the groundwork for enriching the art of ornamentation and illumination. "While it first appeared with very simple ornaments and colors, the art later, during the 13th century, turned into rich workmanship." She stressed that ornamentation art not only spread in the territories of Persia or the Ottoman Empire but was also popular in other Muslim countries as well, including Egypt and Spain. 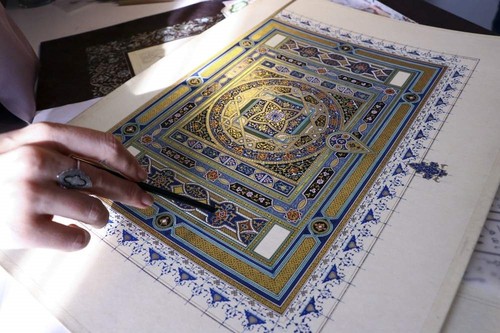 Noting that every country has its own style of illustration, Masoumi said professional ornamentation artists can clearly differentiate the works based on various patterns used at different time periods and their country of origin. "After moving to Turkey, I tried to combine the Ottoman ornamentation patterns with the Persian motives that I was familiar with. I am not following the Ottoman or Iranian style alone. I try as much as possible to get these two styles closer to each other and move forward."

The artist said she probably would not be able to move forward if she restricted herself to the style prevalent in her home country, adding that coming to Turkey, meeting with craft masters, analyzing their works, attending exhibitions and competitions, as well as exchanging ideas and professional comments by academics all had a positive influence on her skills.

"Due to availability of resources, Turkey produces more art," she added.

"I am working on classical ornamentation style, and I can say this is the main feature of my art," Masoumi said, highlighting that she avoids using modern style on purpose. The artist underlined that she thinks abandoning the classical style may harm the nature of art. "In my opinion, the more classical this art is, the more it can show itself and the easier it is to get closer to its essence." But the artist said the materials she uses are advancing with technology, further supporting the craftsmanship and aiding the artists to create even more beautiful and aesthetic art.

Masoumi said that her most time-consuming work took seven months to finish. "Art is something that touches the soul of people," the artist said, noting that this also happens when people spend hours looking and analyzing ornament illustrations.

Main historical periods of the ornamentation arts are: the Ottoman Empire in current Turkey and the Safavid period in Persia, she said. Stressing that the craftsmen of the period from both empires used to exchange their experiences and influenced each other while working in palaces, Masoumi said even the patterns are quite similar with differences only in details. "Since Turkey and Iran are close to each other in terms of the language, it helped the countries in reaching common grounds fast in many fields including arts. However, there are still differences between the two cults."

Recalling that she has attended many competitions in her field and even held an exhibition of her works back in Iran, Masoumi said she is planning to have her first Turkish exhibition in June in Istanbul, where she intends to display classical style art.

The courses of ornamentation and miniature works, which she has been conducting for over four years, as well as the sale of her works in various fairs, drawing of ornaments for private customers are the main sources of her income.

Masoumi said Hatai and Rumi motifs are the main constituent patterns that form the ornamentation arts. "The environmental excerpts such as nature, flowers and plants take an important place in patterns," she added.

While Hatai motifs reflect mostly nature, flowers and leaves, it is seen that Rumi motifs are mostly stylized animal patterns, the artist said. She noted that the ornamentation patterns come out when these two motifs merge together. "By staying far from them, we are moving away from its nature, which means we are moving away from the essence of art."

The Iranian artist said live observation of the masterpieces strongly influences people of art. "Normally we only see the picture from afar, but coming and seeing the work with naked eye strengthens our imagination. It feels like we are living the history," Masoumi said.

It takes at least one and a half years of non-stop training to learn the basics of the ornamentation arts for a newcomer, Masoumi said, adding that the art doesn't end with drawing the patterns only but also requires theoretical knowledge and background. "Students also need to see a lot of antique works, need to analyze books in libraries," she said.

The artist hailed Turkey, especially Istanbul, for hosting diverse cultures and personalities from various crafting schools, whereas the country motivates the craftsmen with historical calligraphy, literature and architecture. "Calligraphy didn't remain on paper only: It had also been used on buildings, structures and mosques, and the environment was very conducive for that."

Masoumi went on to say that her dream is to convey er knowledge to students who are curious to learn the art of ornamentation and miniature painting. "I want this art to be kept alive," she said, adding that she desires to add new things into patterns.