Sculpture, painting exhibits examine the link between past and present 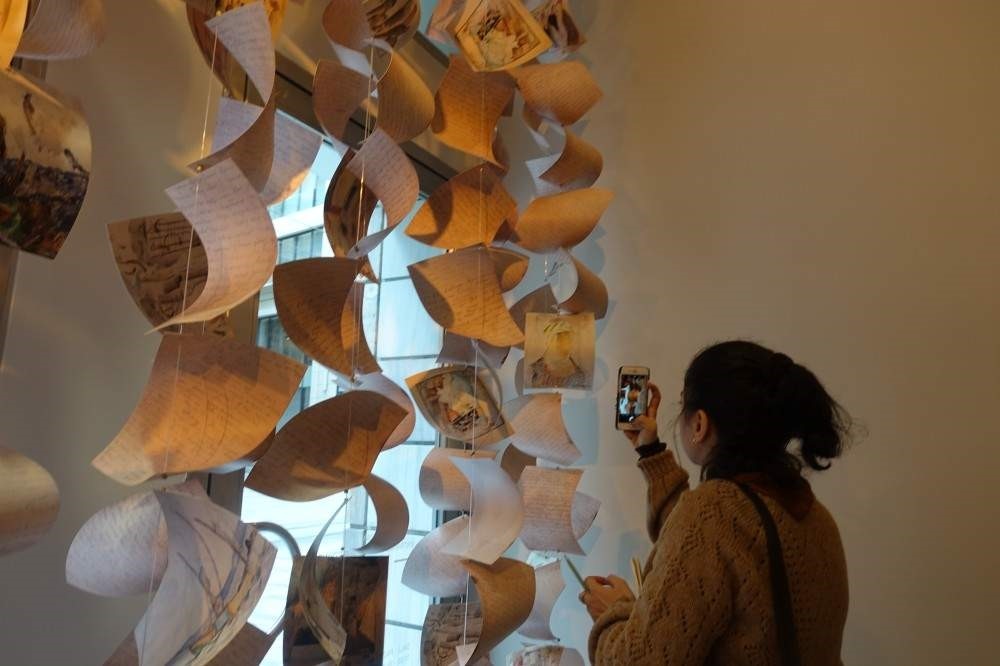 The Beyoğlu district is a treasure trove for discovering the city's historic charm, with two intriguing exhibits now available to check out at its Anna Laudel and Meşher galleries.

Istanbul's Beyoğlu district is a historical place hosting a number of interesting performance venues and cultural spaces. Of the many places to visit in this bustling area, formerly known as Pera, stand two renowned galleries, Anna Laudel and Meşher, whose fascinating exhibitions await visitors with open arms.

The Anna Laudel Gallery, in the Karaköy neighborhood of the district, is dedicated to providing a platform for contemporary art in the city. Its latest exhibition is "Earthly Realm," showing work by acclaimed sculptor Bilal Hakan Karakaya. The show, which goes on display from Jan. 30 until March 8, features the artist's unique creations molded of various techniques and pushing the boundaries of traditional sculpture.

Karakaya is famed for his multi-material approach, which combines everything from resin to industrial and natural waste, sketchings and more. His works reflect the reality of individuals trapped in the chaos of modern urban life. The artist reinterprets the complex structure of daily life with a symbolic approach. While his figures reflect the "alienation" of the oppressed human living under the weight of the capitalist world, his sculptures are fed from the reality of life and establish a relationship between past and present. 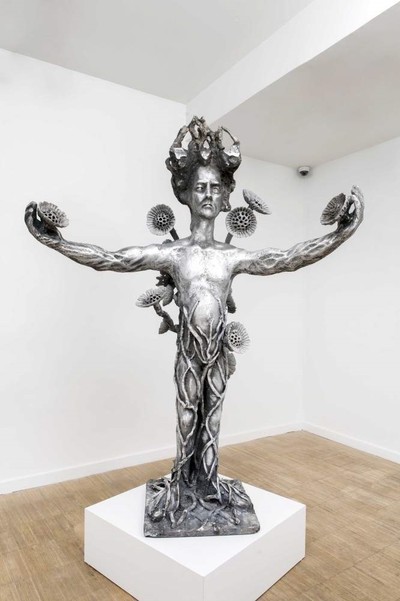 The relationship that Karakaya has with his materials is the key feature that defines his art practice. The artist refuses to use any kind of protective tools such as gloves, as he finds they go against the nature of the art of sculpture. He prefers instead to be in direct contact with the materials over the whole course of the production process to avoid creating a distance between himself and his work.

From gallery to stage

There is a general tendency for Karakaya's artworks to rise. This upward trend can also be observed intensely in the works presented in "Earthly Realm," shown across three floors of the Anna Laudel.

With a different story on each floor, the show opens to the audience's experience of hell, purgatory and paradise, in an overarching narrative akin to Dante's "Divine Comedy." Karakaya reverses the usual static structure of sculpture and turns it upside down. In this way, the structures that need to be thinned as they rise are gradually thickened and enlarged. 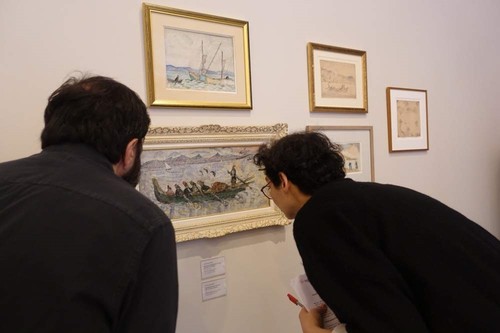 The artist offers a unique perspective contrasting the concepts of life and death and space and time across the floors of the exhibition. The contradiction between each layer of the exhibit can also be seen in works spread across the same floor. While the first floor reveals the horrifying side of death, the "Vaccine" series on the third floor gives life to disease and death. Drawings and reading desks also feature alongside.

On the second floor, visitors are greeted by works referring to ancient texts and myths. Among them include the sculpture of the Egyptian God Osiris and Adam and Eve. In the sculpture of Osiris – the god of agriculture, fertility and death – Karakaya recreates the story of this god, who finds himself in a coffin in the middle of the Nile River as a result of the betrayal of his brother by adding flowers to his work.

"The Adam and Eve" installation, which is exhibited in the darkroom inside the gallery space, represents the process of witnessing the story of creation. But unlike the known depictions of the iconology of "Adam and Eve," Karakaya exhibits them as rotten bodies in a coffin. This carefully curated selection reflects Karakaya's narrative behind his art production, transforms the gallery space into a stage, inviting the visitors to participate on a journey and become a part of the game through the themes of the concept of time, death, eternity and life.

Meanwhile, in the Meşher gallery on Tomtom Street, Ukrainian artist Alexis Gritchenko's works from the year's 1919-1921 go on display as part of the exhibition "Alexis Gritchenko – The Constantinople Years," which opened on Feb. 7 and is on exhibit until May 10. Ebru Esra Satıcı, one of the curators of the exhibition, said that the gallery had selected a number of interesting and less-known artists to focus on. Satıcı noted that they expect the new exhibition to attract at least as much attention as the first one, saying that only works of the artist related to Istanbul are included in the exhibition.

According to Satıcı, the works feature the "dynamocolour" technique developed by Gritchenko himself and are vivid in color, with more than a dash of cubist influence. The collection also includes a self-portrait produced by the artist using the same technique in France in 1923.

Asked about Gritchenko's works on the Hagia Sophia, Satıcı answered that: "The Hagia Sophia was really a passion for Gritchenko. He went there almost every two days, if not every day. He did not hesitate to walk there, even under very difficult circumstances. He talked about the muddy roads of Istanbul and the cold and bad conditions. The Hagia Sophia was like a childhood dream for him. We understand that he grew up in a culture that was very devoted to Byzantine history and art. He had a lot of knowledge and interest in Hagia Sophia before he came to Istanbul."

Şeyda Çetin, another curator of the exhibition, stated that Gritchenko's works in Istanbul, where he came in 1919 and lived for two years, had never been exhibited there until now, adding: "While living in a transition period here, he also made friends with Turkish painters, including Hamdi İsmail and İbrahim Çallı. He made friends with a group that we could refer to as Turkey's intellectual crowd. He painted every day in Istanbul. He had great admiration for Istanbul. He also had the opportunity to sell these paintings, mainly watercolors."

Explaining that Gritchenko left Istanbul in 1921, Çetin continued: "From here, he went to France. However, Istanbul was so much in his heart that he turned his memories here into a book. As can be seen during the exhibition period, we accepted this memoir book as a path, as we read from the book what he experienced here every day. This memoir was published in Turkish by Yapı Kredi publications in line with the exhibition." 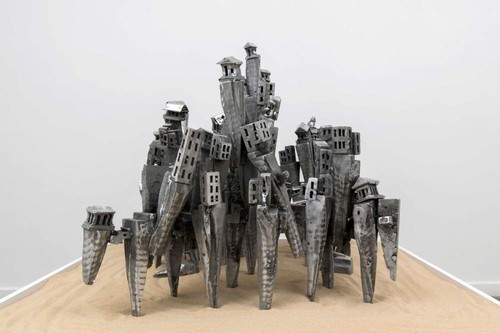 Çetin said the memoir provided an interesting glimpse into the character of the artist: "He was a very witty person. He was always positive despite living in poverty and in very difficult circumstances." The painter, who died at the ripe old age of 97, lived much of his time in Istanbul as a refugee. Says Çetin: "We are actually reading a refugee story in the book. Despite this, he clung to life with his paintings. We can look at his works, which he painted with a constant wit, for a more interesting perspective."

Çetin pointed out that many of the 100 works on display had been borrowed from museums in seven countries, including the National Art Museum of Ukraine, Ukrainian Museum New York, Centre Pompidou and College de France, as well as private collections.

One book in Atatürk's library

A copy of Gritchenko's memoir "Deux Ans à Constantinople" ("Two Years in Istanbul") found in the library of Mustafa Kemal Atatürk is also among the works displayed in the exhibition.

A hundred years after his visit to Istanbul, a selection of gouache, charcoal and oil paintings, as well as a plethora of watercolors, have been exhibited for the first time. With his distinctive style and color palette in works ranging from the Hagia Sophia to the fortifications of Istanbul, from the Golden Horn to Galata and even Büyükada, the exhibition offers a unique glimpse of Istanbul from a unique perspective. The works can be seen until May 10.
RELATED TOPICS