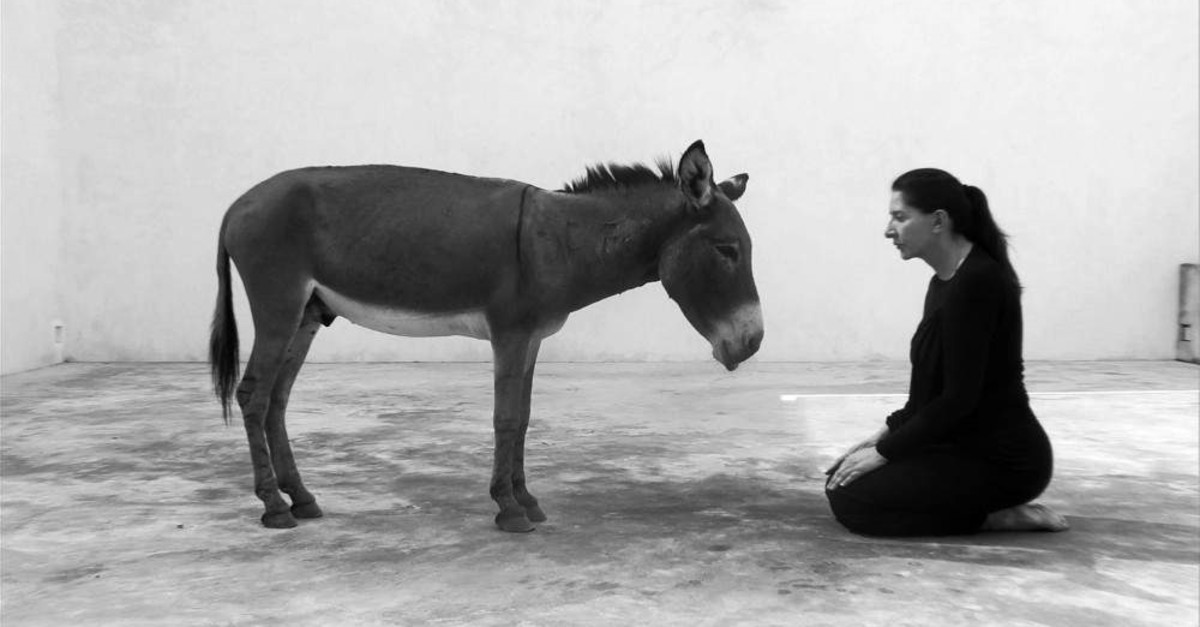 Comprising of a chronological presentation by Serbian artist Marina Abramovic, 'Flux' exhibit at the Sakıp Sabancı Museum is the largest project dedicated to the art of performance in the history of Turkey

Sabancı University's Sakıp Sabancı Museum (SSM) and Akbank Art in Istanbul is hosting the first exhibition of world-renowned performing artist Marina Abramovic and the Marina Abramovic Institute (MAI), of which she is the founder, in Turkey.

The exhibition titled "Flux," scheduled from Jan. 31 to April 26, aims to make the history of performing art in Turkey accessible and understandable to visitors. The exhibition includes a comprehensive retrospective of the documentations of Abramovic's performance; live performances of the artists who have responded to the open call and who have been invited to the project in cooperation with MAI; a section called the Abramovic Method where the artist's exercises for the public can be experienced; as well as a documentary screening and video gallery which Akbank Sanat will host.

"Flux" targets to provide an enjoyable experience to those who love the performing arts in Turkey, which is a form of art that has gained popularity since the 1970s and which is performed in a multidisciplinary way today as an object-free, temporary and instantaneous social process. The exhibition is spread on three floors in the SSM galleries. On the first floor, the exhibition sheds light on the artist's groundbreaking career through the video and photo documentation of performances by Abramovic for nearly 50 years. The section, prepared by French curator Serge Le Borgne with the artist herself, presents her iconic works, which push the limits of the mind and the body, including "Rhythm 0," "Rhythm 10" and "The Artist is Present." These are presented with her early paintings.

"Shoes for Departure," one of the energy-oriented objects and artifacts that Abramovic produced using semiprecious stones, is exhibited in association with İzzet Ziya's work titled "The Girl on the Beach," which is included in the Sakıp Sabancı Museum Painting Collection. This retrospective section of the exhibition provides a comprehensive overview of the past and present of performing arts, based on Abramovic's career.

In the performing section of the exhibition, there are 15 live performances by 16 artists from Turkey and four from abroad who were invited. Accordingly, the performances of the artists from Turkey – Arda Cabaoğlu, Bahar Temiz, Dilek Champs, Evren Kutlay, Halil Atasever, İlyas Odman, Merve Vural, Metehan Kayan and Umut Sevgül, Murat Adash, Murat Ali Cengiz and Şebnem Dönmez – and foreign artists who have been invited to the project – Maria Stamenkovic Herranz, Nancy Stamatopoulou, Nezaket Ekici and Virginia Mastrogiannaki – can be watched by the visitors at the Sakıp Sabancı Museum galleries eight hours a day, every day the museum is open to visitors.

While most of the performances are held at Gallery 2, a mobile one among them will meet the visitors at different points of the museum. Another one will welcome visitors at the gallery entrance. Curated by Brazilian Paula Garcia, who is a performing artist as well, the artists in this section came together with an open call and a special invitation by MAI in August 2019. These artists developed their performing projects in cooperation with MAI. They went through a one-week seclusion process outside of Istanbul with the MAI team before the exhibition and prepared for their performances both physically and mentally.

The third floor of the exhibition at SSM is devoted to the Abramovic Method, which she developed for artists and presented to everyone afterward, enriched by her research and travels during her teaching career. In the "Method" section, where visitors participate in person through different philosophies and techniques. Visitors will be invited to embark on a journey of discovery in order to be present in time and space through experiences focusing on movement, inactivity and concentration.

"Flux" can be seen at SSM from noon to 8 p.m. with the exception of Monday and at Akbank Sanat from 10:30 p.m. to 7:30 p.m. from Tuesday to Saturday. Visitors who would like to see all of the different performances that will be spread throughout the exhibition to the Sakıp Sabancı Museum's galleries will be able to visit the exhibition as many times as they wish with different ticket categories covering the month or the duration of the exhibition and thus will be able to watch all the performances.

As part of the exhibition "Flux," a number of documentary exhibitions and documentary screenings are taking place at Akbank Sanat. The works of Abramovic along with many other performing artists and artists from different disciplines have been arranged in a historical and thematic context during screenings which allow the discovery of the heritage that has shaped the present day of the performing arts starting from its past. The documentary-based exhibitions aim to introduce performing art in wholeness to visitors unfamiliar with this discipline.

A series of documentation exhibitions based on the themes of energy, memory, borders and private/public, offered by MAI, are aimed at creating an insight into performing arts and providing another context to the Abramovic exhibition at the Sakıp Sabancı Museum and to the performances by artists from Turkey and the international arena. These documentation exhibitions, which are organized under four separate themes, will take place from Jan. 31 to April 25.

The exhibition "Energy" is held from Jan. 31 to Feb. 22. It will include works by different artists overcoming the energy exchange that takes place within a performance. The subject energy presence is central to performance. The exhibition "Memory" is scheduled from Feb. 25 to March 14. The theme of memory is about presenting personal experiences through performance and providing access to those experiences. The exhibition "Borders" will be held from March 17 to April 4. In the "Borders" series, artists display performances where they test boundaries and pain on their bodies. The exhibition "Private / Public" will take place from April 7 to April 25. It will focus on inner and outer spaces and the relationship of the body with the society.

Film screenings at Akbank Sanat, which constitute a part of the "Flux" project, takes place at Akbank Sanat's Multi-Purpose Hall. It further deepens our understanding of Abramovic and MAI's work through documentaries, videos and interview recordings in the archives. Below are some of these films. You can visit Akbank's website to find out all the films.

"The Artist is Present," directed by Matthew Akers, will be screened on March 7 at 2:30 p.m.

With her seductive, fearless and transcendent persona, Abramovic has redefined art for nearly 40 years. Using her own body as a tool, pushing herself beyond the extremes of her borders, even jeopardizing her life sometimes, she produces performances that challenge and shock us and emotionally affect us.

On the occasion of a visit by the Dalai Lama to Frankfurt in 1982, Abramovic and Scheffer filmed this documentary about the Dalai Lama's message of peace. The film combines a visit to the Lama Tsong Khapa Institute in Pomaia, a small settlement in Italy, chapters from Dalai Lama's public speech in Frankfurt, and footage from his meeting with an elderly person from the dignitaries of the Hopi people.

"Marina Abramovic's Archival Interviews" will take place at 2:30 p.m. on Feb. 5; on Feb. 11 and March 10/31; at 2:30 p.m. on March 28; and at 2:30 p.m. on April 10. This extraordinary compilation of archival interviews, dating from 1987 to 2009, documents the artist in her televised interviews, lectures and exhibitions, speaking on artistic practice, the role of the artist and social issues.

This landmark event has brought leading spokespeople from different areas to talk about current global paradigms and proposals for a more robust future.