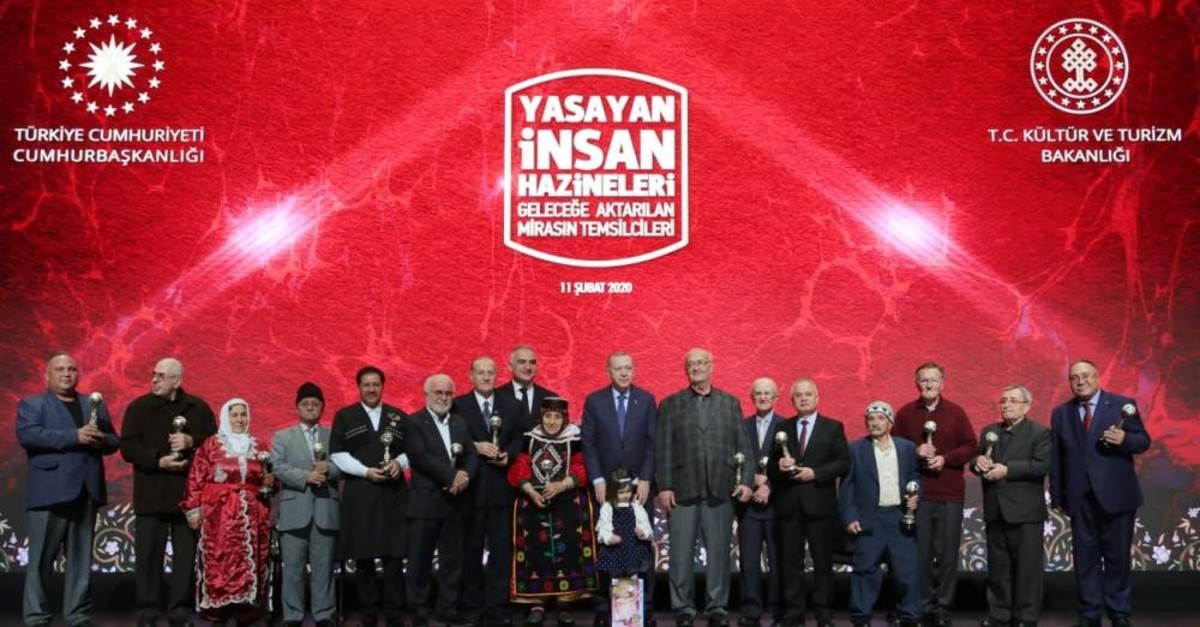 Since 2008, Turkey has been compiling a national inventory of Living Human Treasures as part of UNESCO's Convention for the Safeguarding of the Intangible Cultural Heritage treaty.

The treaty requires evaluations to be made in line with a particular set of criteria with the aim of recognizing masters of various art forms and cultural practices each year. The award ceremony this year was organized at the Beştepe National Congress and Culture Center of the Presidential Complex.

Speaking at the ceremony, the president said: "The artists deemed worthy of this award deserve all our thanks for the works they have created by devoting their entire lives and unique values to our country and the world. Our civilization is a civilization of love. Love is the dough of these lands. Anatolia is a land of lovers as much as it is a land of martyrs, veterans and brave people. It is a homeland for skilled people who love every item they create. All the states established in this land, from the Seljuks to the Ottoman Empire, rose with love. The ink of calligraphers and the hammers of master craftsmen have forged masterpieces of love here for over 1,000 years. If there was no love in our hearts, dozens of traditional arts would not have survived to this day. Words fail to suffice in order to appreciate these artisans, whose hands are filled with such a huge amount of love and unique talent. Today, our fertile lands have drawn all eyes thanks to these precious gems."

Erdoğan noted how much Turkey was cut off from its authentic culture, art and literature in the era immediately following the foundation of the republic, adding: "The approach to our cultural life during the single-party years derided our long-held values as old fashion and tried every means of effacing them from these lands. This cultural fascism, which sees the values of the nation as signs of backwardness, struck the biggest blow to Turkey's cultural and artistic life. However, we have gained a brand new country that gives importance to our cultural heritage and has avoided discriminating against artists for 17 years."

"On UNESCO's Intangible Cultural Lists, we represent one of the top five countries with the highest number of cultural values out of 178 nations, with 18 cultural values on this list. Just recalling some of the names on that list is enough to show the extent of our wealth. On this occasion, we honor artists of whom we have recently lost, paying our respects and praying for mercy upon them. We wish the best of health to the master craftsmen who honor us with their existence. I would like to thank our chief artisans, whom we regard as the safeguards of our civilization. Our precious human treasures are the flags of our national culture and representatives of the master-apprentice tradition."

Stating that Turkey had countless skilled people to sustain its age-old heritage in traditional arts across the country, Erdoğan continued to add that traditional arts, as with everything else, had been impacted by technology. "Our craftsmen face certain difficulties in finding apprentices to sustain their arts. Every art that is forgotten or cannot be sustained represents a loss in our national memory. We are so sensitive in this aspect and support projects to assist our artisans run by the Ministry of Culture and Tourism, along with various charities and municipalities. Nevertheless, our efforts are not enough. Therefore, our young people bear the responsibility to embrace these arts and nurture them."