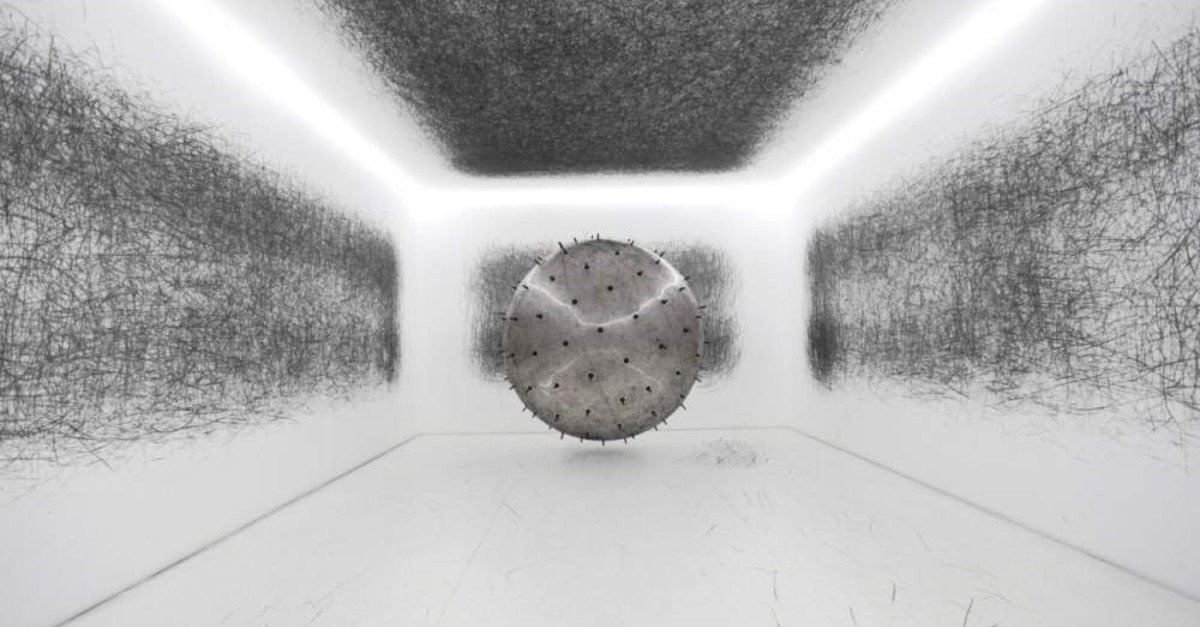 Odunpazarı Modern Museum (OMM) in northwestern Eskişehir province is preparing to host an interactive kinetic sculpture called "ADA" by Karina Smigla-Bobinski, who is known for interactive installations. At the opening of the exhibition, on Feb. 15, 2020, which will take place with the participation of artist Karina Smigla-Bobinski, "ADA" will come alive for art enthusiasts.

"ADA" will be exhibited in OMM for the first time in Turkey and will leave its mark on the museum with the performance of dancer Li Kehua. The work is reminiscent of a post-industrial creature from the world of nanobiotechnology that is self-forming, has a soul and is waiting to be activated by its visitors. The kinetic sculpture is an interactive "art-making" machine consisting of a transparent, dice-like sphere filled with helium. Charcoal bars soaked on the sphere that roam free in the room, leaving traces on walls, ceiling and floor. This sphere, activated by the visitors, has living energy. Matching with OMM's mission to carry out projects that bring technology and art together, the new exhibition "ADA" can be visited until April 12, 2020.

From first computer prototype to 'ADA'

Karina Smigla-Bobinski's "ADA" takes its name from Ada Lovelace, who is recognized as one of the world's first computer programmers. Ada Lovelace, who developed the first computer prototype with Charles Babbage in the 19th century, formed a common life in which she combined mathematics with the romantic legacy of her father, Lord Byron. This ideology of Lovelace, who intended to build a machine that could produce works of art such as poetry, music, and painting like an artist, has been carried on to the present day by Karina Smigla-Bobinski's "ADA." A complex structure emerges as the white walls of the exhibition area begin to fill with drawings and signs formed by black coals attached to this sphere. Although the visitor tries to control "ADA", the form of the composition is incalculable. This visually experienced movement is similar to the output of a standard command given by a computer.

"ADA," described by critic Arnd Wesemann as "a vivacious performance machine," is also directly related to modern-day debates about biotechnology. This interactive kinetic sculpture leaves traces that the artist and visitor cannot decipher. These complex drawings created by this human-made work can only be deciphered with connotations. The deciphering of the symbolic language of "ADA" during its display will be left to the participants through the "coding" system that we are accustomed to from human communication. Reminiscent of Swiss sculptor Tinguely's Méta-Matic sculptures by its self-realization, "ADA" differs from it by being the artist-sculptor with creative acts.

Just as Lovelace's poetic dreams for computers extend beyond standard commands, Smigla-Bobinski's "ADA" exposes the hidden and creative capabilities of machines. The sculpture leaves itself to the interpretation of OMM visitors with all these features. The ticket fee for "ADA" is TL 10 in addition to the museum ticket for all the visitors. Visitors aged 12 and under will be able to visit the exhibition for free.