Turkish artist to introduce Istanbul to world through mosaics 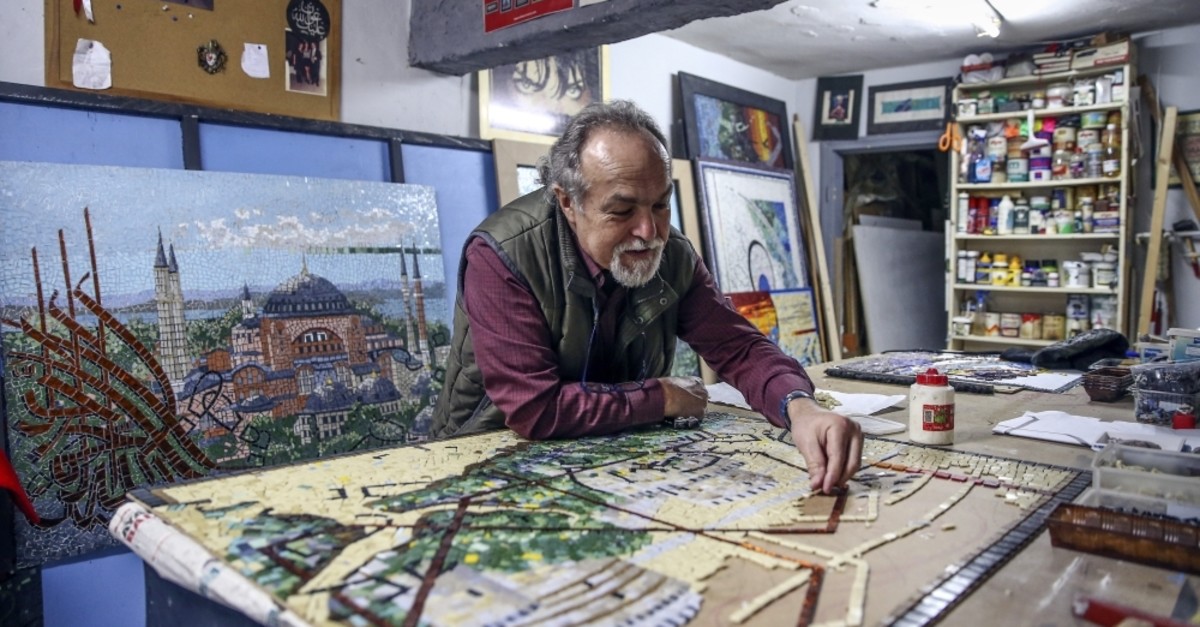 Süha Semerci, a mosaic artist noted for his works featuring Istanbul in national and international exhibitions and his works of Anatolian mosaics, will be describing Istanbul in his new project.

Besides painting and making stained glass and mosaics, Semerci produced an inverted four-colored printed mirror and obtained its patent in 1990. He later concentrated his work on canvas and mosaic. He has participated in numerous international exhibitions and held the mosaic exhibition 15th Chicago Turkish Festival in 2018.

Semerci introduced the world to the important works unearthed during excavations in Turkey at the exhibition Contemporary Mosaics from Anatolia to the World. Currently, he works at his workshop in Istanbul's Kadıköy district.

In an interview with Anadolu Agency (AA), Semerci noted that the mosaic is a painting technique, adding that he has long worked on canvas, painting and stained glass and has carried out mosaic projects in his workshop over the last decade. Semerci stated that people consider mosaic as "breaking stones and bringing them side by side" but that it is one of the most difficult painting techniques, pointing out that various symposia, seminars and competitions should be carried out in order to spread mosaic culture in Turkey.

He said that historical mosaics are the expression of the cultural richness of a country, emphasizing that mosaics have come to attract interest in Turkey and the world over in the last decade. According to him, the number of visitors to museums has increased recently.

Indicating that Turkey is the country with the highest quality mosaics, Semerci emphasized: "Whoever is interested in mosaics in the world should see mosaics in Turkey." Pointing out that Gaziantep, Antakya, Şanlıurfa and Kahramanmaraş provinces are the main centers for the art of mosaics, Semerci said that Kahramanmaraş actually has a neighborhood with underground examples.

Recalling that there are important mosaics in many historical sites of Istanbul, especially in Hagia Sophia, Semerci stated that the main theme of the exhibition he plans to open this year is "Istanbul." Semerci stated that he has prepared 15-16 works for the exhibition, including depictions of historical buildings like Hagia Sophia, Topkapı Palace, Süleymaniye Mosque, Galata Tower, Rumeli Castle and of the iconic symbols that identify Istanbul, such as steamboats, seagulls and tulips.

"There is no way you can live in Istanbul and not be affected by this city. I have prepared an exhibition featuring Istanbul that will take place this year with my own compositions to describe my own period. In one of my mosaic works, there is the tughra of Mehmed the Conqueror inside Hagia Sophia. When Mehmed the Conqueror conquered Istanbul, he made his mark and this is the seal. There are footprints in that composition. The footprints are my signature on the mosaic. This is a cultural imprint and signature that I have left for future generations as we go through this period. This is how I combine these compositions and integrate my work. I will bring this exhibition to Istanbul and other places as well," Semerci noted.