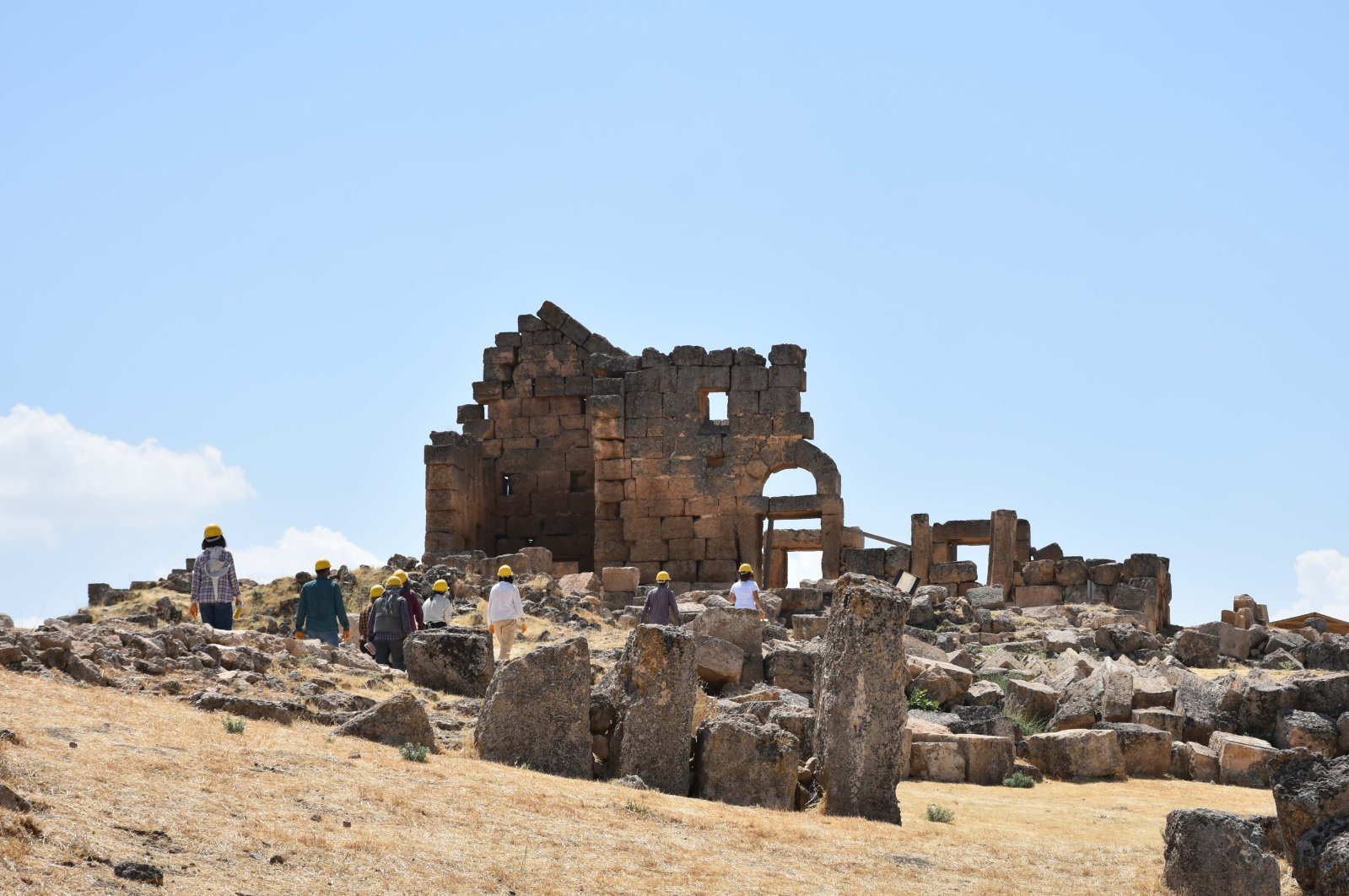 A photo from the entrance of Zerzevan Castle at the excavation site, Diyarbakır, southeastern Turkey, Aug. 13, 2020. (AA PHOTO)
by Anadolu Agency Aug 14, 2020 11:03 am
Edited By Irem Yaşar
RECOMMENDED

The 1,800-year-old entrance to Zerzevan Castle, located near the Çınar district in Turkey's southeastern Diyarbakır province, has finally been unearthed through excavations.

Excavations have been underway for six years at Zerzevan Castle, a site once used as a military settlement during the Roman Empire and now listed on UNESCO's tentative list for world heritage sites. The excavations are being conducted under the coordination of the Culture and Tourism Ministry with the support of Diyarbakır governor’s office, the Turkish Employment Organization (IŞKUR), Diyarbakır Museum, Diyarbakır Metropolitan Municipality, Çınar district governor’s office, the Association of Turkish Travel Agencies (TÜRSAB), Dicle University, Karacadağ Development Agency and Safir Salt.

The castle sheds light on history with what remains of its walls measuring 12 to 15 meters (39 to 49 feet) high by 1,200 meters long, its 21-meter-high observation and defense towers, a church, an administration building, residential houses, grain and weapons warehouses, underground sanctuaries, rock tombs, water channels and 54 cisterns on an area of approximately 60 acres (24 hectares).

According to Coşkun, Zerzevan Castle's impressive walls, observation and defense towers offer a unique peek into the past. The site is home to towers that once stretched 21 meters, of which 19 meters have been preserved. The professor also pointed out that the castle was once the border garrison of Rome. “The Romans were constantly at war with the Sassanids, which is why the thickness of the defensive walls varies between 2 and 3 meters. They built very high, very thick walls. We have seen that they started to work on the fortification line in the castle,” Coşkun added.

Emphasizing that they uncover new elements of Zerzevan Castle every year, Coşkun continued: “This year we located the entrance to the 1,800-year-old castle. We have identified an important point in terms of defense architecture of the castle. The castle is very important in terms of changing the history of the region and tourism. Some 450,000 local and foreign tourists visited the castle last year. Had it not been for the pandemic this year, we were expecting 1 million visitors. Despite this, 100,000 visitors came in eight months. It is an important figure. This number could reach 300,000 by the end of the year.” Coşkun added that they have started to work in line with the goal of the castle's inclusion on UNESCO’s World Heritage List.

Zerzevan Castle sits on a 124-meter rocky hill at a strategic point between the ancient cities of Amida and Dara. Due to its location, the castle dominates the entire valley and controls a large area on the ancient trade route. As the border garrison of Rome, the castle witnessed great struggles between the Romans and the Sassanids.

The history of Zerzevan Castle dates back to the Assyrian period (882-611 B.C.). During the Roman period, the main military settlement version of it was built and was used continuously until 639 B.C., when the Islamic armies conquered the area. The walls and structures of the settlement were repaired during the periods of emperors Anastasios (A.D. 491-518) and Justinianos (A.D. 527-565), and some of them were rebuilt.