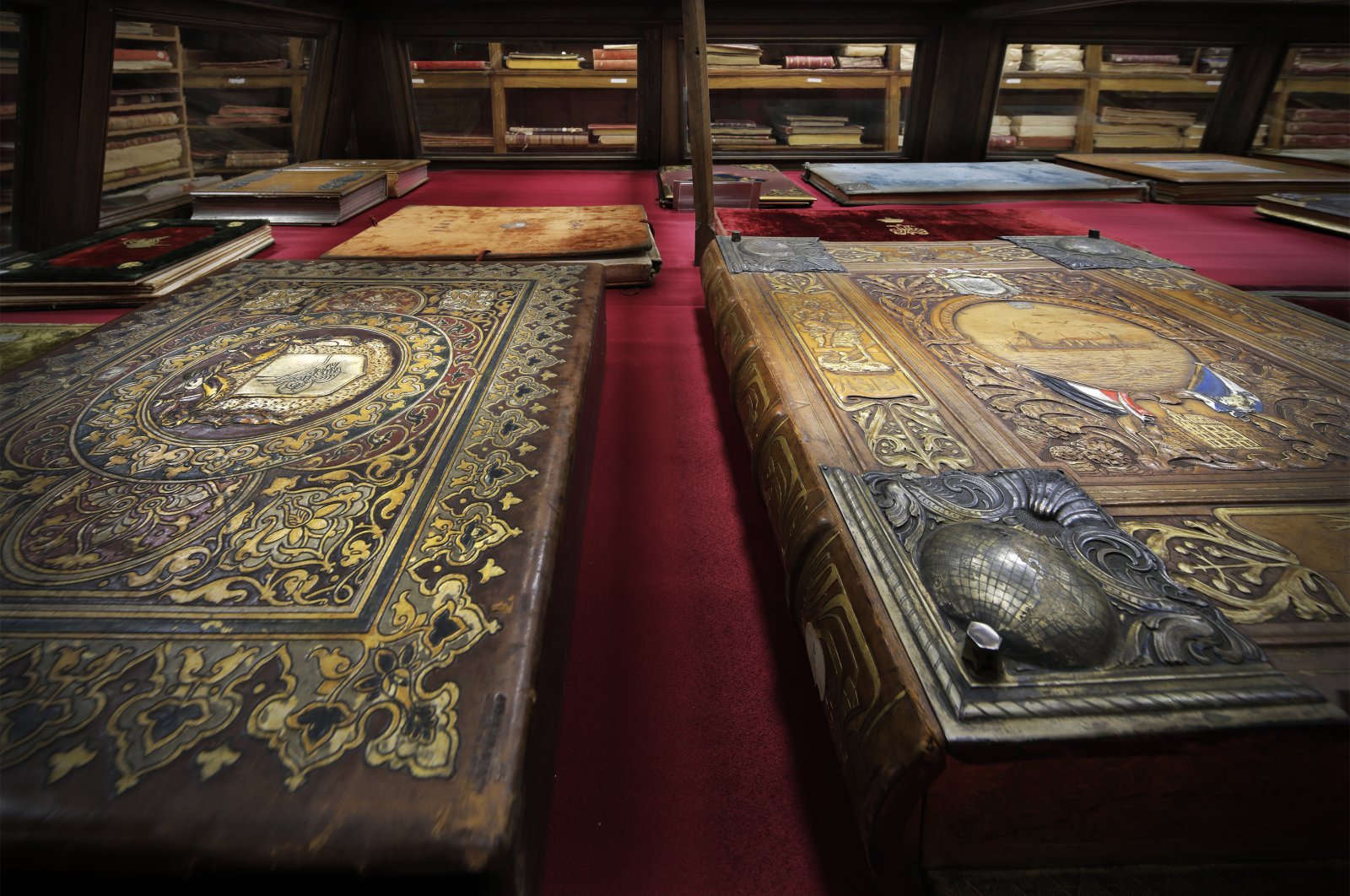 Skins of the albums in the Yıldız Photography Collection are distinguished elements of art. (AA Photo)
by Anadolu Agency Apr 09, 2020 3:07 pm

Istanbul University digitized the Yıldız Photography Collection of Sultan Abdülhamid Han, the largest visual collection of the 19th century preserved in the Rare Books Library, for the use of researchers

Istanbul University (IU) is shedding light on history by presenting Sultan Abdülhamid II’s Yıldız Photography Collection, one of the richest visual archives in the world, to researchers on digital media.

The Sultan Abdülhamid II’s Yıldız Photography Collection Project, carried out by the IU Rectorate, the Secretariat General of the Grand National Assembly of Turkey and the National Palaces Administration under the auspices of the Turkish Presidency, aims to preserve pictures and albums, which are protected in the Library of Rare Works, and to prevent the deterioration of works during researchers’ investigations.

Nine hundred eighteen albums have been opened for digital access as part of the project, for which preparations were initiated in 2013. More than 36,000 photographs of cultural heritage from the albums have been preserved for future generations.

The collection, defined as "the biggest visual archive of the 19th century" and consisting of photographs taken during the time of Sultan Abdülhamid II, offers researchers the opportunity to read, interpret and identify the social, cultural, economic and political history of the period.

In an interview with Anadolu Agency (AA) through video conferencing, IU Rector professor Dr. Mahmut Ak stated that Sultan Abdülhamid II’s collection is one of the rare photography projects of Turkish cultural history and a state project on its own.

Ak stated that "Book of Travels," written by Evliya Çelebi in the 17th century, matches up with this collection in terms of its philosophy and main concept and continued, "Çelebi did not set out to write a travel or geography book but he transferred a cultural treasure, which records the state structure of that period in all aspects from language to art, from anthropology to geography, to next generations."

Ak noted that Sultan Abdülhamid II planned to record the state's status of the time and ensure the destiny of the Ottoman Empire through this photography compilation, adding: “This collection of Sultan Abdülhamid II is a very original and large-volume project both in terms of world administrative history and artistic activities. This is a wealth of our nation and our country, which has been under our protection for nearly 100 years.” Ak said that even its skins, apart from albums and photographs, are distinguished elements of art. “Two selections of this collection were sent to the British Museum, with one later going to Washington, in order to demonstrate the superiority of the state in international relations and to show that we are the founders of civilization. Apart from these 918 albums, there are known to be 800 photographs in 51 albums sent to the U.K. and 1,700 photographs in 51 albums sent to the U.S.,” he noted.

Ak said that they have protected this collection safely under proper climate control for nearly 100 years, adding that no part of the albums has been destroyed, from the cover to the photographs inside.

Pointing out that civil architecture, religious architecture, official buildings, squares, complexes, bridges, caravanserais, schools, hospitals and roads belonging to the Ottoman period have been recorded through these photographs, Ak continued: “When we focus on the photographs, we can see hundreds of details that are not visible to the naked eye. Even people in countries that were once within the Ottoman Empire, but are not within the borders of the Republic of Turkey now, are able to follow their own lineage through these photographs. In other words, they provide the opportunity to precisely identify people. So much so that it is possible to follow almost everything including clothes, shoes and the fabrics of the day. As these photographs can be downsized and enlarged by technology today, when you want to focus on a point in the photograph, you do not lose any image quality, even if you enlarge it over and over again.”

Ak stated that they implemented this project with the idea of making the collection more easily accessible through technology, adding: “Digitization is not a magical thing. It is necessary to make preliminary preparation for it without damaging the works. The collection was cleaned with special brushes first. We digitized them with special high-resolution devices. The system was installed in the Library of Rare Books. This project has been carried out in a multifaceted way by the staff assigned by the National Palaces Administration, the restorers and other technical experts we recruited. Another nice thing is that they were recorded by the optical character identification method. Thus, long-sought cultural elements have become very easily accessible.”

During the preparation, digitization and cataloging of the photographs Ak noted, they have taken images in three different formats, reaching approximately 75,000 frames.

The project is a philosophical source of ideas and motivation for the researchers, Ak said, adding that the project has not been completely finished. The photograph albums have been revised and new studies are being carried out.

Technical infrastructure of the project

As part of Sultan Abdülhamid II’s Yıldız Photography Collection Project, whose technical process is being carried out by the Digitization Unit of the Library and Documentation Department, a team was formed for all phases of the technical process.

Ten professional line scanners were provided for publications. These scanners work in A0, A1 and A2 sizes, in line with publication types and characteristics. In addition, one professional camera and workstation were made available in early 2019 for digitization of museum artifacts.

In order to carry out digitization projects under quality conditions, personnel are specially trained and the process is controlled in accordance with digitization policy, as it was shot according to the TS 13298 Information and Documentation-Electronic Document Management Standard.

The project was done in two steps. First, the works to be photographed were wiped with micro-fiber anti-static cloth and dust was removed with special nanotechnology brushes. After this process, the page numbers, color resolution, white balance, page spacing and edge binding of the photographs taken on the workstation computer were checked one by one. The materials were then captured with high-resolution equipped scanning devices in three different formats and transferred to electronic media, to the network system, to backup units and to the cloud. During this phase, which took about a year, the photographs were taken one by one and a total of 75,000 frames were taken.

In step two, the materials were cataloged to provide easier access to digitized publications via an automation system. Digitized images and catalog tags were matched and transferred to the electronic media.

The completed publications have been made available with one-click access through the library automation system. In this way, researchers can quickly access the digitized publication on the internet regardless of time and space. The scanning was carried out by the optical character identification (OCR) method, which means researchers can search with all kinds of lexical entries and easily access the information they are seeking.

The collection of photographs, which covers not only the Ottoman Empire but also countries far and wide, comes from the work of 263 photography masters and photography houses of the time.

Some of the photographs, which Sultan Abdülhamid II used as a means of recognition and identification, feature urban and natural spaces, palaces, factories, ships, weapons, various industrial products, religious and state elders, museums and works of art in the U.S., Europe, and some Far Eastern countries, Japan in particular.