2,300-year history of Uzuncaburç ancient city to be revived 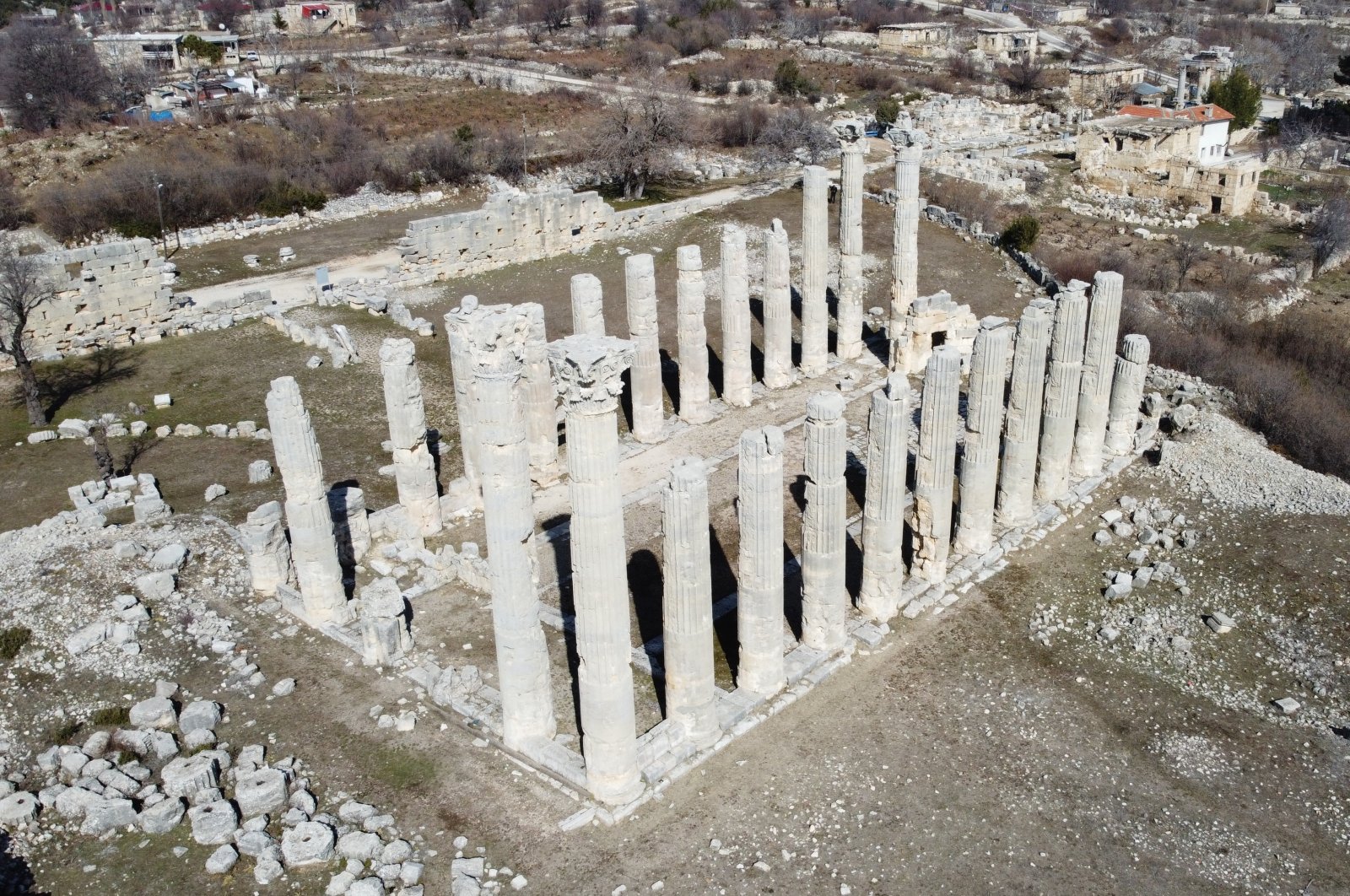 Reminiscent of world-famous Ephesus in western Izmir for its tall columns, Mersin's future tourist destination is expected to quickly regain its former glory

Located 30 kilometers (18.64 miles) north of southern Mersin province’s Silifke district, the ancient city of Uzuncaburç will be restored to reflect its 2,300-year-old history within the framework of a specially prepared project.

The restoration and survey work will be conducted by a team led by Ümit Aydınoğlu, an associate professor from Mersin University's Archaeology Department, and affirmed by the Ministry of Culture and Tourism as part of its investment plans for 2021. The project, scheduled to start this year, will initially be centered around Uzuncaburç's historic theater. It is aimed at preserving the original state of the city and bringing in tourism.

The ancient city, one of the Hellenistic places that has survived in Turkey, attracts history enthusiasts year-round with its colonnaded street, temples, monumental fountains and theater, all of which are well preserved.

Uzuncaburç was the place of worship for the Olba Kingdom in the Hellenistic period. Once there, visitors are greeted with the 7-meter-high Ceremonial Gate followed by the city's historical fountain. Further, in a large courtyard, the Temple of Zeus is surrounded by 36 large columns. The city also has an ancient theater with a capacity of 3,000 people. The theater was built during the Roman Empire about 1,900 years ago.

The ancient city's Turkish era began when the Turks entered Anatolia in 1071 with the Battle of Manzikert, fought between the Byzantine and Seljuk Empires.

The city is called “Uzuncaburç,” meaning long bastion, due to the central structure that is its landmark.

Speaking about the restoration work to Anadolu Agency (AA), Mersin Governor Ali Ihsan Su said Uzuncaburç is one of the most important tourism destinations in Mersin.

Su explained the details about how the planning was conceptualized around the archaeological artifacts of the city, saying: “The projects for Uzuncaburç’s ancient theater, the Temenos Wall and the Hellenistic Tower have been prepared. Work will begin with the restoration of the ancient theater this year. There are 11 houses in the area, and they have been expropriated. After the restoration work, we will bring the houses into tourism. These will be designed according to the needs of the guests for such purposes as boutique hotels, cafes or exhibition houses.”

He added that an approximately 1-kilometer-long Roman road was unearthed during excavations in the region and continued: “We are preparing a very special destination project for Uzuncaburç. Those who come here will both visit the ancient city and enjoy the bungalows. At the same time, they will be able to trek along the Roman road and go down to the Narlıkuyu neighborhood. When the project is finished, we will hopefully have carried the touristic attraction of this place to a much better point. Our work continues fast. We will complete all the works as soon as possible and offer them to our guests.”

Excavation head Ümit Aydınoğlu also emphasized that Uzuncaburç has sacred areas belonging to the ancient periods. “The Temple of Zeus in the ancient city is a very large structure attributed to the Greek deity called Zeus and served as the religious center of the entire region. With its surrounding wall called ‘Temenos,’ temple and monumental entrance gate, it is perhaps one of the largest structures of the Hellenistic period in the ancient world. Therefore, we can define Uzuncaburç as a religious center and the capital of the region.”

Aydınoğlu also pointed out that “Uzuncaburç was an ancient city that dominated its surroundings. Since it was the capital city, it had connections with the entire surrounding region. You can get here in many ways, which was also the case in the ancient period. Around it are rural settlements, castles and towers. All of these structures were built to protect the capital. As for agriculture, all the ancient farms in the region are located around the ancient city.”

Aydınoğlu is particularly excited about one part in particular, saying: “The ancient theater in Uzuncaburç is crucial to us. We have done archaeological excavations here in recent years. It is a very well-preserved ancient theater with a capacity of 3,000 people. The stage building is a two-story structure. The superstructure collapsed as a result of an earthquake, but we removed it from under the ground. The project for the restoration of this place was started and got through the committee. We are planning to start both restoration and reinforcement works this year with the support of the Ministry of Culture and Tourism.”

The excavation leader also stated that the architectural structure of the ancient city goes back 2,300 years to the third and second centuries B.C. and that research in the region is ongoing.

Confirming Uzuncaburç's timeline, Aydınoğlu noted: “The inscription on the wall surrounding the ancient city reads that Seleucus I Nicator, one of the generals under Alexander the Great, came here and repaired the roof of the Temple of Zeus. The inscription proves that this place was sacred at least in the third century B.C. This is very important to us.”