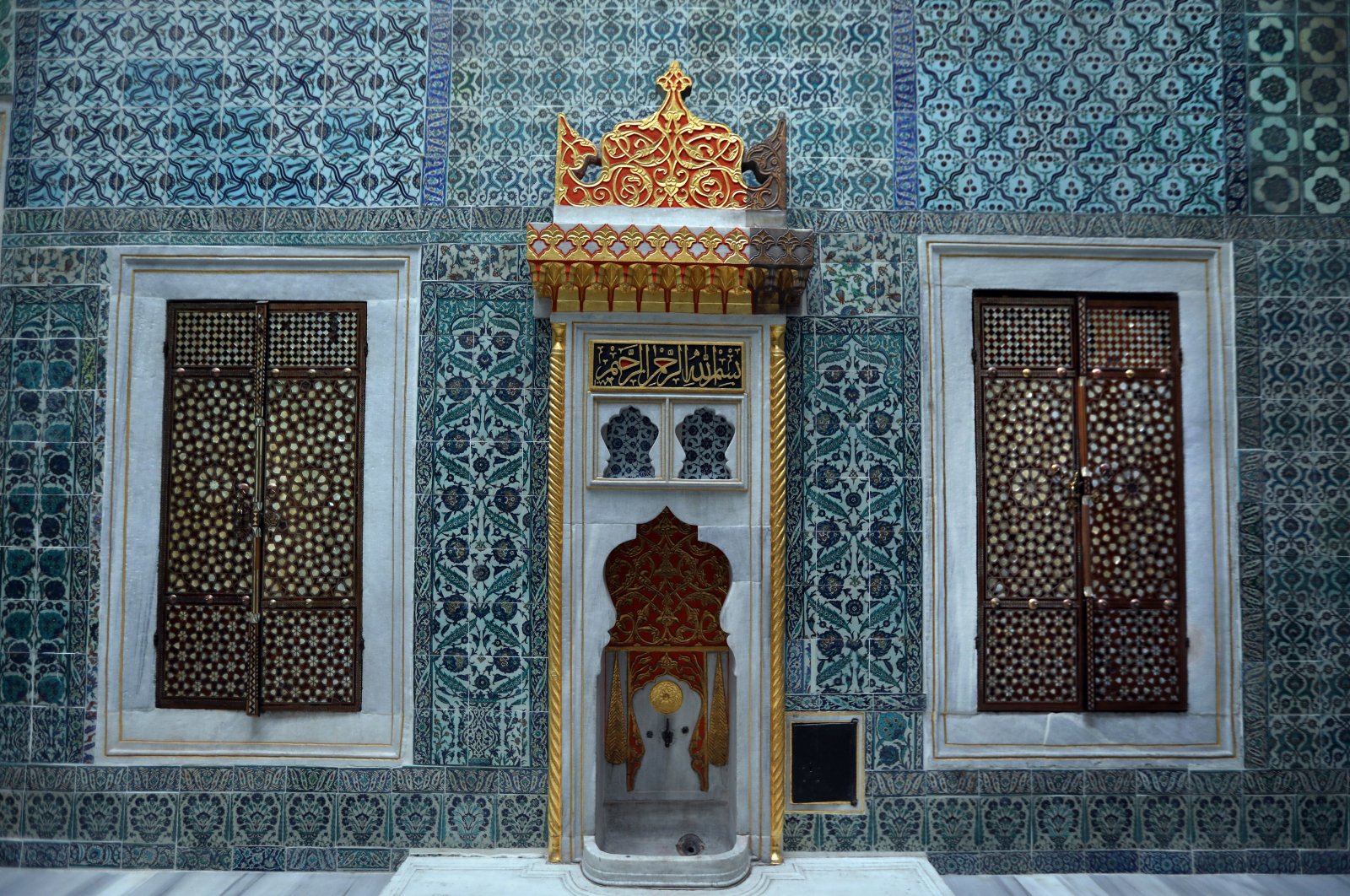 The restoration work at the Topkapı Palace's Court of the Queen Mother (Valide Taşlığı), Hall with a Fireplace (Ocaklı Sofa), and Hall with a Fountain (Çeşmeli Sofa) has been completed.

Topkapı Palace is one of Istanbul's most famous landmarks and the former house of the Ottoman sultans.

With the completion of the restoration work, which began in 2014, visitors will now be able to see these sections every day except Tuesdays, when the palace is closed.

Although centuries have passed, the Court of the Queen Mother, Hall with Fireplace, and the Hall with a Fountain remain the most attractive sections of Topkapı Palace's Imperial Harem (Harem-i Hümayun) apartment, where the sultans lived with their families in private.

The restoration of these sections gained momentum with the transfer of Topkapı Palace to the National Palaces Administration, which operates under the Turkish Presidency. The sections, with all their magnificence, are now ready to welcome visitors and history enthusiasts.

The sections house the structures that formed the Ottoman harem administration. They were the dwellings of the members of the Ottoman Dynasty and are extremely important in terms of their architecture and representation of the styles of the period between the 16th and 19th centuries.

The first of these sections is the Court of the Queen Mother. This area is the central courtyard, around which the buildings that make up the harem are laid out per the palace hierarchy. Resembling the architecture of classical Anatolian houses, it has its own yard and several two-story structures around it.

On the side of the Golden Horn of this section, there is the Apartment of the Queen Mother (Valide Sultan) and the Sultan's Bath. The columns on both sides of the Court of the Queen Mother are very valuable in terms of being the first examples of Ottoman architectural art. There are arches between the columns, and there are rooms with windows facing the court above the arches. The stone walls of the court are covered with tiles from various periods. As part of the restoration, conservation works of the domes and the vaults were carried out primarily in these areas, and the restoration of wall tiles was completed.

Another important place in the harem is the Hall with a Fireplace, which is located between the Court of the Concubines (Kadınefendiler Dairesi) and Hall with a Fountain. The hall gets its name from the fact that it houses the largest fireplace located in the harem.

Estimated to have been built in the early 17th century, it was renovated by the order of Ottoman Sultan Mehmed II after the fire of 1665. It is covered with a rectangular dome, decorated with hand-drawn patterns and colored tiles. The wings of the gate, which opens to this hall, are inlaid with mother-of-pearl and ivory. Opposite the door, the large bronze fireplace welcomes visitors.

On the upper parts of the hall, whose walls are covered with 17th-century tiles from top to bottom, there is a strip of the blue and white inscription of basmala and praises for Sultan Mehmed IV. There is an entrance to the sultan's apartment from the hall, and it connects the apartments of the favorites and crown princes to the sultan's apartment through the Hall with a Fountain. Considering its connection to the Court of the Queen Mother, the Hall with a Fireplace performs a function that can be called the heart of the harem.

The hall gets its name from the fact that it has one of the most beautiful Ottoman palace fountains. The Hall with a Fountain is the place where the şehzades (princes) and concubines wait before entering the sultan's apartment. In this position, it serves as a crossing hall.

Inscriptions on the sofa show that this structure and the Hall with a Fireplace were built by the order of Sultan Mehmed IV. Built-in closets located in this place affirm the knowledge that this area was once used as a pantry. The Persian couplet on the exterior surface of the door wings, which allow the transition from the Hall with a Fireplace to this hall, means: "O Sultan, may your state be long-lived until the end of time, may your friends be happy and cheerful, and may your enemies be sad and aggrieved."

Speaking to Anadolu Agency (AA), National Palaces Administration President Dr. Yasin Yıldız said the harem of Topkapı Palace is a section that is followed with great interest by local and foreign visitors.

Yıldız said intensive restoration work continues at Topkapı Palace. He added that the restoration of the third courtyard, known as the Enderun Courtyard, is nearly complete. "The Dormitory of the Treasury Ward (Hazine Koğuşu) and the Dormitory of the Campaign Pages (Seferli Koğuşu) inside them will be opened for visitors next year. Here, we will have a chance to display some exceptional palace collections."

"Fatih Kiosk, one of the oldest structures in Topkapı Palace, is also nearly ready for public visit. We're doing some very sensitive restoration work, especially removing the concrete added to the domes during the Republican era. It will also meet visitors next year."

"Routine maintenance and repairs continue in the Imperial Council Chamber (Divan) and Tower of Justice (Adalet Kulesi), located in the second courtyard of Topkapı Palace. It is an area circulated by visitors all the time. Besides, we expect that the restoration work of the sultan's apartments within the harem will be completed by next year," Yıldız said.