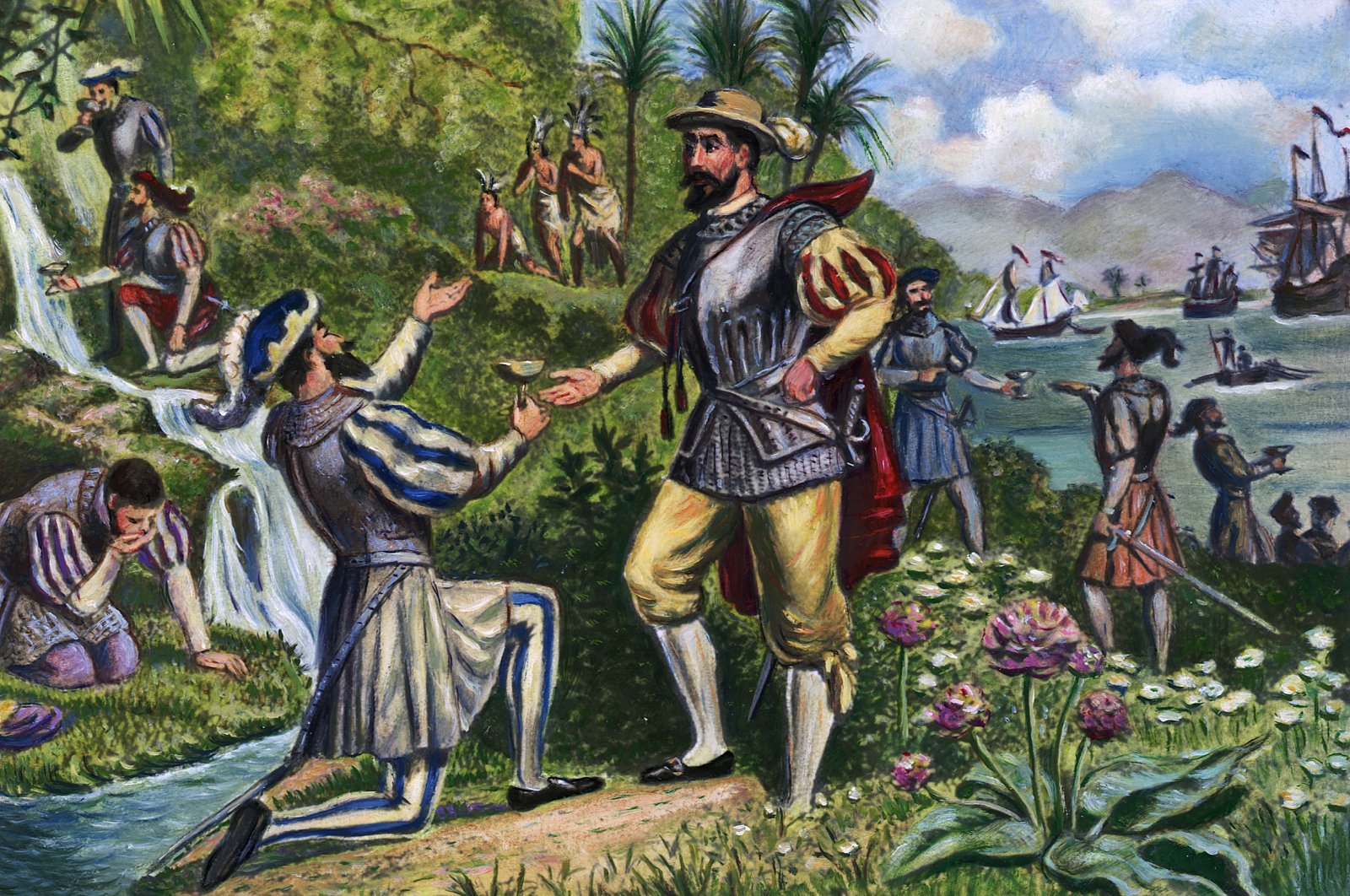 An illustration shows a scene in which Spanish explorer and conquistador Ponce de Leon is given water from the "Fountain of Youth." (Getty Images)
by ALİ TÜFEKÇİ Jan 13, 2021 1:57 pm

Tales of discovering immortality have been recounted around the world for thousands of years with the myth of the fountain of youth. What is the secret of this spring that promises to restore the youth of anyone who drinks or bathes in its waters?

The year 2020 was a challenging year for the entire world. The destructive wave of the coronavirus outbreak spread over all areas of life, both physically and spiritually. Moreover, the fear of death caused by COVID-19 spread faster than the disease itself. But, we can reverse all these adversities with a change of perspective.

After lamenting the darkness of a period, Sufi poets of the previous century gave solace by saying: “But ab-ı hayat (the fountain of youth) is in darkness.” In other words, darkness and bad situations contain the beauty that gives life to people. Let us take a look at the profound literature that has surrounded this water, which is called “ab-ı hayat” in the East and “the fountain of youth” or “elixir of life” in the West, and remind ourselves that we may find the spring that will restore our youth in these challenging days.

Water symbolizes the essence of the source of creation. It is considered sacred because it is the source of life, growth and flourishing for all things. It symbolizes rebirth, regeneration and long life.

The water of life is the first water and is the creative power and healer of life. This water heals, rejuvenates and immortalizes souls and bodies. For this reason, this water, which is widely addressed in all world myths, is an important source of inspiration for many artists.

For instance, "The Epic of Gilgamesh" by the Sumerians mentions the fountain of youth in a different form. King Gilgamesh, considered to have lived around 2700 B.C., embarks on a journey to find Utnapishtim, an immortal human who has survived the biblical Great Flood. Gilgamesh finds Utnapishtim after an arduous journey.

Utnapishtim tells Gilgamesh that a plant far away, living at the mouth of rivers or at the bottom of seas, is the source of immortality. Gilgamesh finds the place described by Utnapishtim, dives into the water and plucks the plant. But a snake smells the scent of the plant, snatches it away and escapes.

The water of life also takes a place in Roman mythology. The Roman God Jupiter turns his lover Juventa, a water nymph, into a fountain that rejuvenates those who bathe in its water. Juventa is referred to as a goddess of youth. It is because of this myth that the fountain of youth is called “Fontaine de Jouvence” in France.

There are various narratives about the fountain of youth in other mythologies as well. It is one of the most addressed themes in the Eastern world, especially in Ottoman writings.

The Quran refers to the water of life in the story of Moses. Moses and his young friend Joshua seek a person who has innate science that cannot be obtained through hard work but is bestowed by God alone. This person, named Khidr, is at the place where the two seas meet. When they arrive at this place, the dried, dead fish they have taken with them to eat comes to life and jumps into the sea thanks to the water splashed on it at the sacred location.

Historical sources convey various information about the confluence of these two seas and where this water of life can be found. There are rumors that this spot is Istanbul, referring to Joshua's Hill (Hz. Yuşa) on the Anatolian shore of the Bosporus.

Moses meets Khidr at this sacred spot and goes on a journey full of miracles and exemplary experiences. Semih Kaplanoğlu's film “Buğday” (“The Grain”) is a post-modern fiction that portrays this journey.

Khidr's identity and his discovery of the water of life are related to a person named Dhu al-Qarnayn, who goes by the name of Zülkarneyn Iskender (the Turkish form of the English name Alexander) and is mentioned in the Quran. Legend says that Dhu al-Qarnayn hears that there is a water of life in the “land of darkness” and decides to seek it. Accompanied by his cousin Elisha, he sets off with his army. The second name of Elisha is Khidr. On the way, they break away from the army because of a storm. When they reach the land of darkness, Dhu al-Qarnayn turns right and Khidr goes left, trying to find their way.

After traveling for days, Khidr hears a divine voice. He sees a light and finds the fountain of youth there. He drinks from it and washes himself in it. Thus, he attains both eternal life and special powers. Then he meets Dhu al-Qarnayn. He is also seeking the fountain of youth but cannot find it, and he dies a while later.

According to another legend, Dhu al-Qarnayn, learning of the fountain of youth from scholars, sets out with his army to search for it. He loses all his soldiers, with the exception of his cook. The cook goes to a fountain to wash salted fish. When he washes the fish, it comes to life. Understanding what he has discovered, the cook also drinks the water. When he recounts his experience, Dhu al-Qarnayn searches for the fountain but cannot find it. He gets angry at the cook and tries to kill him. And when he fails to kill him, he ties a rock around the cook's neck and throws him into the water. The cook transforms into an immortal sea jinni.

As both of these Iskenders accomplished major conquests in their lives, they are sometimes mistaken for each other. The works on history called “Iskendername,” which were a tradition in Ottoman literature, are full of details that explain the legends of these two different figures.

In popular culture, it is believed that two saints named Khidr and Elijah gained immortality by drinking the water of the fountain of youth. The former is the savior of those on land, and the latter is the savior of those at sea. While it is a great blessing to see these two people, they occasionally appear to distinguished people. Festivities are held on May 6 in hopes of seeing them. This day is called “Khidr-Elijah,” which turned into “Hıdırellez” in Turkish over time. However, setting all these popular beliefs aside, the Quran says that no one is immortal in Surah Al-Anbiya, the 21st chapter of the Quran with 112 verses.

Therefore, the water of immortality actually has Sufi significance. Some Sufi scholars say that Khidr and Elijah died, but they are reincarnated and help people. For example, it is said that Muslim scholar Ibn Arabi learned various wonderful words and secret information, the accuracy of which was later confirmed, from Khidr. The water of life symbolizes innate science which has a divine source.

According to another interpretation, it also refers to the manifestation of the name of Allah, “Al-Hayy,” signifying the attribute of everlasting life. Those who understand the secret of this name are considered to have drunk from the fountain of youth.

The famous Sufi Imam Rabbani Ahmad al-Faraqi, who lived in the 17th century, says: "The center of the divine inspiration that feeds the souls of the saints, i.e., their hearts, is the fountain of youth. He who tastes a drop from it has found immortal life and has achieved eternal bliss and happiness.”

Many Sufi poets like Yunus Emre refer to this water in their works as well. The great philosopher Mevlana Jalaluddin Rumi likens Shams Tabrizi, his spiritual instructor, whom he considers his savior, to the fountain of youth. What is your fountain of youth?