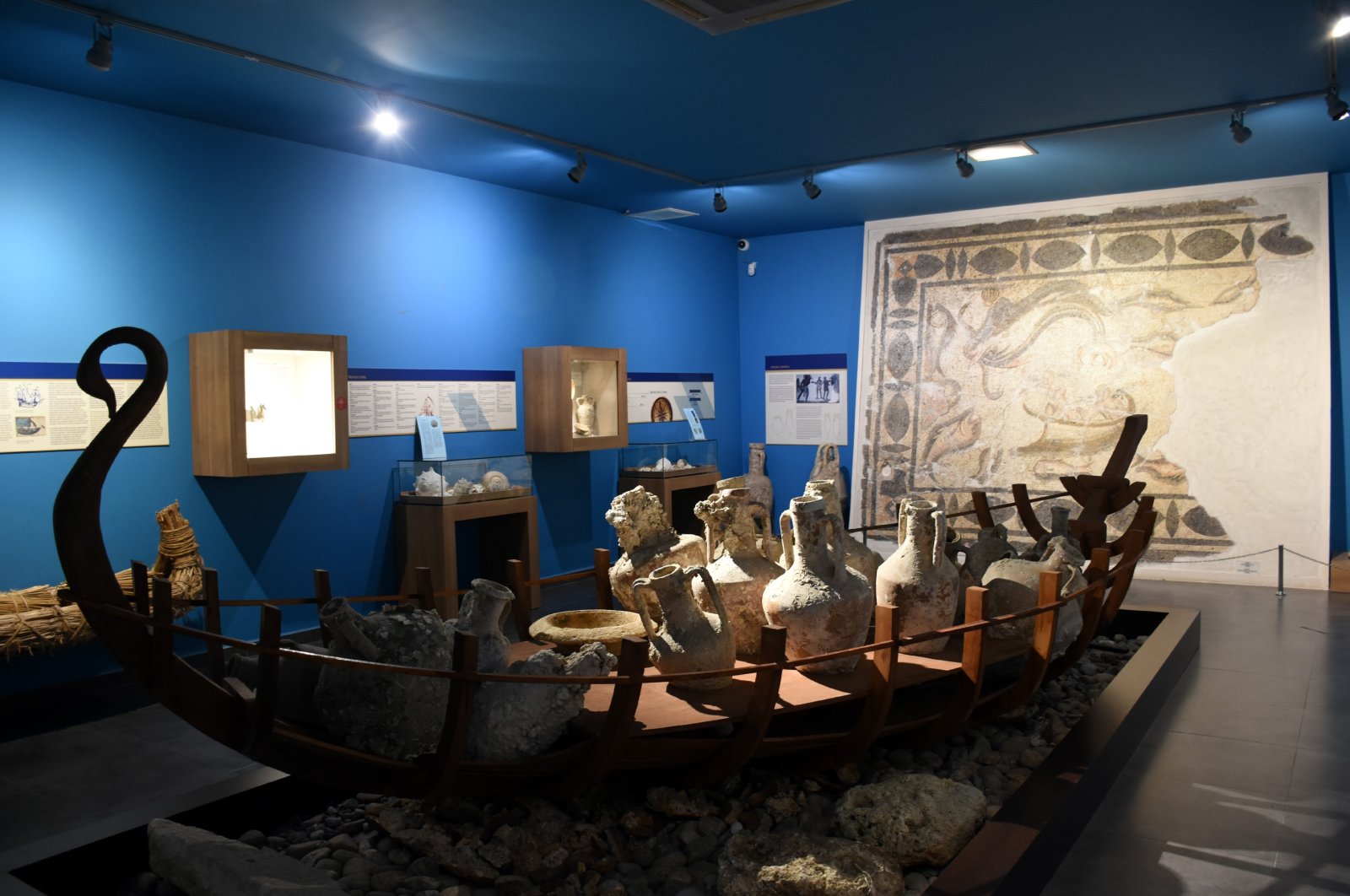 The ship loaded with ancient amphorae found by divers in the Mediterranean seabed is on display at the Alanya Archaeological Museum, Antalya, southern Turkey, Jan. 12, 2020. (AA Photo)
by DAILY SABAH WITH AA Jan 15, 2021 1:58 pm

The Alanya Archaeological Museum, featuring displays of cultural assets belonging to the Neolithic and Hellenistic periods as well as the Roman, Byzantine, Seljuk and Ottoman periods, provides information about Anatolian civilizations to its visitors in the resort city of Antalya on the Mediterranean coast.

Located in the Alanya district, once home to many ancient civilizations, the museum opened in 1967 as a home for artifacts from the Bronze Age, and Urartu, Phrygian and Lydian periods. The original artifacts were transferred from the Museum of Anatolian Civilizations in the capital Ankara. In 2013, many new sections were created at the museum with chronological and thematic displays.

While items from the ancient civilizations of Anatolia during the Paleolithic era through the Chalcolithic period and to the Bronze Age are on display in the first showcase at the museum's entrance, the next showcase is dedicated to the Hittites, the Urartians, the Phrygians and the Lydians.

There are also antiques made of bronze, marble and glass as well as earthenware, mosaics and coin collections from the Archaic, Classic, Hellenistic, Roman and Byzantine periods on display at the museum. Turkish-Islamic monuments belonging to the Seljuk and Ottoman periods also occupy prominent spots at the museum. The most significant object on display is the bronze Heracles statue, located in a distinct hall among the sections inspired by the urban identity of Alanya.

A separate room of the museum explores a nautical theme. A full-size model of a ship used to transport goods such as wine or olive oil stands at the center of this section. The ship is loaded with ancient amphorae found by the divers in the Mediterranean seabed.

A garden also surrounds the venue, which acts as an open-air museum. The area features a large number of artifacts related to the funeral practices of the Roman era and the Islamic period of the Seljuk, Ottoman and Republican periods. Some exhibits related to the agricultural practices of the Romans, including oil extraction methods used in the ancient Mediterranean region, are also on display.

Speaking to Anadolu Agency (AA), Alanya Museum Director Seher Türkmen said they are working to preserve the artifacts, display them and preserve them for future generations.

Türkmen noted that there are a large number of cultural assets in the districts of Gazipaşa, Gündoğmuş and Alanya in Antalya and the museum identifies and registers these works since the districts are the responsibility of the Alanya Museum Directorate.

Indicating that archaeological excavations were carried out in these districts, Türkmen said that the data and artifacts go through a delicate scientific process, and unearthed artifacts are being delivered to their museum. She stated that the pieces are exhibited in the museum, contributing to the promotion of Alanya and the country.

Türkmen said that artifacts belonging to Anatolian civilizations are introduced to visitors in chronological order in the entrance hall of the museum. Emphasizing that the artifacts contribute to the education of students, she said: “Turkish and foreign visitors also learn about Anatolian civilizations. There are a large number of artifacts in showcases categorized under the titles of mythology, trade, sports, health, glass artifacts and jewelry in our museum.” Among the most prominent of these artifacts are a Phoenician inscription, the oldest written document found in the region dating back to 625 B.C., a tile featuring the titles of Seljuk of Rum Sultan Kayqubad I found in the excavations of Alanya Castle and the lead seal featuring the portrait of Seljuk Sultan Kayqubad I.