Anatolian women's motifs on Bünyan and Yahyalı carpets under preservation 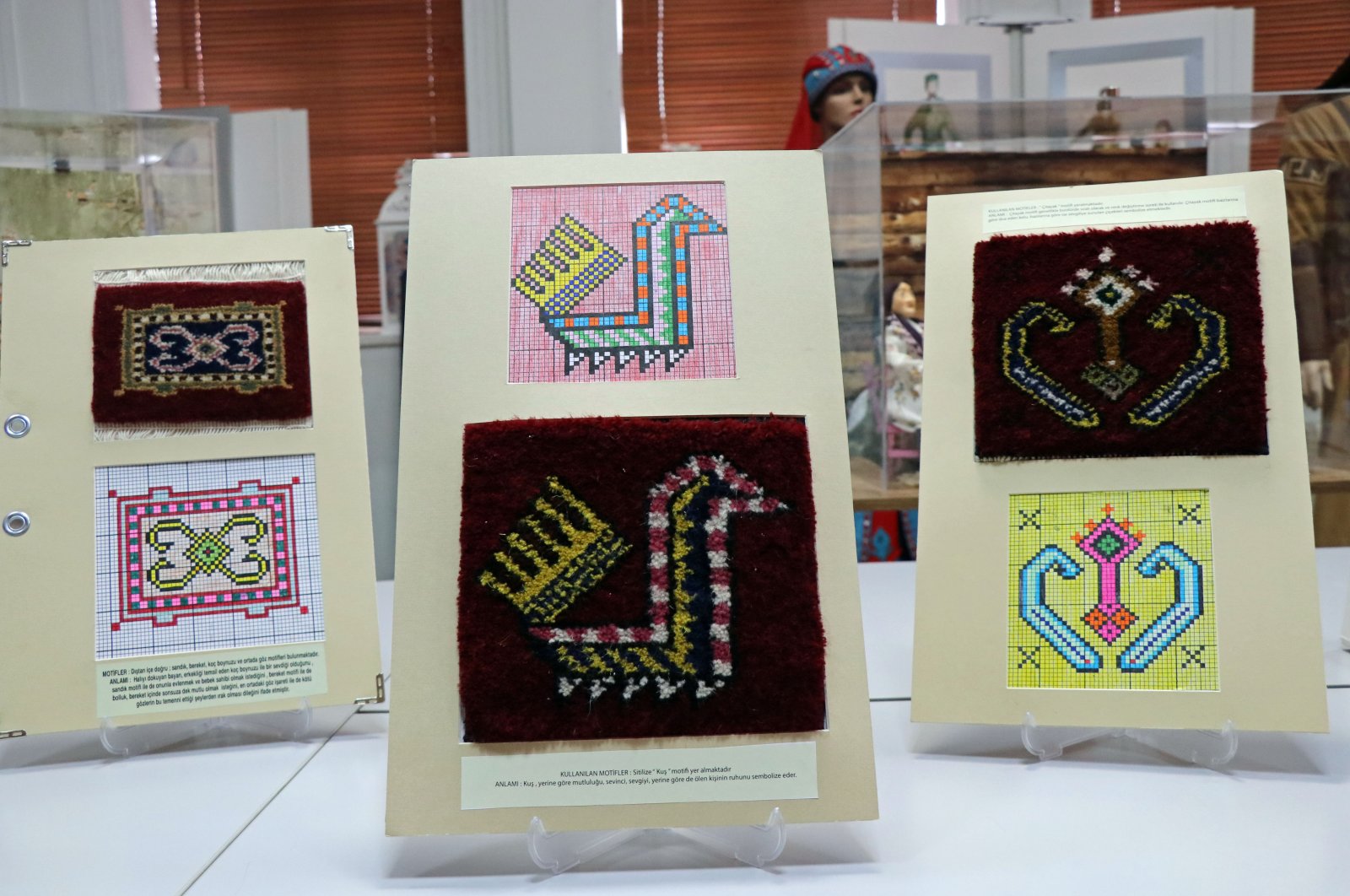 Some examples of motifs embroidered on carpets and rugs by Anatolian women for centuries. (AA Photo)
by Anadolu Agency Mar 31, 2020 1:14 pm
RECOMMENDED

The motifs embroidered by women on famous Bünyan and Yahyalı carpets for centuries have been studied and registered with their meanings by the Kayseri Advanced Technical School for Girls.

Carpet looms that are present in almost every house in central Turkey's Kayseri province, especially in the districts of Bünyan and Yahyalı, are fading into oblivion for reasons such as the emergence of ready-made carpets and the introduction of women into the business life.

The project called "Wedding of Knots" was prepared by Kayseri Advanced Technical School for Girls in order to ensure that the carpet motifs that are handed down from one generation to another, sometimes through memory, sometimes through swatch cards, are not forgotten and are transferred to future generations.

Within the scope of the project, a team of six people explored the types of motifs and their meanings on carpets woven in Yahyalı and Bünyan districts for two years. As a result of the research, 24 motifs were registered.

Zühtü Ulusoy, a history teacher who works at the research unit of Kayseri Advanced Technical School for Girls, told Anadolu Agency (AA) that weaving carpets and rugs is the national art of Turks. Pointing out that the Pazırık carpet, known as the oldest carpet in the world, is woven with Turkish-style knots, Ulusoy said: “Other nations lay claim to this, but the fact that Gördes, which is used in this carpet, is a Turkish knot indicates that the carpet is a Turkish carpet. Also, the fact that the tails of the horses on the Pazırık carpet are knotted like in Turkish traditions is another indication that they were woven by us. This carpet shows that carpet weaving in Turks goes back 2,500 years.”

Ulusoy said young girls and women have woven their feelings, thoughts, fears and expectations on carpets and rugs for centuries.

Stating that these feelings are sometimes described with a tree, sometimes with flowers or with a symbol, Ulusoy noted that they found out that the carpet looms were sold for TL 200 per ton during their talks in Bünyan within the scope of the "Wedding of Knots" project.

Ulusoy stated that they obtained carpet motifs from swatch cards of craftsmen who were engaged in carpet weaving in Bünyan, and they obtained others by taking photographs of carpets of a tradesman in Yahyalı. “There is no swatch card of Yahyalı carpets. We took photographs of carpets from the shopkeepers. We photographed the motifs on the carpets. Our colleagues in the design graphics department drew it on paper. Later, motifs were woven on small carpet looms. The motifs on Yahyalı carpets were transferred from mother to daughter, from memory to memory. These motifs reflect Yörük Turkmen culture. The weft, warp, noose and everything of Yahyalı carpets are made of pure wool. Yahyalı is a more introverted district, so the carpet motifs are hardly influenced by its surroundings. Bünyan is a more open area. Here, we can see the influence of the carpet motifs of Istanbul of that period. There were Armenian carpet weavers going to the palace in Istanbul. They somehow transferred the motifs they acquired from there to Bünyan,” Ulusoy said.

Ulusoy expressed that the tree of life motif, which is embroidered on carpets, points to long life, the universe and eternity, and the birds around it express the souls that have passed away.

Indicating that the motifs of waterway describe purification, Ulusoy added: “There is a Hun rose motif that we see very often, a motif that has been present for 2,500 years. This motif has always been embroidered on carpets, cushions and pillows. We sometimes see a chest motif on the carpets. It means that the person loves somebody and has a dowry. The spots around this motif tell about abundance.”