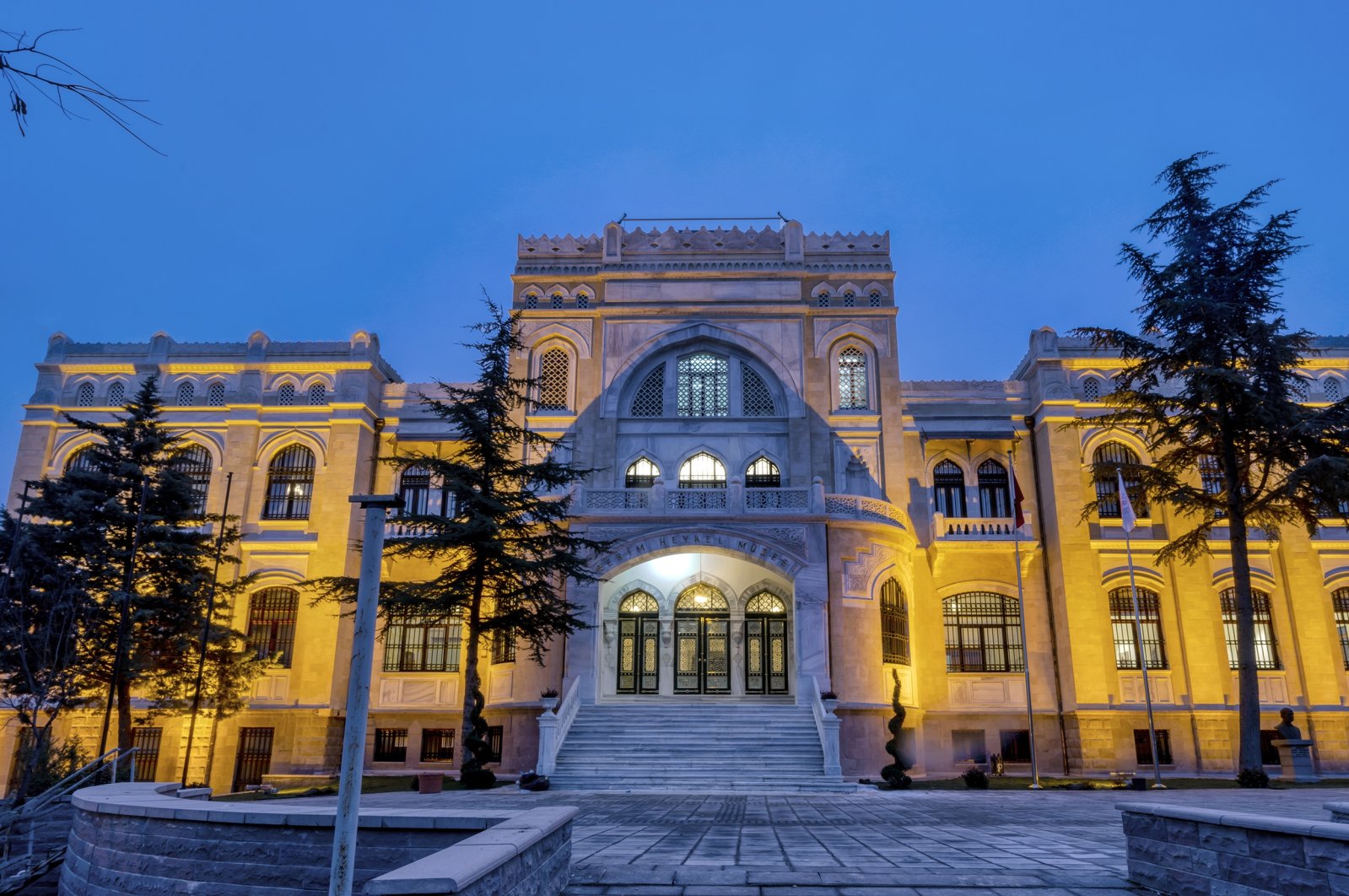 A general view from the Ankara State Art and Sculpture Museum in Turkish capital. (Courtesy of Ministry of Culture an Tourism)
by DAILY SABAH Dec 27, 2020 1:34 pm

The Ankara State Art and Sculpture Museum, home to some of the most valuable works of Turkish art history, will reopen following its restoration with a ceremony which President Recep Tayyip Erdoğan is set to attend tomorrow.

In December 2019, the Ministry of Culture and Tourism launched the extensive restoration project on the historical building and the artifacts it houses, including one of the most magnificent structures from the 1st National Architecture Era. Meticulous repairs carried out by ministry experts with contributions from academics from various universities have revealed the beauty of the structure built between 1927 and 1930 as the headquarters of the Türk Ocakları (Turkish Hearths). The building was reinforced against earthquakes and its original details restored using traditional techniques.

Since the 1980s, the museum has housed the rarest pieces of Turkish art history but its corporate identity and technical infrastructure have now been restructured to reflect contemporary museology. The museum collection has been extensively archived with detailed information on the works being digitized and recorded. Following the analysis and inventory, some pieces and their frames were restored.

During the restorations, the works of art were undamaged thanks to a high-tech, fireproof new generation smart storage system. An advanced camera and alarm system were also installed to constantly monitor artifacts.

A new display, consisting of 240 priceless paintings by leading artists, has been restored to go on display at the museum, which is considered a national treasure for its preservation of the last 150 years of Turkish art history. The new display is made up of works by Osman Hamdi Bey, Şeker Ahmet Pasha, Ibrahim Çallı and Bedri Rahmi Eyüpoğlu, among others and was curated by Professor Kıymet Giray. Giray also prepared a book titled "Başyapıtlar" ("Masterpieces"), chronicling the stories behind pieces on display as well as the history of the museum.

Now that the renovation is complete, the museum is poised to become a center for both national and international art events. The museum will offer art history programs, seminars and meetings with artists to boost the cultural development of Turkish painting and sculpture, while workshops will be held to attract young people and children. The museum, a cultural center where the first opera and theater play were staged during the Republican Era, will host events for art lovers in its concert hall that seats 400.

The museum's inauguration program includes a special performance of Mustafa Kemal Atatürk's favorite songs, who was the founder of the modern Republic of Turkey. The event, which will be held at the museum's magnificent concert hall, will commemorate the 101st anniversary of Atatürk's arrival in Ankara on Dec. 27, 1919, during the Turkish War of Independence.

A temporary exhibition called "Zamansız Izler" ("Timeless Traces") was prepared as a tribute to Turkish artists as part of the reopening of the Ankara State Art and Sculpture Museum. The exhibition highlights the history of the iconic building that forms the silhouette of Ankara at the heart of the city, tells the story of its transformation into a museum and recognizes the great artists and statespeople who contributed to it. The exhibition will be open until Dec. 2021.

All art lovers and artists can find something to relate to in "Timeless Traces," which is a reflection of recent Turkish history.

History of a landmark

The Ankara State Art and Sculpture Museum building was built between 1927 and 1930 as the headquarters of Turkish Hearths. A competition was held in 1926 to build the museum, with the project designed by architect Arif Hikmet Koyunoğlu, who also designed the Ethnographic Museum on the Namazgah Hill at the instruction of Atatürk, taking first place. This marked the beginning of the construction of the museum.

When referring to the museum's Turkish Hall, which heavily features the work of Koyunoğlu, Atatürk once said: "I do not want to leave this place. I thank those hands that decorated it." The Ankara State Art and Sculpture Museum, which boasts a spectacular concert hall, decorated with traditional motifs, is home to priceless artifacts exhibited with modern methods. Many important benchmarks in Turkish history took place at the site including, "Atatürk's Address to Turkish Youth," which was first read out at the building in 1927 and the first Turkish Language Congress under the presidency of Atatürk in 1933. "Özsoy," the first Turkish Opera, was performed for the first time at the magnificent concert hall in 1934.

The building was officially allocated to the Directorate General of Fine Arts of the Ministry of Culture and Tourism in December 1975 to be used as a museum of painting and sculpture. At the time, the museum was restored according to architect Abdurrahman Hancı's vision under the supervision of architect Koyunoğlu following its original design and new purpose. On Apr. 2, 1980, it opened as a museum with a ceremony. The museum brought new color to Ankara's cultural and artistic scene, invigorating it through events like the Asian-European Art Biennial, national and international exhibitions, various symposiums, meetings, conferences and concerts.

In 1976, the museum building was taken over from the Ministry of National Education along with four valuable paintings – Osman Hamdi Bey's "Silah Taciri" ("Gun Salesman"), Vasily Vereshchagin’s "The Doors of Timur" (Tamerlane), Fausto Zonaro’s "Portrait of a Young Girl" and Emel Cimcoz’s "Türk Çocuğunun Atatürk’e Şükranı ("Turkish Child's Gratitude to Atatürk"), which were recorded as the first pieces in the museum.

With a total of 3,629 pieces in its inventory, the Ankara State Art and Sculpture Museum collection takes visitors on a journey through the changing of artistic understandings and the impact of major historical events on Turkey's visual arts from the end of the 19th century to the present day.

The collection is one of the most important archives of Turkey's artistic history spanning over a century and was created using works recognized at State Art and Sculpture exhibitions as well as transfers, purchases and donations from public institutions and organizations. The collection consists of paintings, sculptures, ceramics, original prints, Turkish decorative artworks and photographs.