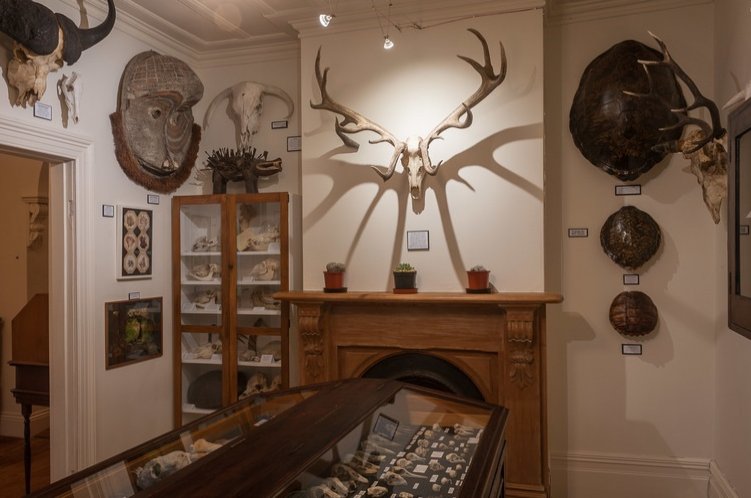 New Zealand artist Bruce Mahalski always wanted to work in a museum, but when that didn’t work out, he opened one himself.
The Museum of Natural Mystery, housed in his villa in the South Island city of Dunedin, displays a gallery of curiosities, thanks to his lifelong passion for collecting zoological, biological and ethnological artifacts.
The skulls and bones are drawn from more than 300 species, many of which he has turned into intricate bone sculptures.
Most of the materials for Mahalski's art are sourced from the collecting trips he takes, to the beach, to forests and paddocks. Others come from animals found squashed on the side of the road.
The artist, who has a science degree and is able to recognize most bones at a glance, made his first foray into bone art in 2005, when he made a "bone gun" for an anti-war exhibition. He covered cheap plastic machine guns with hundreds of tiny animal bones to protest against children's war toys and the escalation of the so-called war on terror.
Ever since, he has specialized in working with bones. Inspired by old Victorian-era displays, Mahalski arranges the bones of animals including rabbits, possums, chickens and seals, and fish fins, to create striking creatures or textural bone surfaces.
He uses the bones like paint and works in layers. He starts with undercoats and proceeds to delicate topcoats that involve tiny bones or bone dust.
Other highlights in the four-room museum include the jaw of an extinct cave bear and an old painting that was created in a local mental hospital in the 1920s by a famous New Zealand murderer.
Then there's a clay sculpture which was allegedly damaged by a poltergeist in a Wellington art school and a cow's skull with a horn growing out of the middle of its head like a rhinoceros.
“I think everyone should start up a museum in their house,” he says. “All you need to do is to put some labels on things and open the door to people.”
While objects like skulls tell their own story, even a simple dinner plate can be very interesting, he says. “I have one which is supposed to have belonged to John Clark, the last man in England hung for stealing sheep in 1830. It might not really have belonged to him, but I think it did and anyway, it’s an interesting story and I like telling stories.”
While many see bones as ghoulish, Mahalski sees them as “very beautiful and pure.”
“You can't improve on a skull,” he says. “They're so perfect.” For him, bones are not symbols of death but enduring reminders of life.
Among the miscellany of mystery, there are also some human bones. “I don't go out of my way to collect human bones, but I have been given quite a few over the years by friends of mine who are doctors. All of them are old medical specimens that were used for teaching."
“I try to be very careful about the way I display human bones in the museum because some cultures, such as the New Zealand Maori, firmly believe that the human spirit still has a connection with its bodily remains after death.”
But to him, a gorilla or a lion skull is far more interesting and special than a human one.
“While I respect other cultures' beliefs, I personally believe that humans are animals, and very common ones at that.”
He says that many ethical considerations go into collecting and making art with bones. "I try to be as respectful as I can and not alter them in any way by painting on them or carving them," he explains.
Much of Mahalski’s work is connected with the idea that humans are an integral part of the natural world and have no right to claim a special, separate status.
"It is our current disconnectedness from nature that is at the heart of so many of our current problems as a species," he says.
By incorporating human bones, he says, he is trying to break down the "invisible barrier between being an animal and being human."
"We are all animals," he adds.
People who can’t get enough of the museum during its opening hours can stay overnight in a room at the back. Mahalski says that he’s only had good feedback so far, and no one has reported any ghosts of humans or animals.