Books, syllabuses, ijazah: A look into the educational system in Ottoman madrassas 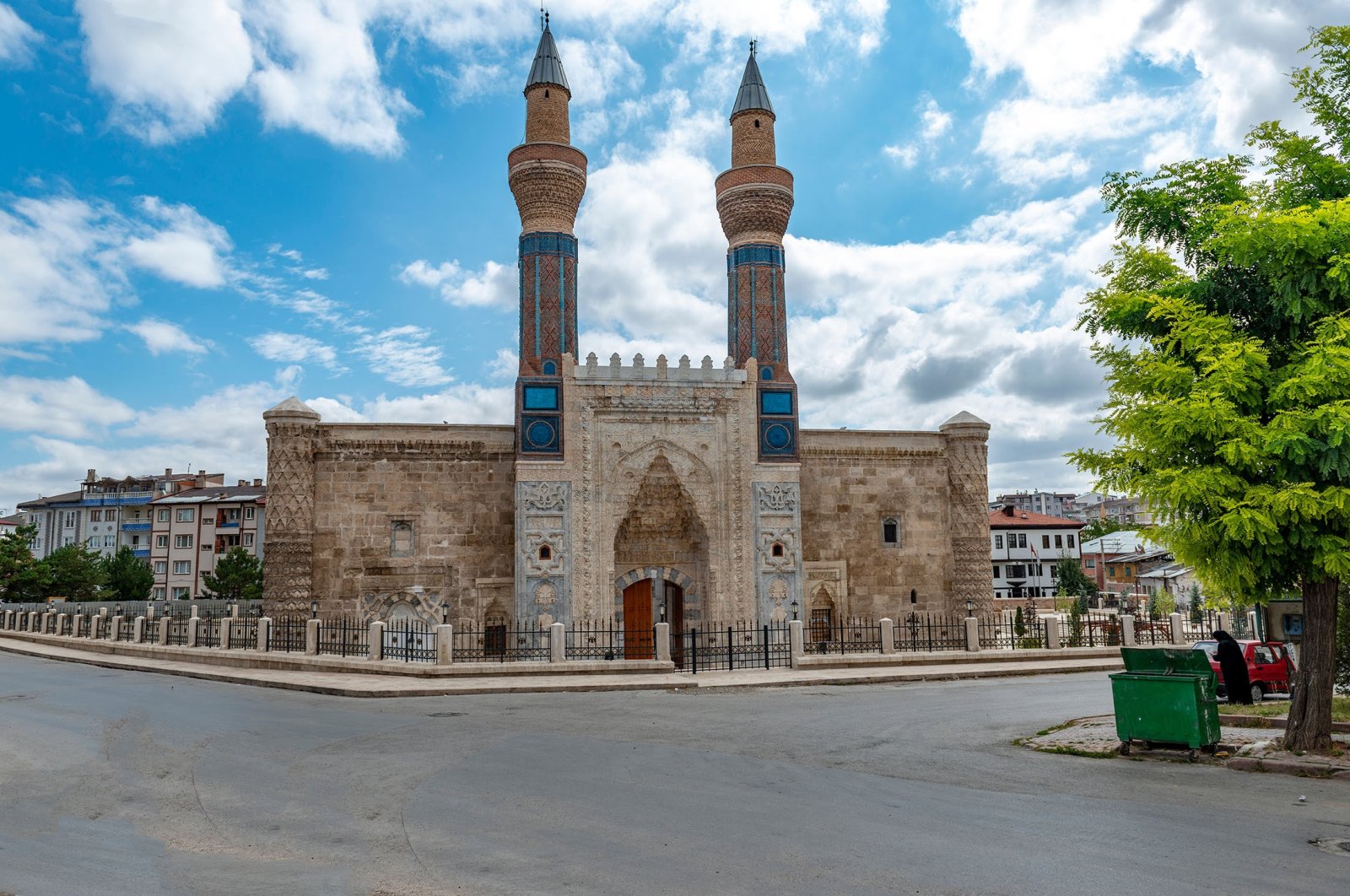 Gökmedrese in central Sivas province is one of the most prominent madrasas in Turkey. (Shutterstock Photo)
by ALİ TÜFEKÇİ Dec 02, 2020 2:22 pm

Did you know what Ottoman madrassas taught their students? Or what kinds of books the students studied at their desks? Which subjects were emphasized in their curriculum? Here is a guide to the madrassa educational system

One of the most important elements of Islamic culture and civilization was its universities called “madrassas” – institutions that kept the empire afloat for centuries and shaped its structure. They are, so to speak, the arsenals of Islamic culture and civilization. Madrassas trained the ruling elite in addition to educating students in the areas of religion, law, medicine and astronomy among other subjects over the centuries of Ottoman rule. Every famous scientist, artist and statesperson in the pre-dominantly Muslim countries was educated in the madrassa system well into the 20th century.

Researchers call the Nizamiyyah madrassas the institutions of the “Islamic Renaissance,” founded by Persian scholar and grand vizier of the Seljuk Empire Abu Ali Hasan ibn Ali Tusi, better known as Nizam al-Mulk, in the 11th century. These madrassas were among the first well-organized institutions of higher education in the Islamic world, with the quality of education being so superior they were renown in Europe. Although the Mongol invasion destroyed the madrassas' accumulation of knowledge and crippled it seriously, the Ottomans sustained the system pursued in the Nizamiyyah madrassas.

In the 14th and 15th centuries, scholars who traveled from Anatolia to attend the science centers of the East collected major works of Islamic cultural heritage and brought them back with them. These scholars were affiliated to the school of Persian polymath and Islamic scholar Fakhr al-Din al-Razi (1150-1210). Shams al-Din al-Fanari was the first representative of the school in the Ottoman Empire. Rumor has it that when al-Fanari died, he left behind a collection of 10,000 volumes of books.

After al-Fanari, the leading representatives of this school were Mullah Yegan, one of the famous scholars during the era of Sultan Mehmed II, also known as Mehmed the Conqueror, and Khidr Bey, Istanbul's first qadi – a Muslim judge who interprets and administers the Islamic jurisprudence.

Scholars did not teach according to a compulsory curriculum, making it difficult to categorically list the books taught in Ottoman madrassas each century. The professors directly determined the principles of education and taught reference books in their area of expertise. The professors would issue an “ijazah,” or license, to transmit certain knowledge given by one who already has the authority to students once they reached a certain level.

These ijazahs written by professors included information about what books the student had read, in which branches of science he had acquired knowledge and which courses he could teach, as well as the names of previous recipients of ijazahs. Most of the ijazahs issued by the Ottoman madrassas reveal a chain of scholars going back to Fakhr al-Din al-Razi.

We must pursue several paths in order to work out which books molded the minds of the madrassa students, with history books and autobiographies providing some insight. Gelibolulu Mustafa Ali (1541-1600), an Ottoman historian who wrote reference books in various fields, is one of the sources who provided the first detailed list of books taught since the era of Sultan Mehmed the Conqueror. “Kevakib-i Seb’a” (“Seven Stars”), written by a committee headed by Mustafa Efendi, the then-Reis ül-Küttab (chief clerk, equivalent of modern-day foreign minister), is the first study to describe the books taught in detail. The book was prepared at the request of Marquis de Villeneuve, who was the French ambassador to Istanbul.

Another clue is the list of book foundations for establishing libraries in madrassas. The “tereke” (heritage) records, kept to determine the property holding of deceased teachers and students, also helps sheds more light. Literary historian professor Ismail Erünsal, who examined these records, published lists of the common books he identified.

Truth cannot be reached without method

Looking at the available evidence, particularly the autobiographies of Ottoman scholars, reveals that madrassa students would first read and memorize the Quran. Knowledge of Arabic and its literary arts was deemed an essential quality in an Ottoman intellectual, and it was believed learning the Quran helped lay this foundation.,

In a sense, Arabic was the common academic language of the Islamic world. The most commonly taught books in the madrassas were found to be Arabic grammar books and dictionaries. Scholars who had never even been to an Arab country had Arabic grammar books, like Muslim scholar and moralist Muhammad Birgivi. His books “Izhar” and “Avamil” were taught in madrassas for centuries because they provided an easier way to learn Arabic.

Apart from during his education, Birgivi never left the town of Birgi near İzmir in the Ottoman Empire where he worked as a scholar. However, the books he wrote in a variety of fields would travel the empire. His book “Vasiyetname” was a bestselling religious book that captured not only students but the public as a whole.

The teaching of Arabic grammar books was followed by books on methodology in madrassas, as goals cannot be achieved without proper method. Books on astronomy, geometry and calculus were also taught to encourage methodological thinking.

Books on logic were essential for the students’ methodological thinking skills. Syriac philosopher Porphyry's book, “Isagoge” (“Introduction”), the standard textbook on philosophy throughout the Middle Ages with Latin and Arabic translations, was one of them.

Through education, madrassas created an infrastructure for literary, legal, historical and social knowledge that formed the basis of Islamic culture and civilization. Everyone, from sultans to statesmen and travelers to the literati, was educated under this system.

Teaching one of the significant reference books to a student was deemed sufficient enough for the individual to graduate, after which the student would improve themself in the field in which they intended to specialize. If the student was ever to face an issue, they knew where to find the relevant information.

Professor Erünsal found two primary books in intellectuals' "tereke” records. The first was Islamic jurist Ibrahim al-Halabi’s most famous work, “Multaqa al-Abḥur” ("Confluence of the Seas"), written in 1517. The work is a condensation of a number of earlier standard compilations of the Hanafi jurisdictional sect. Referring to the influence of the book, diplomat and writer James Lewis Farley said: "The sultan rules the Turks, and the Quran and Multaqa rule the sultan.” The other, “Dürer’ül-Hükkam” (“Pearls from Provisions”), on the topic of Islamic law was written by Mullah Hüsrev, the mentor of Sultan Mehmed the Conqueror.

Madrassas primarily taught divans, a collection of poems by one author, in terms of literary works. Literature was a space for students to rest amid deep and exhausting readings. During breaks between classes and in the evenings, students discussed literature and even had poetry competitions.

In these competitions, one student reads a couplet selected at random from a poetry book. The other competing student reads another piece that begins with the last letter of the previous student’s poem. In this way, they tested their memorization skills through mutual readings. In the case of a draw, the poet must use the last syllable of his opponent's last word. It is said in some competitions thousands of couplets were recited.

According to records, the books of Persian poet Saadi Shirazi called “Bustan” (“The Orchard”) and “Gulistan” (“The Rose Garden”) were most commonly taught. The divan of poet Jami and “Mesnevi” (“Mathnawi”) of 13th-century Sufi mystic Mevlana Jalaluddin Rumi and their annotated texts are also among the most common literary works.