Calendars of the East and solstice festival Shab-e Yalda 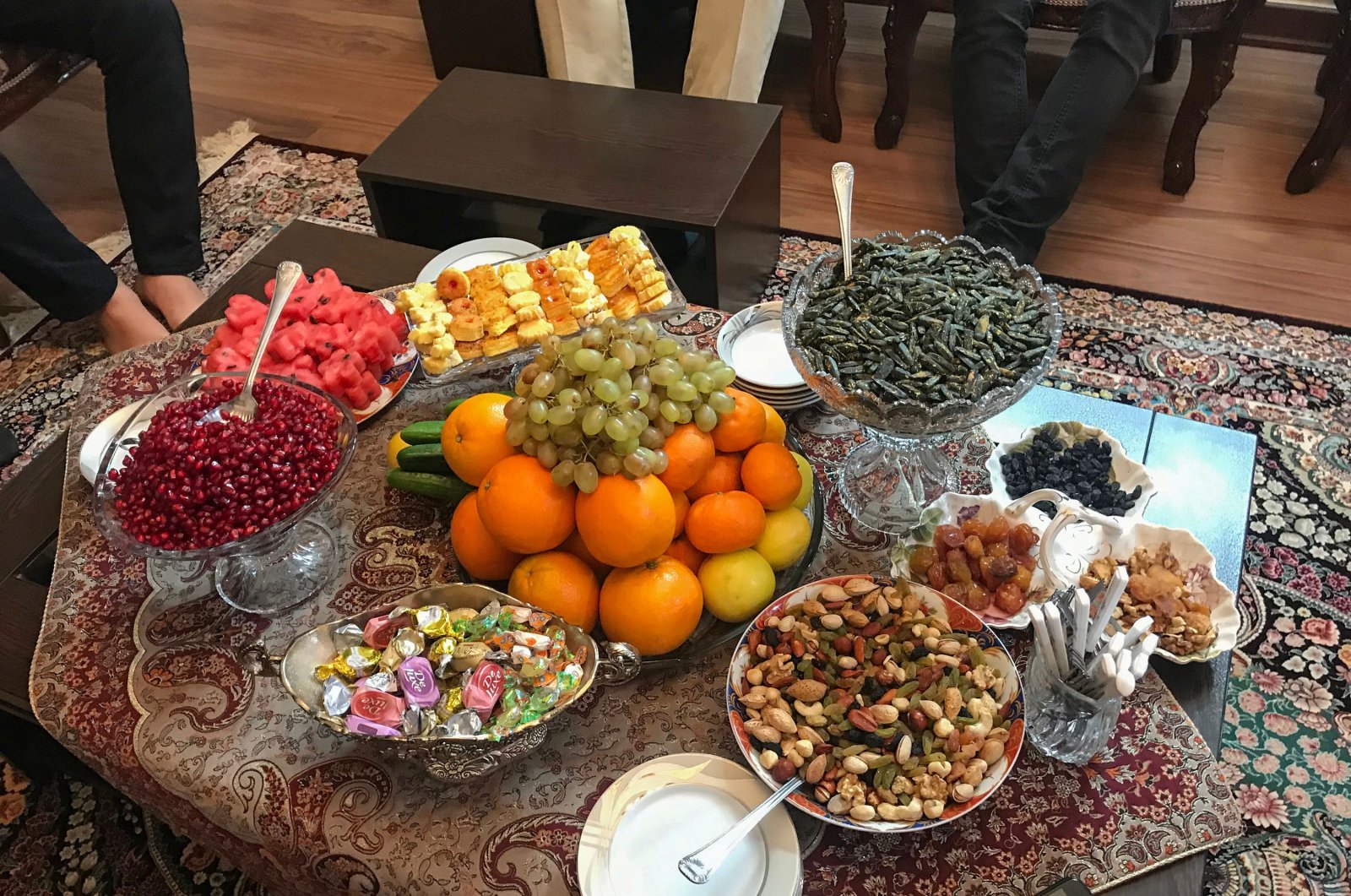 Freshly-dried fruits and nuts on offer on tables prepared for the Shab-e Yalda celebration
by ALİ TÜFEKÇİ Dec 24, 2020 2:52 pm

The Ottomans did not think highly of Christmas or New Year's Eve for, as you probably know, they had a completely different religious culture. The months of December and January had a distinct place for them, however, not because they pointed to the end of one year and the beginning of the other but because of their long nights. Nights, especially the longest nights of December, are one of the themes widely addressed in Eastern literature.

The Islamic world did not use the Gregorian calendar until the last century, but regulated life according to the Islamic calendar, also known as the Hijri calendar, which is based on the cycles of the moon. Given that ancient people followed various calendars simultaneously for purely pragmatic purposes, we cannot talk about a distinction and behavior based on religion in their use of calendars.

For instance, the Ottomans used the solar Gregorian calendar along with the Hijri calendar in a way so that they both have the same beginning date. Known as the Rumi calendar, this specific Ottoman calendar begins with March, the harbinger of spring, and ends with February, the last month of winter.

According to this calendar, December and January, corresponding to the 10th and 11th months in sequence, are called Kânûn-ı Evvel and Kânûn-ı Sânî, respectively. Kânûn is a word of Syriac origin meaning “fire furnace.”

People identify and name time elements according to their needs. This is true for their approach toward years, months and days. The beginning and end of the 24-hour day vary by nations and cultures based on how people spend it.

In ancient Egypt, for instance, the day began with a sunrise and ended with the next one. In the Eastern world, the day begins and ends with sunset. Therefore, nights are considered to belong to the next day. “Friday night or evening,” for instance, is the evening or night that starts with the sunset on Thursday.

In Western culture, on the other hand, days and nights start and end on the basis of hours. The spread of rail transportation in the world required a uniform time-keeping system. As a result, the time slot starting at 12 o’clock at night and ending at 12 o'clock the following night is called a calendar day. With globalization, this clock has been adopted in all areas of life.

Because life in Islamic culture is regulated according to worship, days, nights, months and years are adjusted according to the needs of the religion. So, the caliphs of Islam placed great importance on developing a calendar to facilitate the affairs of the people.

Starting from the Umayyads and Abbasids, the Islamic world trained astrologers called “müneccim” and calendar experts called “muwaqqit.” The Ottoman Empire also deployed officials who were formally engaged in this duty. They have offices called “Dar al-Muwaqqit” usually located on the grounds of large mosques. Renowned scholar Fuat Sezgin has numerous studies on the works of hundreds of scientists in this area.

Müneccims studied the movements of the sun, moon and stars and prepared various star atlases and measuring instruments accordingly. Their detections and interpretations were considered important in terms of determining the times of wars, navigating at sea and predicting natural disasters and seasonal movements.

Muwaqqits, on the other hand, dealt with assigning hours of worship during the day and year. For a one year period, they prepared time rulers with separate punctual accounts to match the locations of cities and the conditions of mountains and lowlands. These rulers, which were prepared by taking into account the length of days and nights, helped people have a better-regulated daily life.

The time period covering the six longest nights starting with Dec. 21 is called “Shab-e Yalda.” The word “night” is “shab” in Persian, “layl” in Arabic and “gece” in Turkish.

The longest nights of the year, corresponding to December, had a celebratory culture as well. In harvest season, people filled warehouses with excess yields to enjoy them during long winter nights. For them, summer was a period of preparation for winter, and winter was a season of storing motivation for the intensive work that began with the spring.

In cities and villages, private rooms, mosques and tekkes (khanqah), or large halls, of well-situated families were prepared for the enjoyment of these nights. Hot soups were cooked for guests, coffees were made to ensure wakefulness and dried fruits and nuts were laid on tables. All this was for sweet conversations and entertainment on history, literarature, religion and many other topics.

In Ottoman and Iranian territories, literary conversations full of poetry were a special part of these nights. They told tales and epics and read out poems. “One Thousand and One Nights” was a product of this culture. Sometimes, these conversations consisted of reading a book such as great Sufi philosopher Mevlana Jalaluddin Rumi's “Masnavi” or Persian poet Ferdowsi’s “Shahnameh,” and sometimes a special person would read out such books by heart.

The most famous couplet about the longest night, Shab-e Yalda, in classical Turkish literature belongs to 17th century poet Alaeddin Ali, nicknamed Sabit. He writes: “How could the astrologer and the time-setter know the winter solstice (the longest night)? / Ask the addict of sorrow how many hours there are in a night.”