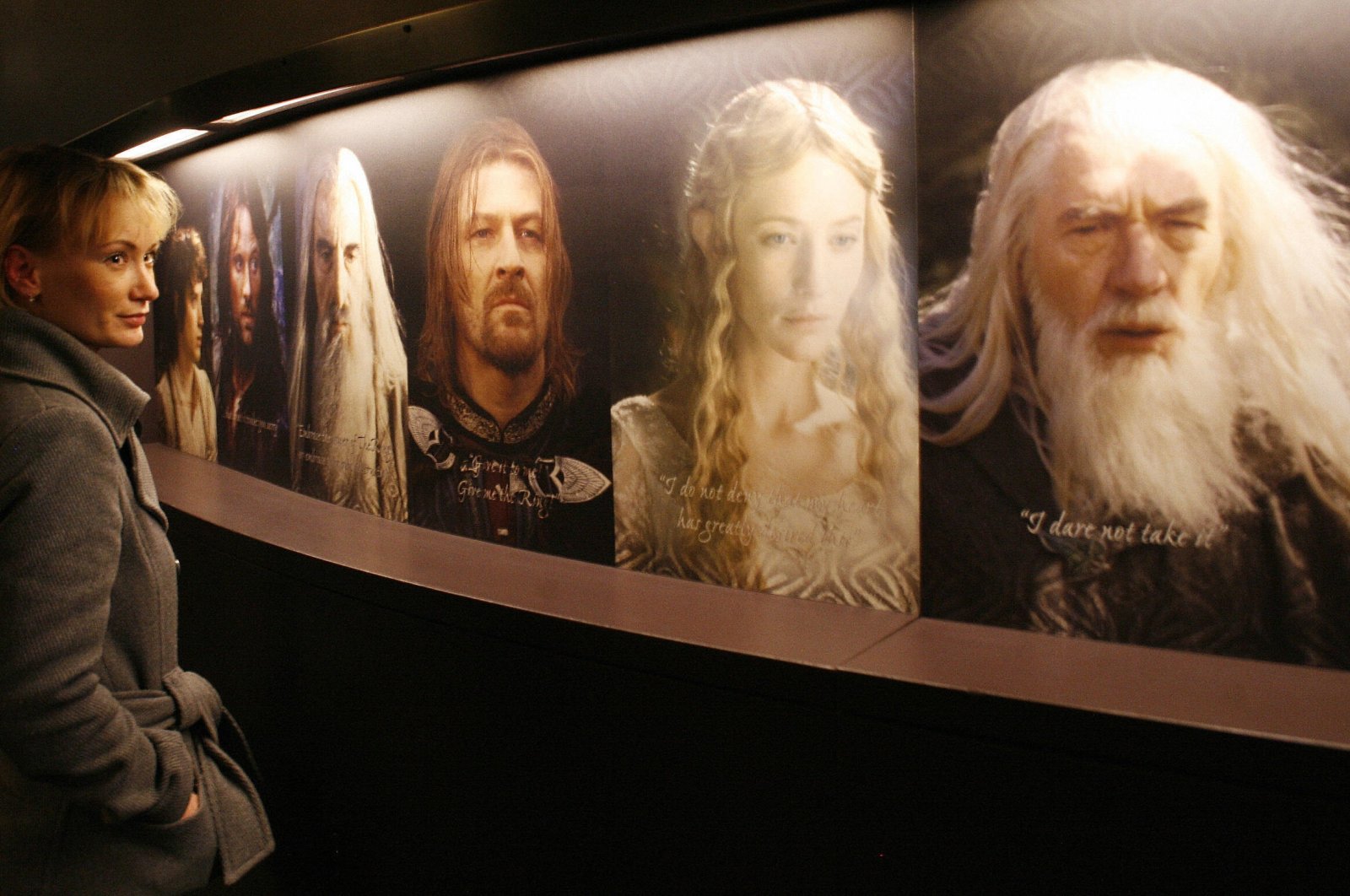 A woman looks at the different characters from "The Lord of the Rings" films, at an exhibition in Potsdam, eastern Germany, Jan. 30, 2007 . (MICHAEL URBAN/DDP/AFP via Getty Images)
by DAILY SABAH Jan 15, 2021 2:55 pm
RECOMMENDED

It has been almost 20 years since the first chapter of the iconic "The Lord of the Rings" trilogy, "The Fellowship of the Ring" was released in cinemas on Dec. 21, 2001. The trilogy of films, based on literary giant J.R.R. Tolkien's novels published in the 1950s, instantly became global phenomena, surpassing $2.9 billion in box office revenue. Now, two decades later, Amazon Studios is producing the world's most expensive TV series, set in "The Lord of the Rings" universe, and the show's synopsis has just been officially released.

Amazon, on its streaming service Prime Video, will welcome viewers back to the cozy lands of Middle-earth with its series titled “The Lord of the Rings,” after acquiring the TV rights to the franchise in 2017. The official synopsis for the show was released on Tuesday via “TheOneRing.net,” the largest online Lord of the Rings community.

The series “brings to screens for the very first time the heroic legends of the fabled Second Age of Middle-earth's history,” reads the official synopsis, as was previously confirmed by the show's official Twitter account on March 7, 2019. Former cinematic ventures into Middle-earth, namely "The Lord of the Rings" and "The Hobbit" trilogies, were set in the Third Age of the fictional universe.

The epic drama will take place thousands of years before the events of previous adaptations and “will take viewers back to an era in which great powers were forged, kingdoms rose to glory and fell to ruin, unlikely heroes were tested, hope hung by the finest of threads, and the greatest villain that ever flowed from Tolkien’s pen threatened to cover all the world in darkness.”

Amazon promises that the series will follow an ensemble cast of characters that are both familiar and new. Apart from the cast, the show will also feature familiar fantastical locations, such as the dark depths of the Misty Mountains, and will bring to screen for the first time the breathtaking island kingdom of Numenor. "(These) kingdoms and characters will carve out legacies that live on long after they are gone," the synopsis says.

Amazon bought the TV rights to "The Lord of the Rings" for $250 million and committed to producing five seasons with an estimated cost of at least $1 billion, making it the most expensive show in television, and streaming, history. The series has been in the works for the past four years, with Amazon officially confirming in September 2019 that the show would go into production in New Zealand, where the past cinematic iterations of Tolkien's books were also shot. The show's long-awaited production began a month later, in December, according to The Hollywood Reporter.

The studio employed Hollywood newcomers John D. Payne and Patrick McKay as showrunners for the epic series, and later they brought on board J.A. Bayona of "Jurassic World: Fallen Kingdom" to direct the first two episodes. In January 2020, the show's Twitter account released a series of tweets announcing the fellowship of actors that will star as Middle-earth's elves, dwarves and men, and maybe even Dark Lords.

Although there is still no release date for the highly anticipated series, the filming of the pilot episode has reportedly been completed, with director Bayona giving clues in that direction. The production was halted in March due to restrictions regarding the coronavirus pandemic. Deadline reported in September that the show restarted filming after the New Zealand government gave the green light to the resumption of productions in the country in May. Before the pandemic, Amazon Studios head Jennifer Salke had said that the hope was for the show to air in 2021.