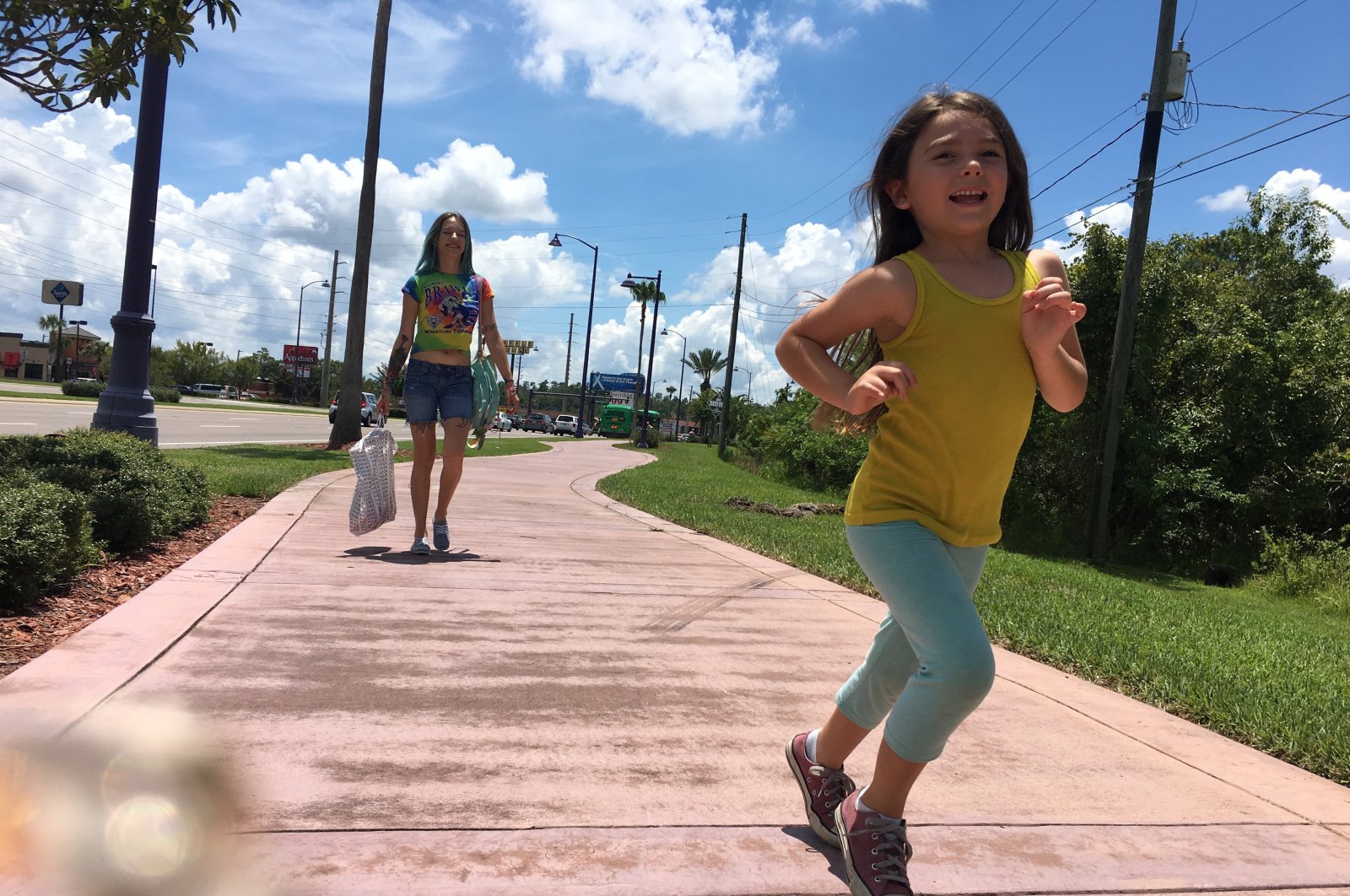 Brooklynn Prince as “Moonee” runs towards the camera as Bria Vinaite, playing her mother “Halley” in the movie, follows, in a still shot from “The Florida Project” directed by Sean Baker.(Archive Photo)
by Ahmet Koçak May 09, 2021 2:10 pm

'The Florida Project,' a heartbreaking movie of childhood, poverty and living in the shadow of Disney, remains one of the most underrated, undervalued gems of the last decade

It has been four years since Sean Baker's little film “The Florida Project” came out in 2017, and not one day passes by without me thinking “Why, wasn't this nominated for Best Picture?” With a warming, at times heartbreaking, and always charming story, the film shows how choices to emphasize the main theme can elevate a work to great levels.

In a successful film, all elements work in harmony with the theme, and they strengthen it. Cinematography, story, editing, direction, all strive for a successful depiction of the theme. Such is the case in "The Florida Project" with the theme's fingerprints traceable in every part of the film, most glaringly in Baker's staging, blocking and camera positioning where they come to the forefront.

"The Florida Project" is a film based on childhood, dealing with the notion and its issues that manifest themselves in children and adults alike. Simply put, it believes no matter how difficult, ruined, poverty-stricken the life of their mothers and fathers are, children are still children.

According to the film, children view the whole world from that reckless framework of innocence that is reserved only for them; they can find happiness even in the swamp, in the dump. The world may not care, the consequences of their actions may not mean anything to them, but that reckless innocence deserves to be preserved in childhood.

The continuation of that theme is simple as well. Adults can't, shouldn't, be children. The same virtue that deserves protection in childhood must evolve with the mental and physical growth of the person because in adulthood responsibility takes the place as the most important virtue, and responsibility does not have the luxury of recklessness.

This is the dichotomy of innocence and responsibility. The different identities of childhood and adulthood make "The Florida Project" a joy to watch. The film deals with this theme with a little girl and a young mother, played brilliantly by Brooklyn Prince and Bria Vinaite respectively, both of whom are acting for the first time.

The main character of the movie is Prince's Moonee. Director Sean Baker literally lowers the camera into Moonee's perspective to show the world through the child's eyes. It pushes adults into the background as a child would.

The camera craft in the film is beyond impressive as director Sean Baker literally lowers the camera into children's perspective to show the world through their eyes. It pushes adults into the background like a child would.

The camera mostly centers on children's faces with the adults out of focus above the waist, their voices are heard, but they remain like background music for the children's movements.

The movie wants to show that the innocence we speak of is common, using many of the children's characters. Although all of the children belong to families with different races, characteristics and traditions, they all live the same childhood.

They are all equally reckless and likewise curious and joy-seeking human beings chasing games at all times. No matter how dark it gets, there is a light in the children's eyes, a light that can only exist in a child's eyes. The important thing for them is to have as much fun as they can.

After all, even when Prince's Moonee comes face to face with darkness, there is a solution provided by that innocence; running away and being with her friend. She doesn't want to look at the dark; she just wants to be happy.

The supporting theme of the movie is based on Vinaite's mother character. The mother is one who does not yet have the sense of responsibility that is a requirement of her adulthood, who has a child callousness and wants to have fun constantly. This childish nature sinks her deeper and deeper every day.

Her best friend is a character who is as young as she is, who wants to have as much fun as she is, but also can carry the burden of her duties as a mother. The character of the always great Willem Dafoe's Bobby, who is the manager of the project, is perhaps the best mother model though he is not a mother.

Like a mother, he tries to protect children and approaches children with compassion – and even the character of Anne, whom we can call a child. All the characters represent a point from the childhood and adulthood spectrum. This richness of character offers the opportunity to look at the film's theme from different perspectives.

As the camera follows the children, the collapse of a family and the lives of the lower class of the society are presented to us albeit out of focus, which strangely enough puts it, and the children, more on emphasis.

The film reveals a world colored by poverty, responsibility, suffering and humanity through the adult characters. Everyone has a different challenge in their lives, everyone is trying to survive. Everyone is face to face every day with the darkness that the child does not want to look at, but also has humanity for good and bad.

It offers a grounded and realistic portrayal of poverty. It's hard to come across a realistic depiction of poverty in Hollywood movies. Those who deal with poverty often romanticize it and portray it as a virtue, or, on the contrary, romanticize wealth and present poverty as a defect to be rid of.

In fact, it is not possible to classify the notions of richness or poverty with attributes such as evil or virtue and turn them into a single adjective. Of course, these social statuses have a good or bad effect on moral virtues, but these influences do not indicate that the status itself is good or bad.

"The Florida Project" does not center on the status of poverty or wealth, but it does not claim either that these statuses are not a factor in the lives of the characters. The film focuses on the choices the characters make in line with their morals and the situations they are in. Thus, it tries to show that the effects of poverty and wealth are personal, not general.

The fact that no character in the film is completely positive or negative points out that an entire social status is too complex to be edited into a single and simple identity. This perspective makes the movie's characters feel like they are people who came out of life, and thus the movie portrays a much more realistic portrait.

"The Florida Project" also makes a serious effort with its technical aspects in order to present its theme in the most effective and realistic way possible. The movie takes place in one of the residential areas called “projects.” These motels are homes for homeless people. Places where they pay a weekly room fee. Real locations in Florida were used for the movie, including the motel.

The projects they used, a symbol of poverty, are neighbors with Disneyland, a symbol of wealth, revealing a tragic irony. From this point of view, the location preferences seriously increase the depth of the film's message.

The setting of the movie in the summer also gives a different warmth, sincerity and life to the color palette. Vibrant colors of nature and of colorful structures and clothes, all amplified with the season bring a unique look to the film.

The way music is integrated into the movie is also interesting. The music is not artificially added, except for one particular scene; The source of music in a scene is always items such as a phone, speaker, or television that are in a place where the characters - and, therefore, the audience - can hear.

Without compromising realism, the film pushes music to the background and keeps the sound quality at par with reality. This technique allows the audience to focus on the visual elements of the scene so that it uses music to give the character a feel or reveal a feeling of the character rather than dictating a feeling to the audience.

"The Florida Project" is a cheerful, happy, funny and at the same time sad story. It is a story that, at its center, addresses a part of the society that is rarely the focus of movies and appeals to everyone.

It is a movie that creates the impression that it is real. That is not just down to the fact that they use real locations but also the feeling it provides with its superb story, characters and filmmaking.

John Truby, an American screenwriter who has served as a consultant on over 1,000 film scripts, says in “The Anatomy of Story” that a good story is a set of actions with moral meanings and implications, designed to express a larger theme.

"The Florida Project" is childish and mature, and is a good story, and more importantly a good movie that deserves to be watched.