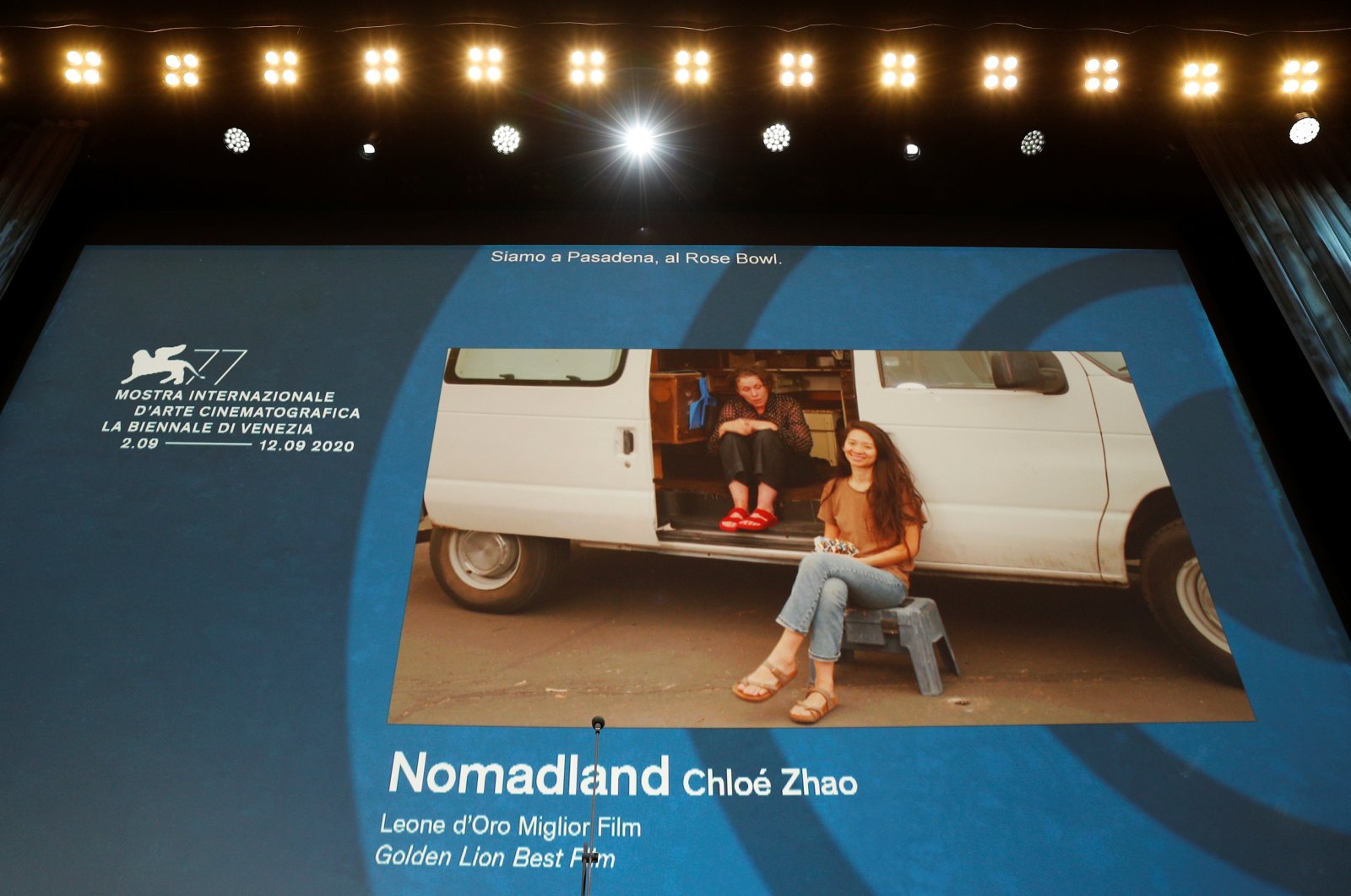 Chloe Zhao’s "Nomadland,” a recession-era road trip drama starring Frances McDormand, won the Golden Lion, the highest award for the best film Saturday at the Venice Film Festival, held against the backdrop of the coronavirus pandemic.

Zhao and McDormand appeared by video from the United States to accept the award, given virus-related travel restrictions made reaching the Lido difficult if not impossible for many Hollywood filmmakers and actors.

A favorite going into the awards season, "Nomadland" is screening at all the major fall film festivals in a pandemic-forged alliance involving the Venice, Toronto, New York and Telluride festivals.

Italy’s Pierfrancesco Fabino won the best lead actor for "Padrenostro,” (Our Father), an Italian coming-of-age story that takes place against the backdrop of a terrorist attack in the 1970s. Britain’s Vanessa Kirby won best lead actress for "Pieces of a Woman,” a harrowing drama about the emotional fallout on a couple after their baby dies during a home birth.

The Russian film "Dear Comrades!” about a 1960s era massacre in the former Soviet Union, won a special jury prize while Chaitanya Tamhane won the best screenplay for "The Disciple,” about an Indian man’s pursuit to be a classical vocalist.

That the 10-day Venice festival took place at all was something of a miracle, given that northern Italy in late February became ground zero for Europe’s coronavirus outbreak. The Cannes Film Festival was canceled and other big international festivals in Toronto and New York opted to go mostly online.

But after Italy managed to tame its infections with a strict 10-week lockdown, Venice decided to go ahead, albeit under safety protocols that would have previously been unthinkable for a festival that has prided itself on spectacular visuals and glamorous clientele.

Face masks were required indoors and out. Reservations for all were required in advance, with theater capacity set at less than half. The public was barred from the red carpet and paparazzi, who would normally chase after stars in rented boats, were given socially distanced positions on land.

While it’s too soon to say if the measures worked, there were no immediate reports of infections among festival-goers and compliance with mask mandates and social distancing appeared to be high.

"We were a little bit worried at the beginning, of course,” said festival director Alberto Barbera. "We knew that we had a very strict plan of safety measures and we were pretty sure about that, but you never know.”

Hong Kong director Ann Hui almost didn’t make it after she couldn’t get on her flight because of virus border restrictions. In the end, she arrived to collect her Golden Lion Lifetime Achievement Award and to see her out-of-competition film "Love After Love” make its world premiere.

"It’s a moment of rebirth for everyone, for the whole world,” said Emma Dante, the Italian director of the in-competition film "The Macaluso Sisters.” "This festival is really an important moment of encounter, of beginning to dream again and be together again, even with the norms and following all the safety protocols.”

Film writer Emma Jones said aside from "a few teething problems” with the online reservation system, the festival went off better than she expected.

"It feels safe in there, it feels socially distanced,” she said of the venues.

Jones noted that the lineup of films lacked the usual Hollywood blockbusters – think "La La Land,” and "The Shape of Water” – that have used Venice as a springboard to Oscar fame. While the festival featured films from Iran, India, Australia and beyond, it was heavily European.

"This is a COVID festival. There’s no use pretending anything else,” Jones said.

But she added: "It would feel really off-note, I think, to have had a red carpet with screaming fans and celebrities walking down it and people talking about who wore what. Twenty-twenty is not the year for those kind of discussions.”

Instead, she said, Venice focused on the integrity of the films and the diversity of the countries represented.

"We were lucky to receive a lot of submissions from all over the world and apart from a few missing titles from the Hollywood major film studios, most of the countries are represented in Venice and the quality of the lineup is really very high,” said festival director Barbera.