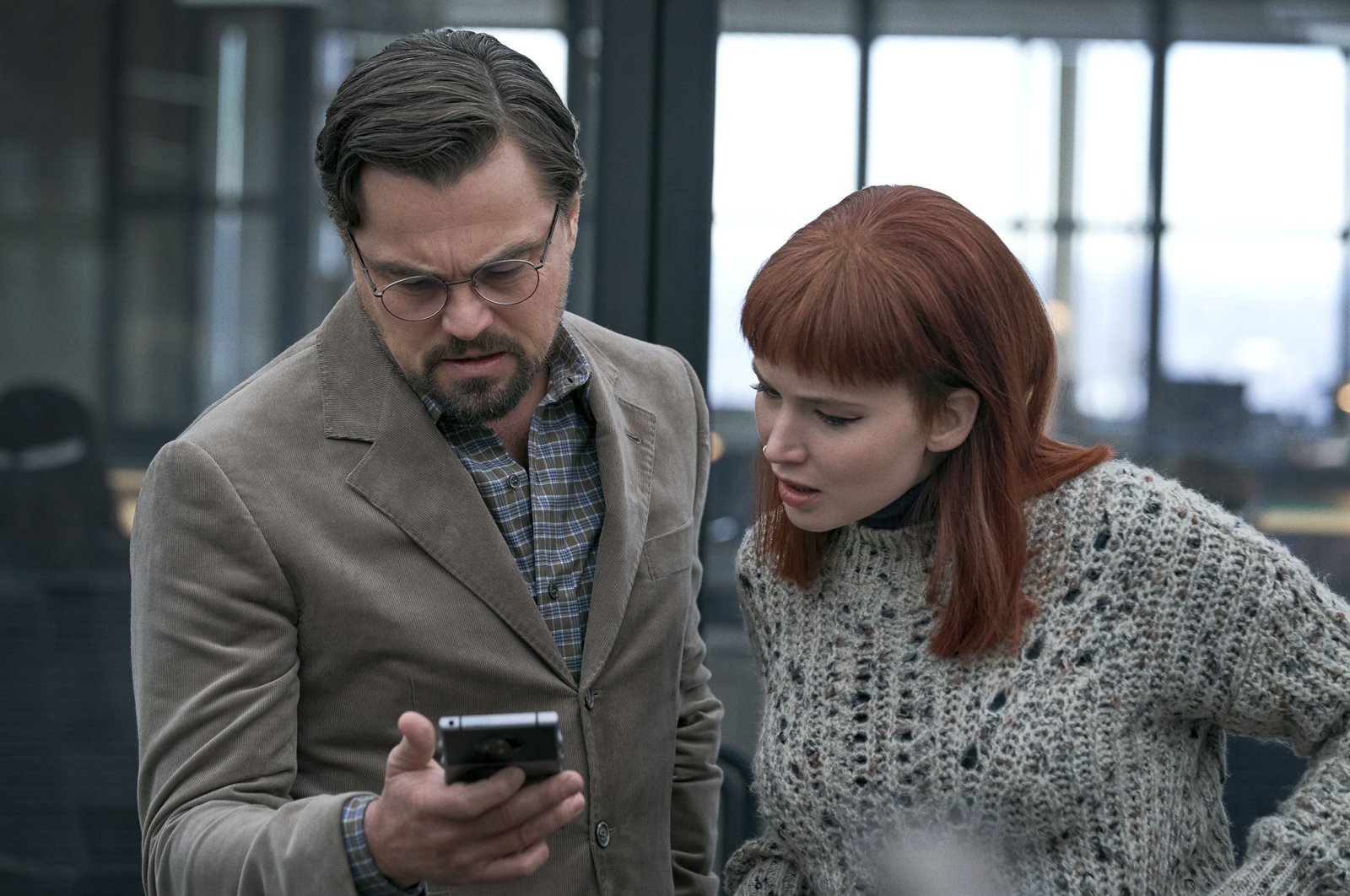 Leonardo DiCaprio (L) as Dr. Randall Mindy and Jennifer Lawrence as Kate Dibiasky, in a scene from the film “Don't Look Up.” (Netflix via AP)
by French Press Agency - AFP Dec 17, 2021 7:13 pm
RECOMMENDED

Scientists seem to have gone from being one of the most respected people to walk on Earth to being lower on the social pecking order than flat Earth conspiracy theorists, and for Hollywood A-list stars Leonardo DiCaprio and Jennifer Lawrence that needs to change. Their latest film – an end-of-the-world comedy – aims to send a little respect back to scientists.

In “Don't Look Up,” slated for release on Dec. 24 on Netflix, they play two astronomers who discover a comet will wipe out life on Earth within six months, but then try in vain to get politicians and the media to take the threat seriously.

The parallels with the climate crisis were deliberate, and filming during the pandemic gave the film another level of relevance.

“We are so immensely distracted from the truth nowadays and then COVID-19 hit and a whole new scientific argument happened there,” DiCaprio said in a recent press conference.

The film marks Lawrence's return to the big screen after a couple of years away from the spotlight.

The “Hunger Games” star recently told Vanity Fair she felt people had “gotten sick of me” following a string of box office disappointments, and wanted to build a real life, not least after a near-death experience when her private plane crashed.

She was lured back by her love for “Don't Look Up” director Adam McKay and the message of the film.

“It's so sad and frustrating to watch people who have dedicated their lives to learning the truth be turned away because people don't like what the truth has to say,” said Lawrence.

In the movie, the astronomers face a particularly tough time trying to convince the power-obsessed United States president, played with narcissistic glee by Meryl Streep.

Streep was coy about the real-life inspiration for her role.

“There were so many places to take things from, because there are so many preposterous people who put themselves in public life, shamelessly,” she said.

The press conference was hosted by Amy Mainzer, the real-life astronomer who provided the basis for Lawrence's character.

She said it was “very cathartic” watching DiCaprio's impassioned rant in the film against the stupidity of ignoring scientific warnings.

“We had a screening with other scientists in LA and they were cheering. It was really something to behold,” Mainzer said.

'I would be tweeting'

Jonah Hill, who plays the obnoxious son and chief-of-staff to Streep's president, struck a light note at the press conference.

Asked what he would do if the world was coming to an end, Hill dead-panned: “I think I would be tweeting. Letting people know the cool thoughts that I had to say, and opinions about different stuff like movies and how stars live their lives and who they're dating.

“And I think people in their last moments would want to read that.”

Lawrence, laughing, agreed, “I would die commenting on TikTok.”

McKay has pivoted from out-and-out comedies like “Anchorman” and “Step Brothers” to more political fare with films about the financial crisis –“The Big Short” – and former Vice President Dick Cheney – “Vice.”

“We wanted to deal with this subject – the climate crisis – that is arguably the greatest threat to life in the history of mankind, and that can be almost like an animal attacking you, it can be overwhelming,” McKay said.

“But if you're able to laugh, that means you have some distance, that's important. You can feel urgency and sadness and loss while also having a sense of humor.”

That approach helped hook in DiCaprio, who has been a passionate campaigner on climate issues for years.

“I'd been looking for a movie about this subject for decades. This is an issue where everyone is looking for what kind of difference they can make. Adam really cracked the code,” DiCaprio said.

“It's the most important issue that any of us could be talking about on a regular basis.”