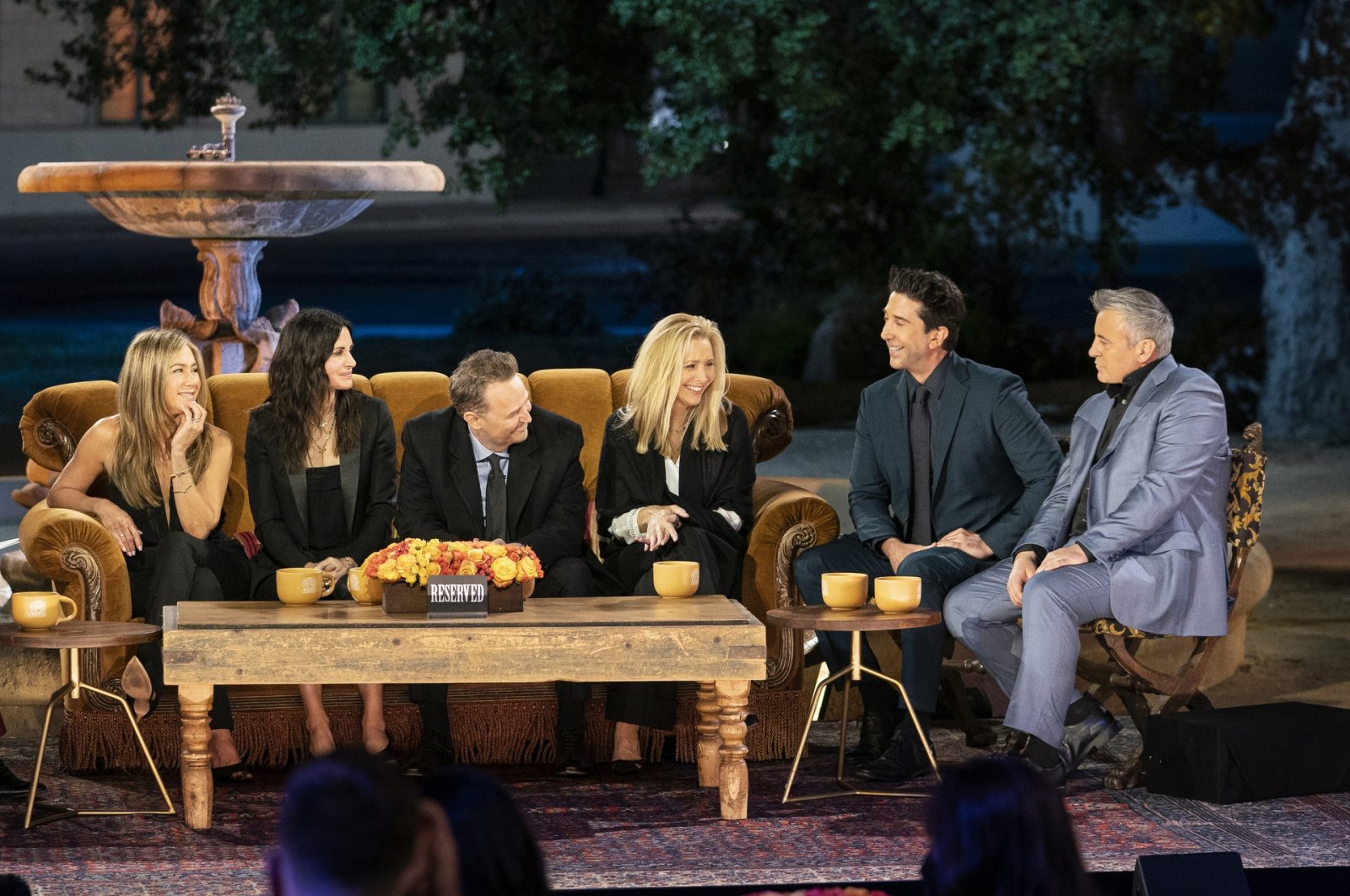 From the left Jennifer Aniston, Courteney Cox, Matthew Perry, Lisa Kudrow, David Schwimmer and Matt LeBlanc sit around the famous sofa from the television series "Friends" during the reunion special, with the water fountain from the show's intro in the background. (HBO Max via AP)
by Reuters May 27, 2021 1:49 pm
RECOMMENDED

What would the lives of Chandler, Monica, Ross, Rachel, Phoebe and Joey look like today, after more than a decade, if one could imagine such a scenario? Would they still be friends? Who was "Smelly Cat"? Most important of all, were Ross and Rachel on a break? Well, these are some of the questions that the highly anticipated "Friends" reunion had in store for audiences on HBO Max as it premiered on Thursday, promising an emotional journey down memory lane to revisit one of television's most famous, most popular and most enjoyed series the world over.

"Friends: The Reunion" brings stars Jennifer Aniston, Courteney Cox, Lisa Kudrow, David Schwimmer, Matthew Perry and Matt LeBlanc back to the set for a tearful get-together 17 years after the final episode of the show about the lives of 20-somethings in New York.

A slew of guest stars ranging from Justin Bieber to Lady Gaga and football superstar David Beckham join in for the 105-minute special, hosted by James Corden, on HBO Max. The show features bloopers, a trivia quiz, reminiscences from the show's creators and some surprises.

A reboot of the series itself, or a movie, is not planned. All six actors are now in their 50s.

"They ended the show very nicely," said Kudrow, referring to the 2004 finale when the characters moved out of their Greenwich Village apartments for new adult lives. "I don't want anyone's happy ending to be unraveled."

"It was life changing, and it forever will be. Not just for us but for the people who watch it, and that's such a great feeling to carry forever," said Cox.

"Friends," which began in 1994, was the top-rated comedy in the United States for six years and aired in more than 200 nations. The finale was watched by some 52 million Americans, 8 million more viewers than for the Oscar ceremony that year.

K-pop band BTS said they improved their English by watching it, Beckham says the show makes him smile "almost to the point of crying," and Nobel Peace Prize winner Malala Yousafzai said a friend got her hooked on the comedy.

Reruns gave the comedy a new life and a new generation of fans, and streaming platforms extended it.

The show's blend of farce, fantasy and aspiration has created a new generation of fans, many of whom, like Yousafzai, weren't born when "Friends" began in 1994 yet have become devotees by watching reruns.

Corden said the show has been watched more than 100 billion times across all platforms, influencing fashion and hair styles.

Like "Seinfeld," it was one of the first American TV comedies to focus on young adults, rather than families or shows set in workplaces.

Aniston recalled being told when she was cast as spoiled Rachel Green that "Friends" was "not going to make you a star."

After the first couple of seasons, the six previously unknown actors had become household names as well as genuine friends.

In a behind-the-scenes spoiler territory, it was revealed that the on-again, off-again romance between characters Ross Geller and Rachel Green wasn't just for the cameras.

Schwimmer and Aniston confirmed for the first time that they had major crushes on each other in the early years of the series, but the first time they kissed was when their characters did so on screen in 1995.

"I just remember saying one time to David, it's gonna be such a bummer if the first time you and I actually kiss is going to be on national television. Sure enough! First time we kissed was in that coffee shop," Aniston says in "Friends: The Reunion."

"We just channeled all of our adoration and love for each other into Ross and Rachel," she added.

The passionate kiss in the Central Perk coffee shop in the Season 2 episode "The One Where Ross Finds Out" is widely considered one of the highlights of the series, which came to an end in 2004 with the two characters finally getting back together.

Schwimmer and Aniston said the mutual attraction lasted for the first two years of the show, but they never got together as a couple off-screen because they were both in relationships or between relationships with other people.

"We were both crushing hard on each other, but it was like two ships passing because one of us was always in a relationship. So we never crossed that boundary, you know. We respected that," said Schwimmer.

Schwimmer recalled that "in the very first year or two when we had breaks from rehearsal, there were moments when we would cuddle on the couch."

"How did not everyone know we were crushing on each other?" he asked co-stars Matt LeBlanc, Matthew Perry, Courteney Cox and Lisa Kudrow.

HBO Max, which hopes the special will drive subscriptions to its year-old streaming platform, is holding outdoor screenings of the reunion special in Los Angeles and New York City, as well as a livestreamed online event for fans.

The special will also be shown on local outlets in countries including India, the United Kingdom, Australia, Taiwan and much of Europe.