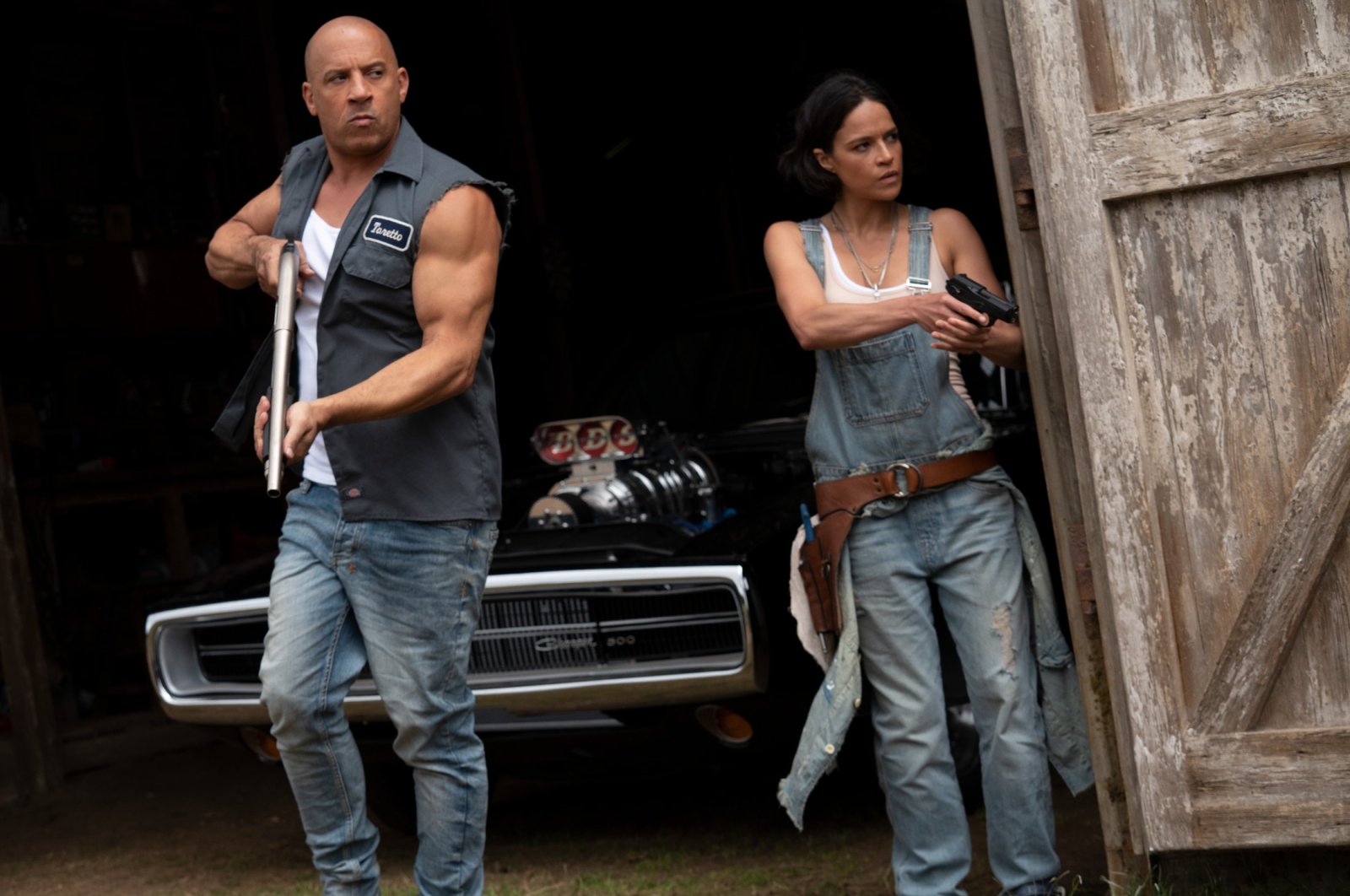 Vin Diesel (L), and Michelle Rodriguez walk out of a barn holding weapons, in a scene from the movie "F9: The Fast Saga." (Universal Pictures via AP)
by Reuters Jun 23, 2021 3:46 pm
RECOMMENDED

It has been too long without summer blockbuster films and Hollywood is finally back from the oblivion of COVID-19 as it tries to rev up the idle engine that was once a billion-dollar-per-film box office franchise.

"F9," the ninth installment in the popular "Fast & Furious" saga, hits U.S. and Canadian cinemas on Thursday night. The movie is the first big-budget action spectacle being released exclusively in theaters this year.

Comcast Corp's Universal Pictures postponed the May 2020 release to give fans the chance to safely watch "F9" on a big screen in a crowd, director Justin Lin said.

"When we make these movies, it's about connection," Lin said in an interview. "It's about people going to the cinemas with their friends and family, to be able to hopefully cheer together and laugh together with strangers."

The "Fast" saga started as a story about illegal street racing and evolved into the tale of a close-knit team involved in heists and espionage. It is one of Hollywood's most successful franchises, collecting more than $5 billion worldwide since the first film in 2001.

In the latest chapter, Dom (Vin Diesel) and Letty (Michelle Rodriguez) are living a quiet life with a young son when they are asked to help thwart a dangerous plot. The movie offers the seat-rattling car chases the franchise is famous for, and ups the drama when a rocket propels a car into space.

Along the way, Dom must "come to terms with whatever acts of the past to have hope for the future," Lin said, a theme that may resonate with pandemic-weary audiences.

"I can relate to that," he said. "It's something that we're all going through."

The film also brings back beloved character Han (Sung Kang), who was killed off in the third "Fast" movie, sparking a fan outcry. John Cena joins the cast as a villain, and rapper Cardi B makes a cameo appearance. Overseas ticket sales are nearing $300 million.

"F9" will be followed this summer by Marvel's "Black Widow" and "Shang-Chi and the Legend of the Ten Rings," a "Space Jam" remake starring LeBron James, the G.I. Joe spinoff "Snake Eyes" and DC Comics' "The Suicide Squad," among others.

About 20% of U.S. theaters remain closed, and some still limit capacity. It is unclear how many people feel safe sitting indoors around others who may not be vaccinated, or whether some may be happy watching streaming services at home.

"It comes down to consumer sentiment," said Shawn Robbins, chief analyst at BoxOfficePro.com. "That is really the unknown factor."

Jim Orr, Universal's president of domestic distribution, said he is optimistic about the prospects for "F9" as restrictions continue to relax. At least two-thirds of theaters are open in every major U.S. market.

"We couldn't be more pleased with the opportunity in front of us to really just ignite the domestic box office," Orr said. "Everything's trending in the right direction."

Robbins predicts "F9" will bring in $50 million to $70 million domestically in its opening weekend. That would top the May release of "A Quiet Place Part II," which set a pandemic record with $47.5 million over its first three days.

This week, theaters are offering advance screenings, discounts and other promotions as part of an industry-wide Cinema Week. Advertisements for new movies are helping spread the word that theaters are open.

In a trailer for "F9," Diesel appealed for people to return to the places where "for 100 years, we all came together to be entertained."

"Nobody does a comeback like the movies," he said.