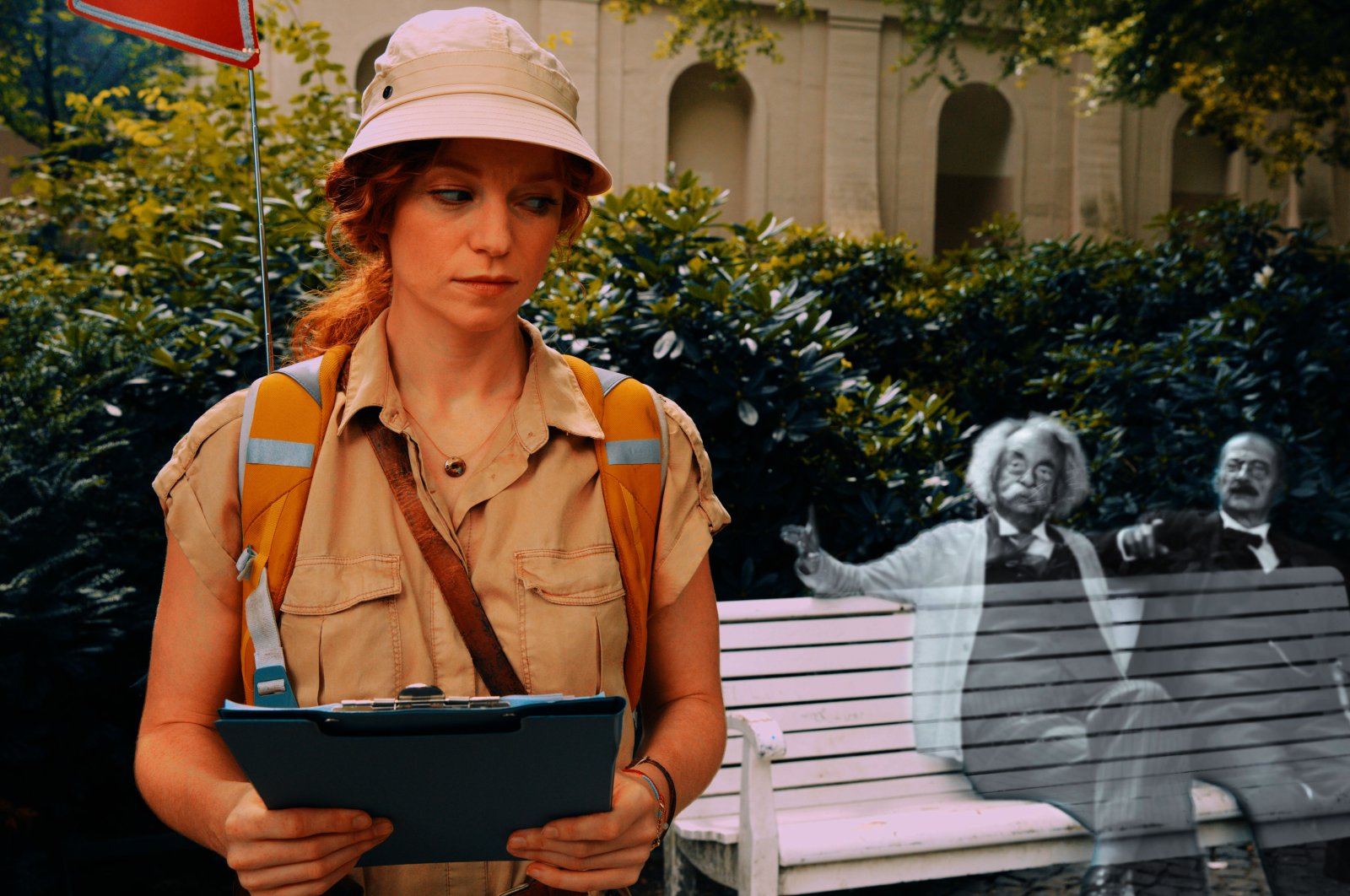 "Cleo" follows a girl's adventure in which she encounters various famous people from history. (Courtesy of Istanbul Modern)
by DAILY SABAH Nov 26, 2020 10:51 am

The “Brand New Films from Germany” program, prepared by Istanbul Modern Cinema in partnership with the Goethe-Institute Istanbul, celebrates its 12th year this winter. The latest edition brings together seven films to be screened for the first time in Turkey on a digital platform for spectators. The selection entitled "Stray Tales" includes a variety of films telling fantastic stories as well as urban legends, some having fairytale-like qualities and others questioning history and facts through their telling of real-life events.

Directed by Johannes Naber, “Curveball– Wir Machen Die Wahrheit” (“Curveball – A True Story. Unfortunately”) will meet spectators on Istanbul Modern Cinema's website on Dec. 5-6. Starring Sebastian Blomberg, Dar Salim and Virginia Kull, the movie is about the true events that proved to be a catalyst for the Iraq War. Even though the German Federal Intelligence (BND) doesn't have the best reputation, an opportunity to prove the opposite arises one day when a resident at a dormitory for asylum-seekers claims to have seen Saddam Hussein's secret weapons. The allegations turn out not to be true and the BND scrambles to cover everything up as developments that will change the course of world history are about to happen. Following the 9/11 attacks, America is on a mission to find the state responsible and decides to look into the BND's Iraqi source. In the telling of this dynamic story, the movie uses moments of comedy to highlight how facts are ignored for the sake of governments and power.

"Coup" directed by Sven O. Hill and starring Daniel Michel, Tomasz Robak and Paula Kalenberg, will be screened online between Nov. 30 and Dec. 2. The story revolves around a young man who has a pretty good life with a family and a child working as a banker by day and performing as a rock musician by night. One day he has the idea to rob a bank – without the use of weapons or force but by taking advantage of its security flaws. He pulls off the plan and manages to escape to Australia with millions. Things get complicated when he invites his girlfriend and child to come to live with him off the stolen money, and his girlfriend says no. In “Coup,” Hill incorporates elements of documentary and animation to portray an incredible narrative.

Directed by Erik Schmitt, “Cleo” will be screened Nov. 26-28. Starring Marleen Lohse, Jeremy Mockridge and Max Mauff, the movie centers around a redhead named Cleo. Although she loves Berlin and the city's history, Cleo begins to live in isolation following the loss of her parents, before adventurous Paul comes to the rescue. Together they embark on a journey in pursuit of a clock that can turn back time. Over the course of their adventure, the pair encounters various famous historical figures, including Marlene Dietrich, scientist Max Planck and the infamous Sass Brothers burglars, but the most important encounter Cleo has is with herself. Schmitt utilizes bizarre effects and digital tricks in the telling of the story.

John David Seidler’s “Das Wunder Von Taipeh” (“We Wanted Moder – The Miracle of Taipei”) will be available Nov. 28-30. In 1981, the managers of the German Football Association received an official letter saying that Taiwan was organizing a Women's World Cup in Taipei and that Germany's participation was expected. The only problem was the Germans didn't have a women's national team as they had never seen the need to establish one. Not wanting to admit this at the risk of embarrassment, it was decided that the SSG 09 Bergisch Gladbach women's football team would be the national team. Although no one had heard of Bergisch Gladbach, the city's women's football team was the best in the country. The team gets ready and goes to Taiwan, covering all the costs themselves. Then, something amazing happens and they become the world champions without losing a single game. The triumph leaves the football association with no other option but to establish a national women's team. “Das Wunder Von Taipeh” is an entertaining documentary with references to men's ignorance and women's vision.

Directed by Bettina Böhler, “Schlingensief – In Das Schweigen Hineinschreien” (“Schlingensief: A Voice that Shook the Silence”) will be screened on Istanbul Modern’s website Dec. 2-4.

Christoph Schlingensief was the biggest provocateur in the German culture and art scene. His “Das deutsche Kettenagen Massaker” (“Blackest Heart”), a retelling of the fall of the Berlin Wall as a horror film, is just one example of his provocative style. If he had been alive, Schlingensief would have turned 60 this year, but sadly he died in 2010 due to lung cancer.

Böhler, who was the editor of many of Schlingensief's films, made a documentary about the unique artist. The production is a masterpiece, touching on Schlingensief's work in an array of disciplines, his character, his restlessness, his boundless dedication and the joy he had for life which he preserved even after learning that he had a terminal illness.

Schlingensief’s “Egomania – Insel Ohne Hoffnung” (“Egomania – Island Without Hope”) accompanies the screening of Böhler’s documentary on Dec. 2-4. Starring Udo Kier, Tilda Swinton and Uwe Fellensiek, the movie is a drama focusing on serious issues like love, jealousy, ambition and murder. Schlingensief was only 26 years old when he made this film. The story follows events that take place on a little island in the North Sea during winter.

Directed by Alexander Kluge, “Happy Lamento” will be available online Dec. 4-6. Kluge is an iconic figure of world cinema known for his distinctive experimental films.

“Happy Lamento,” starring Helge Schneider, Heiner Müller, Galina Antoschewskaja and Peter Berling, is about the circus, electricity and Blue Moon, to which Elvis Presley lent his voice. The movie also presents fights between street gangs in Manila, the capital of the Philippines.