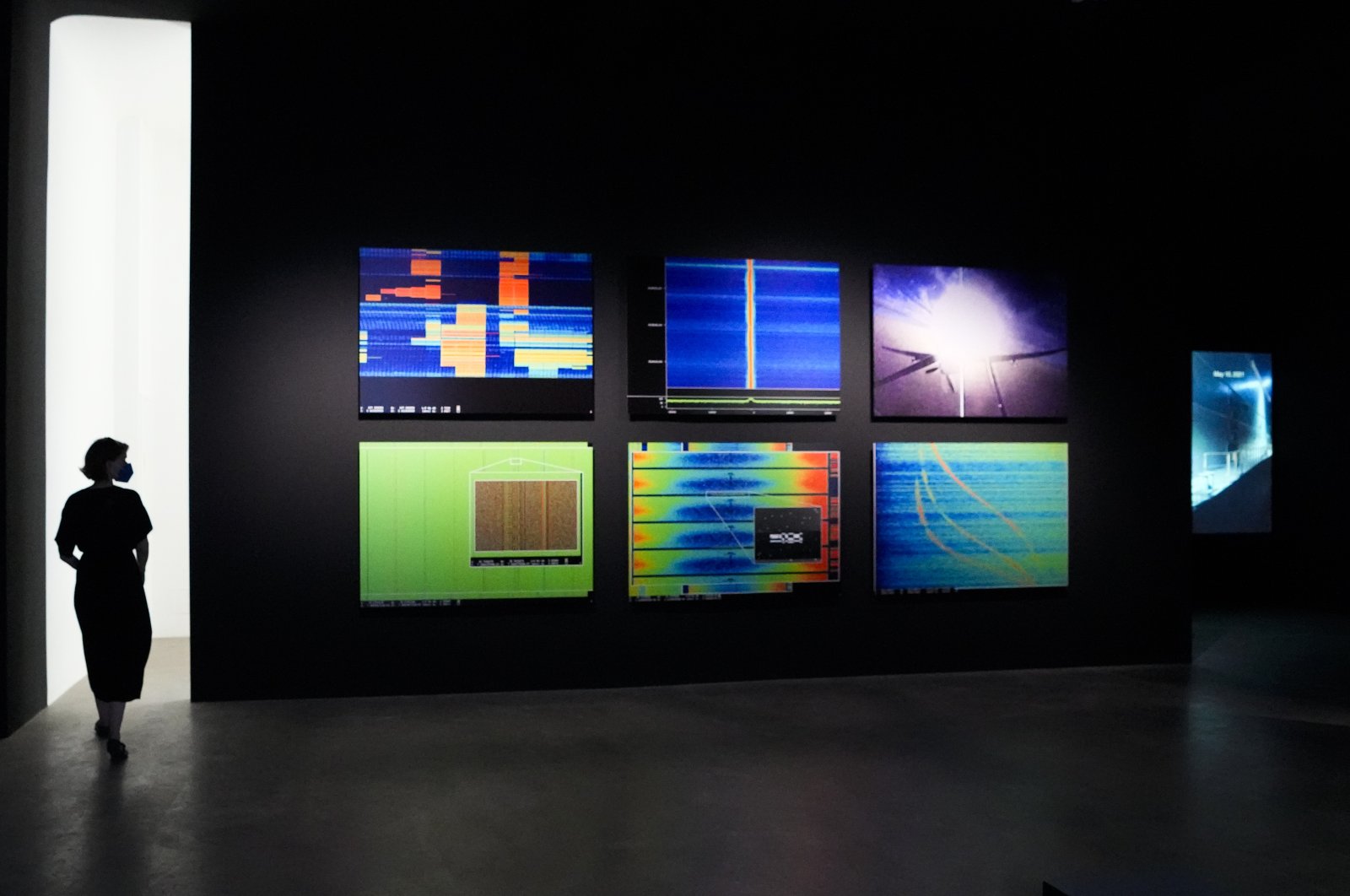 A woman walks through an exhibition by American artist and filmmaker Laura Poitras, near the art work "Anarchist" by Laura Poitras in collaboration with Henrik Moltke, at the N.K.B. gallery in Berlin, Germany, June 18, 2021. (AP Photo)
by Associated Press Jun 19, 2021 6:02 pm
RECOMMENDED

From the Iraq war to former U.S. intelligence contractor Edward Snowden, to the founder of WikiLeaks Julian Assange, the career of American filmmaker Laura Poitras has taken her around the world in pursuit of the truth behind intelligence and surveillance, leaks and wars, behind the workings of the infamous National Security Agency and governments in general, with even an Academy Award along the way. Now, she has turned her camera once again on the watchmen.

In an exhibition that opened Friday in Berlin, Poitras examines the way the state monitors citizens' lives – both abroad and at home, in New York City.

While her early work on the war in Iraq and the U.S. government surveillance apparatus – including the Oscar-winning "Citizenfour" – follows the long trail of the Sept. 11 attacks, Poitras' new show grapples with the issues of the past year: The COVID-19 pandemic and the fight for racial justice.

The goal remains, Poitras said, to "create experience that has emotional resonance."

"I want to interrogate power," she told The Associated Press (AP) in an interview ahead of the show's launch.

Together with artist Sean Vegezzi, Poitras puts viewers outside an NYPD outpost in Queens used by the Technical Assistance Response Unit, whose role is to monitor political protests. The unit employs military technology to gather intelligence, including on recent Black Lives Matter rallies, but officers seem unaware that they are being watched as they enter and leave the building.

A second video combines exterior shots of the Vernon C. Bain prison barge on the East River with three months of intercepted radio recordings between guards discussing the apparent use of force against inmates. The crowded prison – set up as a temporary facility almost three decades ago – saw high death rates from COVID-19 last year.

Poitras and Vegezzi said they were surprised that the prison's continued existence and the conditions there haven't been taken up by local politicians, given that most of the inmates are local residents awaiting trial for minor crimes.

"As a New Yorker I hope that it's difficult to look at this prison ship and know that you are complicit in it," Poitras said, admitting: "We are interested in getting this shut down."

The series is completed with a visit to little-known Hart Island, home to one of the largest mass grave sites in the United States with burials dating back to the Civil War era.

Vegezzi, whose brother was among a prison detail from Rikers Island tasked with burying the dead, used a drone to show how detainees with little social distancing or protective equipment stacked coffins in deep trenches at the height of the pandemic. The Department of Corrections halted the practice after it became public last year.

The triptych's bleak, distanced footage contrasts with Poitras' 25-minute film "Terror Contagion" about Israeli spyware company NSO and its alleged role in the monitoring of activists around the world.

Rights groups including Amnesty International claim that the company's technology has been licensed by repressive regimes to infiltrate the phones of dissidents and journalists, a charge that NSO rejects.

The film was made together with the research group Forensic Architecture, which says its members and collaborators have been hacked using the NSO spyware Pegasus. The group plans to release a broader investigation into the company next month.

Since the start of the pandemic, NSO has sought to apply its technology – originally designed to hunt down terrorists – to COVID-tracking tools, alarming human rights activists.

"The pandemic rules and surveillance technology are definitely going to be exploited and normalized in future," said Poitras.

The filmmaker was herself the subject of intense surveillance by the U.S. government that started after she visited Baghdad in 2004 for her film "My Country, My Country." After coming under heightened scrutiny for her work with Snowden, who remains in exile in Russia, Poitras was based for years in Berlin, a city she chose to return to for this latest exhibition.

The German capital has its own grim history of state surveillance. The show's gallery is located in the formerly communist-controlled east of the city. It also lies just a few hundreds yards from the bombastic new home of Germany's BND foreign intelligence agency.

Poitras and Vegezzi hope to take the exhibition to New York in the fall.