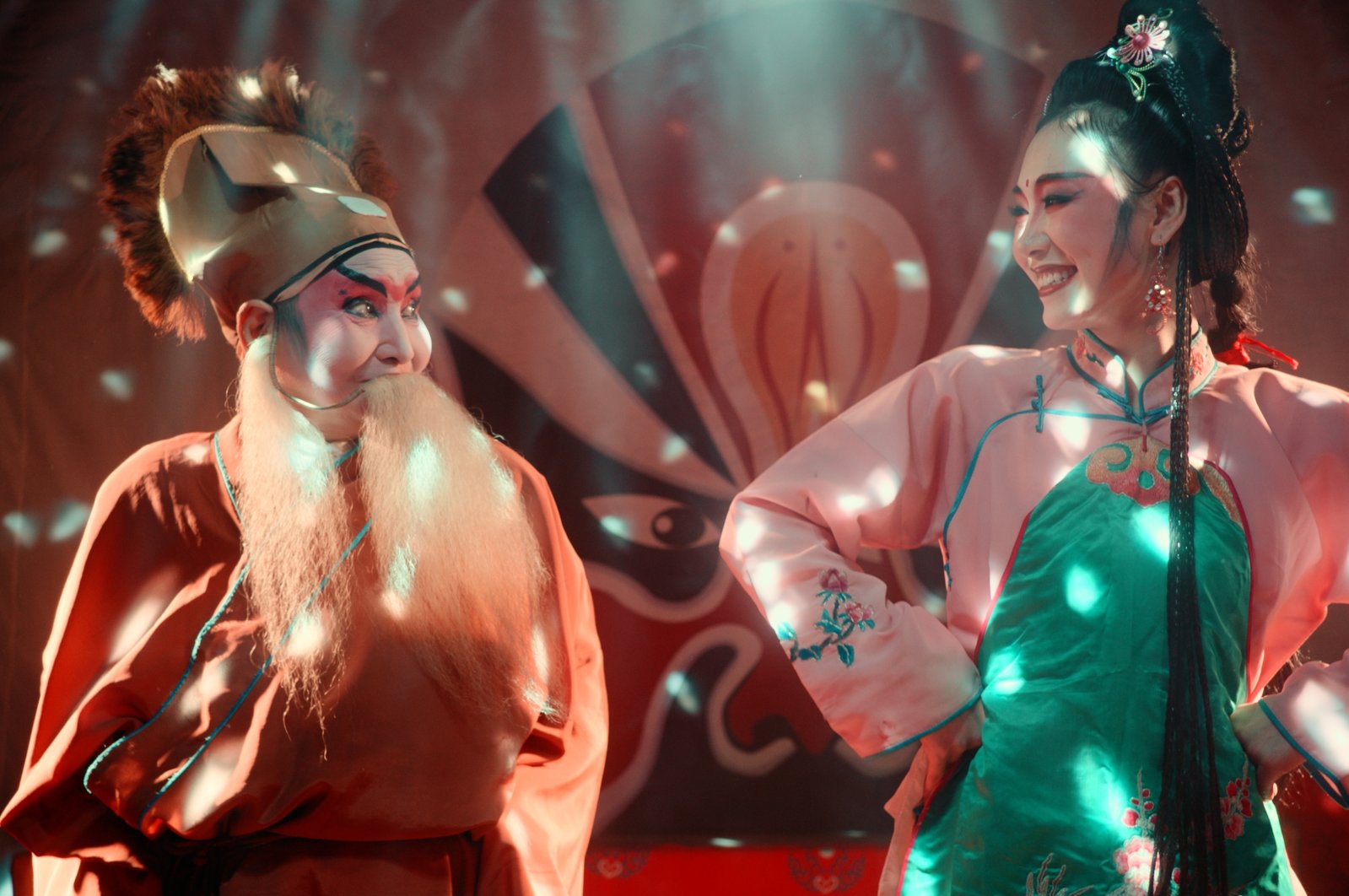 A selection of contemporary Chinese films that have been hits at the box office or in festivals will provide insight into the shifts that Chinese society and cinema have undergone, at Istanbul Modern Cinema

Istanbul Modern Cinema is set to present a selection of the latest works from contemporary Chinese cinema between Sept. 17 and 27.

The “Set in China” lineup offers audiences a glimpse of some of the most recent Chinese features and has been organized in cooperation with the Consulate General of the People's Republic of China in Istanbul.

Works selected for this year's installment of the program explore the socioeconomic transformations Chinese society has rapidly undergone by casting focus on various subjects and characters, while also reflecting on Chinese cinema’s expansion to include new genres as it gains an ever-growing footing in world cinema.

Directed by Diao Yinan and starring Hu Ge, Kwei Lun-Mei and Liao Fan, “The Wild Goose Lake” (“Nan Fang Che Zhan De Ju Hui”) will be screened on Sept. 17 at 2:30 p.m. and on Sept. 19 on midnight. The newest film from Diao, who has cemented his place worldwide with his previous work “Black Coal, Thin Ice” (“Bai ri yan huo”), is a film noir in which each frame is delicately placed. In the story, set in the Chinese city of Wuhan, Zhou Zenong is the head of a motor gang. When he accidentally kills a police officer and a price is set on his head, however, he is forced to flee both the police and the gangs seeking bounty. Along the way, he encounters a woman who has to flee for her freedom like him, and the two embark on a new adventure together. “The Wild Goose Lake,” inspired by actual events in Wuhan in 2012, was the only Chinese film to be nominated for the Palme d’Or (Golden Palm) at the Cannes Film Festival last year.

Directed by Lou Ye and starring actors Gong Li, Chao Mark and Greggory Pascal, “Saturday Fiction” (“Lan Xin Da Ju Yuan”) will be screened on Sept. 17 and 20 at midnight. “Saturday Fiction,” set in Japanese-occupied Shanghai during World War II, is a high-tempo spy film. The story sees famed actor Jean Yu return to the city to star in a theatrical play. However, other reasons lie behind this goal. Concealed microphones, double-sided mirrors, binoculars and encrypted messages escalate the tension of secret meetings while the play's opening night will turn into a political event of international importance. Gong, a megastar in Chinese cinema, displays an impressive performance in the lead role of the film, which was nominated for the Golden Lion (Leone d'Oro) at the Venice Film Festival last year.

Directed by Wang Xiaoshuai and starring actor Wang Jingchun, Yong Mei and Qi Xi, “So Long, My Son” (“Di Jiu Tian Chang”) will be screened on Sept. 24 at 5 p.m. and on Sept. 27 at 2:30 p.m. “So Long, My Son,” the newest film by Wang, a sixth-generation director of Chinese cinema, deals with the striking impact of China's one-child policy through the lives of two families whose children are close friends. Liyun and Yaojun, a couple working at a factory, are close friends with Haiyan, her husband and children. Liyun and Yaojun's son goes swimming at the insistence of his friend and drowns to death. Liyun, the mother, finds out that she is pregnant again just before this tragic event, and Haiyan, whom she considers a friend, exposes her to the authorities, leading her into being forced to have an “illegal” abortion, and the two families part ways. Although this epic melodrama tells a story spanning 30 years, you lose track of time while watching the three-hour film thanks to its detailed visuals, masterful acting and finely addressed plot.

Directed by Lulu Wang and starring actors Awkwafina, Diana Lin and Zhao Shuzhen, “The Farewell” will be screened Sept. 24 and 27 at midnight. After getting to know that his grandmother, Nai Nai, has stage IV lung cancer, Billi returns to her homeland from the U.S., where she has lived for a long time. While she thinks that it is a mistake for her family in China to hide her illness from her grandmother, the family is busy organizing a fake wedding and hiding the facts so that Nai can see the whole family together one last time. Awkwafina, the lead actress of the film, a combination of comedy and family drama, based on director Lulu’s own life story, was awarded a Golden Globe Award for Best Actress.

Directed by Zu Feng and starring actors Chen Minghao, Huang Lu and Tian Yu, “Summer of Changsha” (“Liu Yu Tian”) will be screened on Sept 19 at 2:30 p.m. and on Sept. 26 at 2 a.m. In the story, a police detective named A Bin wants to resign his post after his girlfriend's suicide. Meanwhile, he is tasked with checking missing people lists in the city when a fisherman finds a human arm in the river. Then, he inevitably becomes part of this investigation. At this time, he meets a beautiful doctor whose brother has been missing for weeks. As these two characters try to cope with their ripple of guilt, will this new prospect of love make them forget their pain? “Summer of Changsha,” shown in Un Certain Regard at the Cannes Film Festival, is a love story intertwined with a detective film.

‘To Live To Sing’

Directed by Johnny Ma and starring actors Zhao Xiaoli, Gan Guidan and Yan Xihu, “To Live To Sing” (“Huo zhe chang zhe”) will be screened on Sept. 20 at 2:30 p.m. and on Sept. 26 at 5 p.m. The Sichuan Opera Troupe, led by Zhao Li, stages cheap production plays in ruined opera houses to keep alive opera, which is followed by a smaller and smaller audience every day. Zhao beats his brains out to keep this art alive, whose audience is disappearing. Although the news that the building they use will be demolished and that the younger members of the troupe prefer better-paid jobs makes it all the more difficult, she does not give up her struggle. Meanwhile, the fantastic characters of the opera enter her life in other ways. The Chinese-born Canadian director Ma decided to make a film about the troupe's challenging art life after watching a documentary on the Sichuan Opera.

‘Dwelling in the Fuchun Mountains’

Directed by Gu Xiaogang and starring actors Dong Zhenyang, Du Hongjun and Mu Wei, “Dwelling in the Fuchun Mountains” (“Chun Jiang Shui Nuan”) will be screened on Sept. 17 at 5 p.m. and on Sept. 19 at 7 p.m. Xiaogang is inspired by a famous landscape painting by Chinese painter Huang Gongwang, made in the 14th century, in his first feature film. Named after this painting, the film features one year that the Yu family spends in the city of Fuyang. It also reflects the visual aesthetic of the Chinese painting, which was made on a seven-meter Chinese parchment paper. Set in the beautiful river landscape of Fuyang, this family drama reveals the ups and downs of the lives of four adult sons, the conflict they experience between tradition and modern reality, and the changes that the city has undergone as a result of urban transformation. Designed as the first film of a trilogy, “Dwelling in the Fuchun Mountains” was nominated for the Grand Prize at Cannes' Critics Week.

Directed by Pema Tseden and starring actors Wangmo Sonam, Jinpa and Tso Yangshik, “Balloon” (“Qi Qiu”) will be screened on Sept. 24 and 26 at 2:30 p.m. The film by Tibetan director Pema Tseden is about a family living in a highland village. At the center of the story is Drolkar, who wants to settle for three children thanks to the Chinese government's birth control program, and her sister, who chooses to be a Buddhist nun. They both try to maintain their independence in a religious society where the reincarnation and the world of spirit are intense in different ways. “Balloon” approaches its characters, struggling between fate and freewill and between the old and the new, in a warm and witty manner.