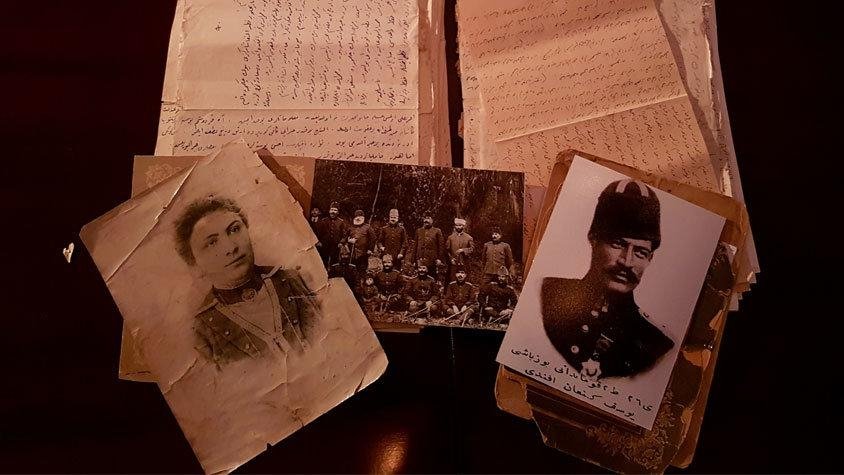 Letters that Yusuf Kenan and Zehra wrote to each other, in a scene from the documentary.
by DAILY SABAH Jan 11, 2021 1:05 pm
RECOMMENDED

The documentary "Bir Gelibolu Kahramanı: YUSUF KENAN" ("A Gallipoli Hero: YUSUF KENAN"), directed by Mesut Gengeç and supported by the General Directorate of Cinema of the Culture and Tourism Ministry, is now available for online viewing.

As the name suggests, the documentary features Capt. Yusuf Kenan, the seventh company commander who was the first person to realize that English troops were landing at Ikiz Bay on Apr. 25, 1915, during the Gallipoli campaign of World War I.

His name went down in history when he succeeded in blocking 2,500 enemy troops from advancing with just 250 soldiers at his command. The 45-minute heart-wrenching documentary includes the option of viewing with English subtitles.

Yusuf Kenan was just one of the tens of thousands of soldiers who were martyred in the Gallipoli campaign. He died while fighting heroically in Kirte (Krithia) 106 years ago, on Apr. 25, 1915. His family heard about his death 15 days later. He left behind his 27-year-old wife Zehra Hanım, 3-year-old daughter Rüçhan and 6-month-old baby girl Müjgan, like tens of thousands of other widows and orphans.

However, what makes the story of Yusuf Kenan and Zehra unique is the letters they exchanged, which are featured in the documentary and show both the couple's longing for each other and sometimes resentment. Some of their letters start with "My soul, my dear husband," while others start with "To a wretched wife."

The docudrama stars Barış Yurtsever as Yusuf Kenan and Banu Günal as Zehra. The general coordinator is Bülent Günal, and the project coordinator is Yılmaz Aydın.

The major scenes of the docudrama were reenacted. It also features interviews with the grandchildren of Yusuf Kenan, historians Vahdettin Engin and Muzaffer Albayrak, war historians Şahin Aldoğan and Gürsel Akıngüç.