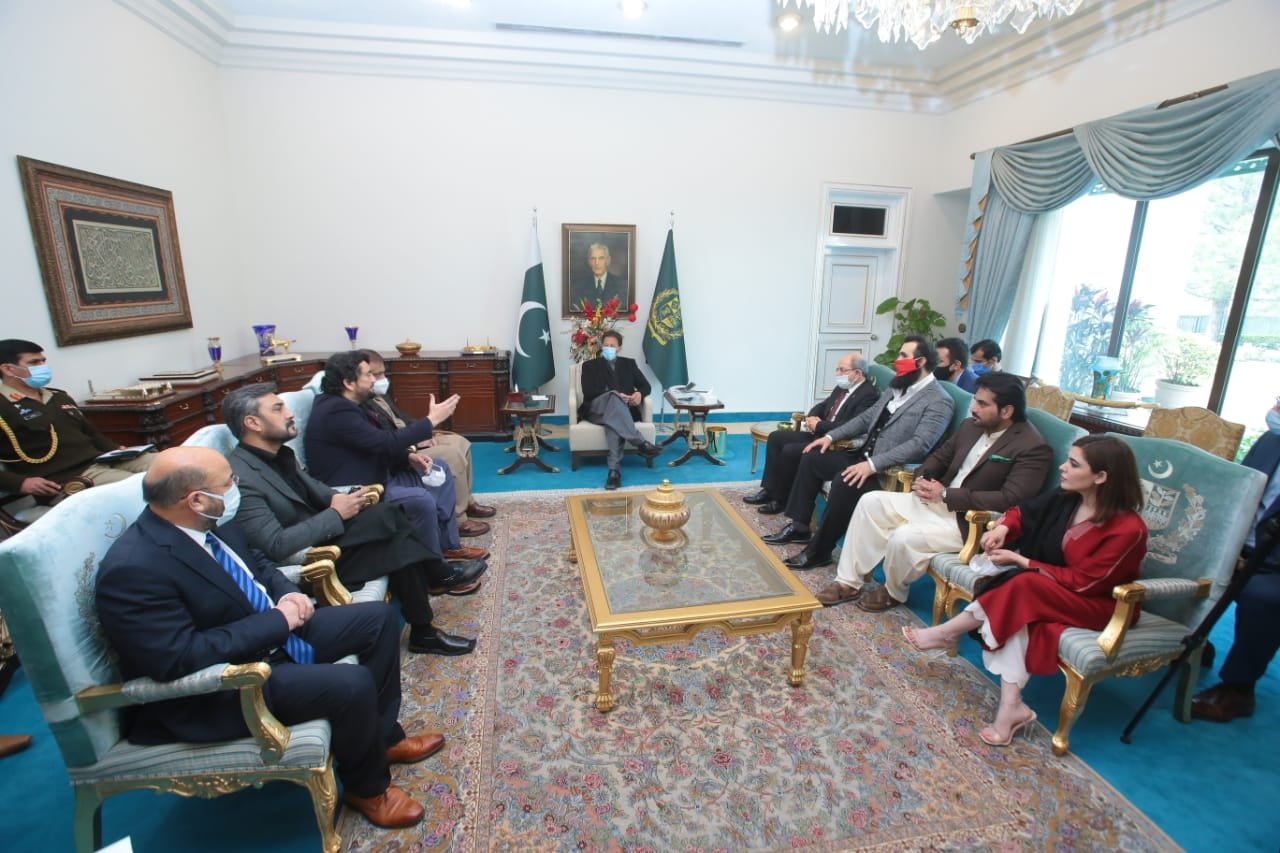 Prime Minister Imran Khan (C) together with the board headed by Turkish director Kemal Tekden at his office in Islamabad, Pakistan, Jan. 8, 2020. (AA Photo)
by Anadolu Agency Jan 08, 2021 1:19 pm
RECOMMENDED

Pakistan and Turkey are considering working on a joint project to produce a historical TV series, according to an official statement issued by the Pakistani prime minister's office.

Prime Minister Imran Khan Thursday discussed the proposal with leading Turkish director Kemal Tekden and his team, who met with Khan at his office in Islamabad.

According to the statement, Khan welcomed the Turkish team and praised their work in producing the historic Ertuğrul series.

The two sides also discussed the proposed joint TV series dubbed "Turk Lala," which is to highlight the role played by Muslims of the Indian subcontinent during the Balkan War.

Lala, in the Pashto language, refers to "elder brother," and the series is about the role of Muslims from the subcontinent who went to Turkey in 1920 and fought against the imperialist forces.

Most of the Muslims who helped the Turkish side traveled from present-day Pakistan under the Khilafat Movement flag – a campaign to support the Ottoman Empire in the early 20th century.

Turkey and Pakistan enjoy historic relations thanks to the help extended during Turkey's War of Independence.

Afridi briefed the premier on the proposed series and said Turk Lala played an important role in the Khilafat Movement.

He was referring to Abdur Rehman Peshawari, who held the distinction of becoming one of the very first reporters of Anadolu Agency (AA) when it was founded in the early 1920s.

Born in 1886 in Peshawar, the capital of Pakistan's Khyber Pakhtunkhwa province, to the wealthy Samdani family, Peshawari abandoned his studies to join the people's mission to help Turkey during the First Balkan War.

"This series (Turk Lala) will educate our younger generation about our heroes," Afridi said, highlighting the importance of Turk Lala in Turkey and his role in the Khilafat Movement.

"Both Prime Minister Khan and Turkey's President Recep Tayyip Erdoğan have the same vision that youth could play an important role in the development of any country and they (youth) must be educated about their history and culture," Tekden said.

"We observe June 30 every year as a national day in respect of 'Turk Lala' in Turkey," he added.

Highlighting the proposed series, he said it would create a new chapter in the historic relationship between Pakistan and Turkey and the youth of both countries would learn about the historical role of their heroes.

Speaking on the occasion, Khan said, "'Resurrection: Ertuğrul' has gained much popularity in Pakistan because of its story."

He said Pakistani dramas and films were very popular across the world until the 1980s.

"When Muslims were ruling the subcontinent ... it was a golden age of our history. But unfortunately, our younger generation does not know about it," Khan said.

He proposed to produce more TV series on that "golden era and also counter the propaganda."

The blockbuster series is being broadcast under the title "Raah-e-Isahq," meaning "Path to Love," with Urdu dubbing on Pakistan Television, already having attracted a large viewership.