Turkey’s legacy with sci-fi and superheroes in film 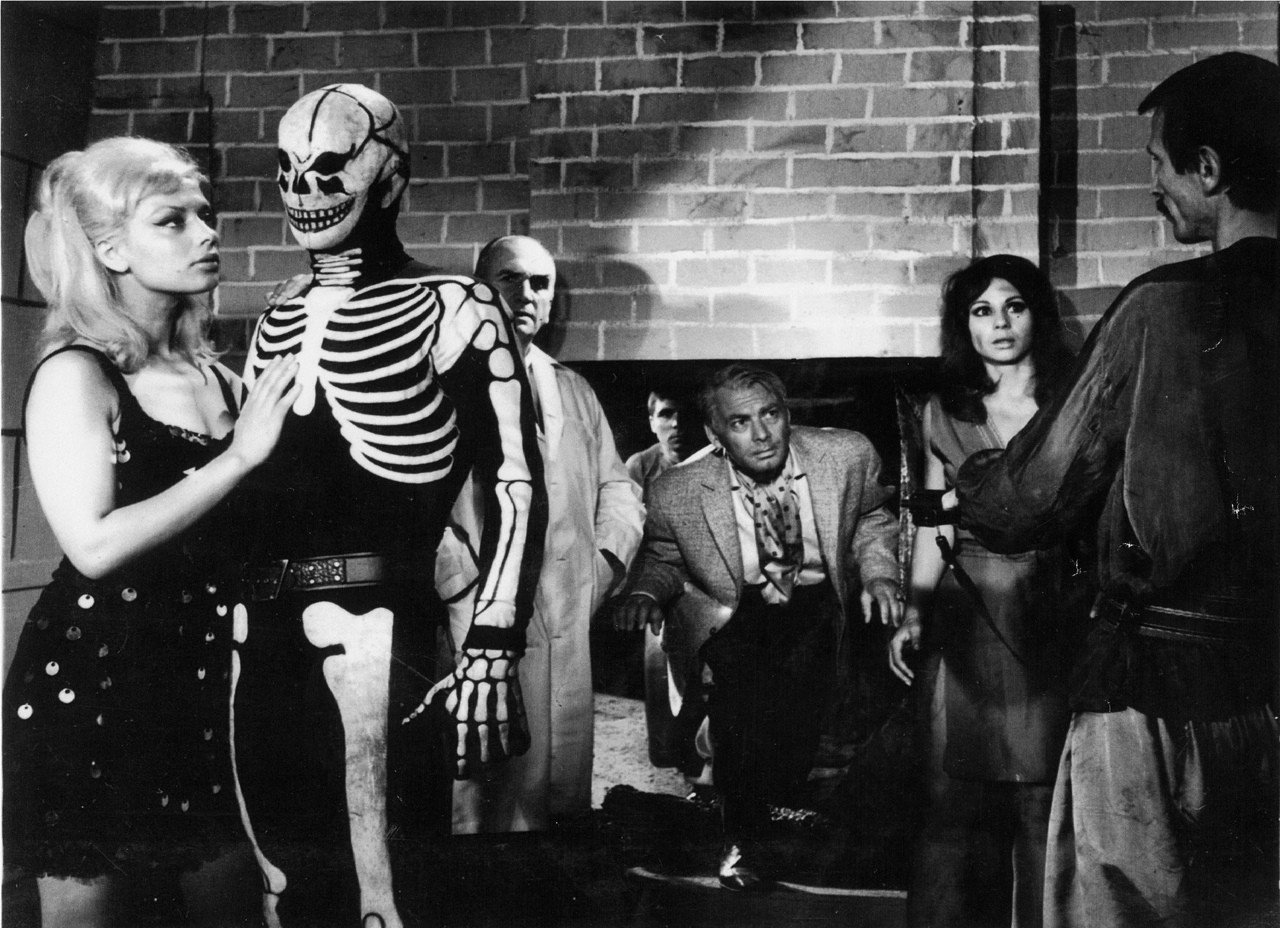 Although the newest 'Akıncı,' which is set to draw a huge audience, is the very first Turkish sci-fi TV series, the country’s film legacy in this genre goes back much further

'Al Maktab': Saudi Arabian adaptation of 'The Office' in the works

Last week marked the start of Turkey’s first-ever science fiction television series, “Akıncı,” which tells the story of an Ottoman superhero tasked with guarding over the Istanbul of Sultan Mehmed II, also known as Mehmed the Conqueror, in contemporary times.

A teacher by day and a superhero by night, the handsome Akıncı, whose name refers to the advanced troops of the Ottoman Empire, is tasked with stopping terrorism while being followed by an equally attractive female journalist who has been on his trail for the past three years. An enthralling and entertaining watch, the highly anticipated Akıncı premiered on Jan. 1 and will continue to air on Friday evenings at 8 p.m. on ATV.

In light of this exciting addition to Turkish primetime television, which is also the first of its kind within the genre of science fiction and superhero television series, it might be an opportune time to reflect back on Turkey’s famous legacy of its films in these genres.

While this may be Turkey’s entrance into the world of science fiction on television, the country’s film industry actually has an intriguing and entertaining legacy in this genre of movies. That is because starting back in the 1950s and throughout the country’s cinematic heyday, the Yeşilçam era, in which upward of 300 films were produced each year, Turkey also famously began filming its own versions of Hollywood blockbuster sci-fi films. From “Star Trek” to “Star Wars” and “E.T.” to “The Exorcist,” check out some of the hilariously entertaining remakes of some of your favorite sci-fi films.

It all started in the 1950s when remakes of Hollywood films such as “Dracula” and “Tarzan” were produced for a Turkish audience, i.e. “Tarzan Istanbul’da” (“Tarzan in Istanbul”) and “Drakula Istanbul’da” (“Dracula in Istanbul”), released in 1952 and 1953, respectively. Little did they know then that these films and many more would go on to become cult classics over half a century later, screened in festivals and theaters all over the world. The first sci-fi variation of the remake genre was "Görünmeyen Adam Istanbul'da" ("Invisible Man in Istanbul"), which was released in 1955 and tells the story of a chemist who takes an invisibility serum to seek revenge on his wife and her lover.

In Turkey’s first alien film, “Uçan Daireler Istanbul’da” (“Flying Saucers over Istanbul”), which was released in 1955, female Amazon aliens land their UFO in Istanbul to take men from Earth back to their planet with the help of a robot.

In the 1960s and more specifically 1967-1968, a series of films was released in Turkey centering on Kilink, an anti-hero reminiscent of the Italian comic strip character Killing. In the Turkish productions “Kilink Istanbul’da” (“Kilink in Istanbul”), “Kilink Uçan Adam’a Karşı” (“Kilink vs. Flying Man”) and “Kilink: Soy ve Öldür” (“Kilink Strip and Kill”), Kilink is challenged by none other than Superman. There were also the related films “Female Kilink” and “Kilink against Frankenstein” that pretty much speak for themselves.

In 1973, the Turkish film industry literally came up with the concept of superhero teams by combining the powers of Captain America, Spider-Man and Mexican wrestler El Santo in “3 Dev Adam,” in English "3 Giant Men." While Spider-Man serves as a mafioso and Captain America as a Turkish policeman, this is not the first time we have had a Turkish Spider-Man as a villain, as the 1966 film “Örümcek Adam” portrays the character as a con man pitting the police against the mob.

The 1971 “Tarkan Versus the Vikings” (“Tarkan: Viking Kanı”) has the Hunnic warrior Tarkan fighting off an Octopus God-worshipping Viking Clan to save a woman from being sacrificed. In 1972, “Yılmayan Şeytan” (“The Deathless Devil”) was a remake of the 1940 serial “Mysterious Doctor Satan” and pits the superhero Copperhead against Dr. Satan. The year 1973 also saw the releases of Turkey’s version of Batman, aka “Yarasa Adam.” Meanwhile, Turkey also produced its own Exorcist film called “Şeytan” in 1974.

‘Ömer the Tourist in Star Trek’

Ömer the Tourist was a popular comedic character played by renowned actor Sadri Alışık, who starred in eight movies depicting the Turkish hobo-esque character in different situations with the final edition being a “Star Trek” movie with many elements replicating scenes from the popular sci-fi television series. Forced into an arranged marriage, Ömer believes his wish to disappear has been granted when he is beamed away onto the Starship Enterprise equipped with Kaptan Kirk and Spock. Filmed in 1973 and referred to in Turkish as “Turist Ömer Uzay Yolunda” (“Ömer the Tourist in Star Trek”), the production is a hilarious Turkish take on the film series. In a sense, the film came before its time as it was reproduced six years before the original “Star Trek” feature film was released. If you enjoy Alışık’s beloved character, you can also catch him in other escapades such as in Germany, in Saudi Arabia, bullfighting and even fending off cannibals.

‘The Man who Saved the World’

Dubbed the Turkish “Star Wars,” “Dünyayı Kurtaran Adam,” i.e. “The Man who Saved the World,” is actually a unique take on a number of sci-fi and adventure favorites including “Indiana Jones,” “Ben Hur,” “Battlestar Galactica” and “Flash Gordon.” Starring heartthrob Cüneyt Arkın and filmed in 1982, the film follows an original script in which two novice astronauts crash-land on a desert planet (Cappadocia) where an evil force is attempting to take over the world. This wasn’t the first time Arkın was filmed with superpowers as the 1975 “Kılıç Aslan” tells the story of the beastly powers of a man raised by lions. Meanwhile, in 2006, an unrelated sequel of sorts called “Turks in Space,” or in Turkish, “Dünyayı Kurtaran Adam’ın Oğlu,” which actually translates to “The Son of the Man who Saved the World,” tells the story of a Turkish family settling into life on a new planet.

“Badi” was Turkey’s answer to the popular alien film “E.T.” and was released in 1983, however instead of being adorable, young Ali’s friend Badi is admittedly a bit frightening. Sadly, this was not the sole attempt to shoot a Turkish “E.T.” as the 1987 film “Homoti” also has us feeling bad for our beloved “E.T.”

Some of the highest-grossing films in Turkey of all time actually happen to be science-fiction comedies. Starring stand-up comedian, actor and filmmaker Cem Yılmaz, the trilogy that started with “G.O.R.A.” in 2004 and was followed by “A.R.O.G.” in 2008 and “Arif V 216” in 2018 is excellent high-quality, laugh-out-loud viewing of a series centered on a hilarious and endearing carpet salesman who is abducted by aliens to the planet G.O.R.A.

'Al Maktab': Saudi Arabian adaptation of 'The Office' in the works