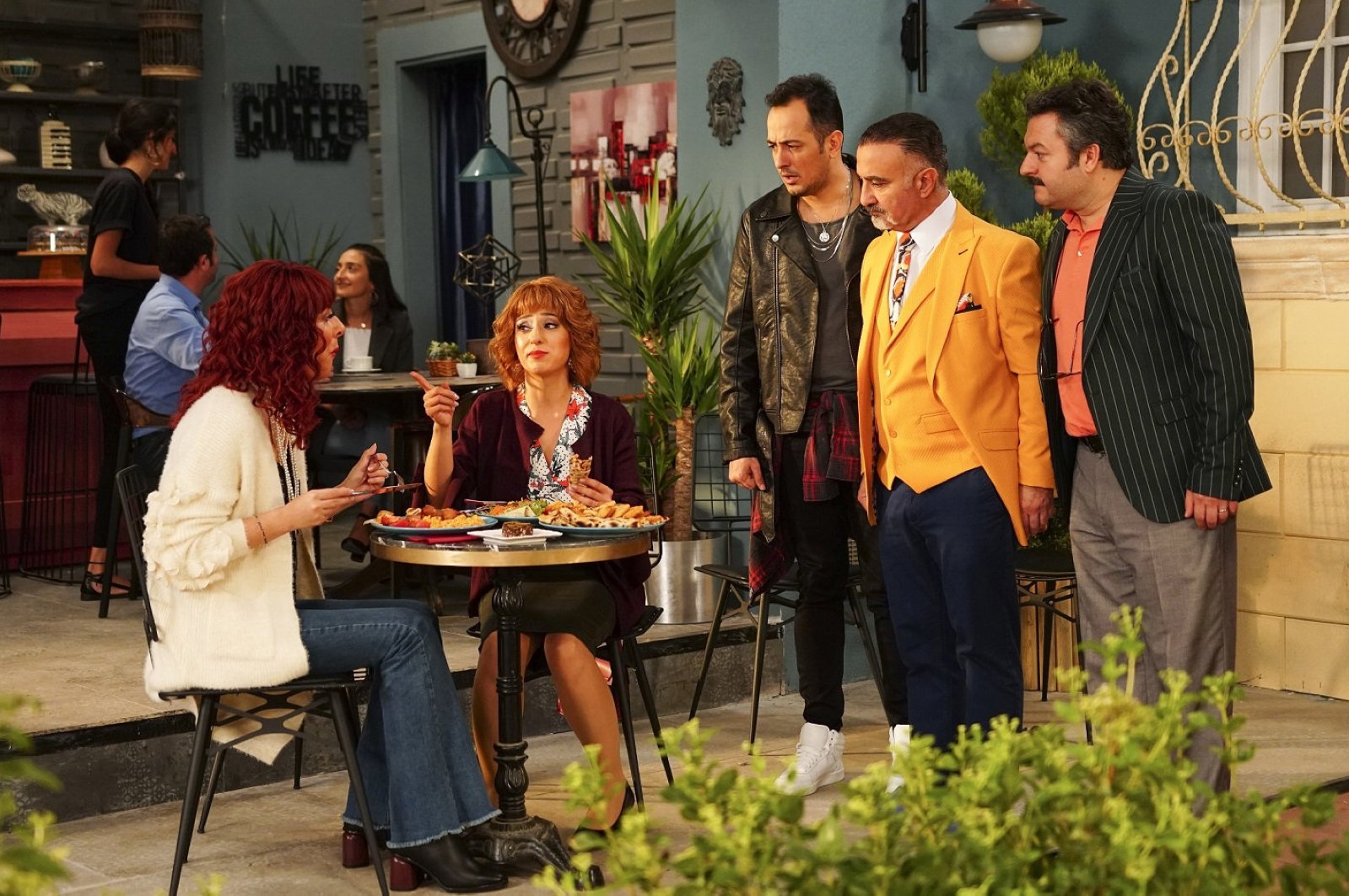 While the coronavirus has hit the media and entertainment sector, actors of the famous Turkish sitcom ‘Jet Sosyete’ will bring fresh comedy to the screen with a special episode, shot from their own houses during the self-isolation period

Just like all business sectors, the entertainment industry has halted its activities due to the novel coronavirus outbreak, but this has not stopped the show's writer and lead actress Gülse Birsel from shooting an online episode and entertaining viewers once again.

Birsel is one of the most beloved comedians in Turkey, and as the scenarist of the show, she invited all her co-stars to shoot an episode from their houses. The stars shared their experiences with Anadolu Agency (AA).

Talking about where they came up with the idea of shooting a special episode, Birsel said: "We were shooting our last episode on the set, but just before completing it, the coronavirus outbreak arrived in Turkey. We stopped all shooting and went home. Then I thought that the sitcom format is in fact like talking heads, one after the other. Can we not turn the remaining part of this episode into something like a video call? Then I changed the script and sent it to all actors. They all shot their parts and sent them back to me. After a montage, it turned out to be great. Later I thought of shooting a whole 'Jet Sosyete' corona episode."

Noting that we are all experiencing tragic times, the comedian added that she can still find some humorous themes to entertain the masses. "We see in social media that people need hope, fun and morale right now, which motivates us to do such projects these days," she said.

Birsel has written many scenarios for TV series and films to date. However, due to the unique nature of this episode, which was to be shot online, she needed to produce a different concept this time. "I learned a lot while writing this script. It does not involve action, movement, use of physical talent, or even walking. There is only one angle, so you have to work on characters, dialogue, conflicts and emotions. The lines should be very short so that it doesn't bore the viewer. And all actors have to be their own hairdressers, cameramen and directors."

"I send the scripts as I write them. This episode will be something like a compilation of short sketches. It will summarize what we all go through in the days of the coronavirus. I hope we can be a source of morale for our people," she added.

In filming, one of the most difficult parts is surely the technical processes. But how can these processes be sustained without major problems during online shooting? Birsel explained that they created an online pool to which everyone sends their clips and can view those sent by others. "If one scene includes four actors, they watch each other's clips so that they would be in harmony. Our stage direction also watches these scenes and sometimes asks for changes. We still work as a team, the difference is we are working online now. With our homes as the background, we try and do the lighting with our phones, and record lines with voice recorders. And I guess it will turn out to be good."

All 11 characters in the show live in different places. Birsel asked all actors to take photos from each corner of their homes to find the most suitable places for the shoot. For example, they needed a villa with a garden and used the houses of some actors who live in apartments with a garden. "For that reason, we were able to make our scenes quite persuasive. Coincidentally, two actors' bathrooms are nearly alike, so we also used that in the script. It's a very anxious but also a fun experience," she continued.

Cengiz Bozkurt, one of the lead actors of the show, said: "This is a unique experience. When Gülse proposed doing this, I thought, such a practical solution could only come from our country. We are very proud to have done this. We decorated our homes in line with those of the characters. I think it will be a great episode."

Hasibe Eren, another actress in the show, said: "My scenes haven't been shot yet, but I am very excited. We got out of our home routine and went back to our work with limited means. I have a set in my house now. I will prepare my scenes too and then shoot them. I hope our viewers will also share our excitement. I believe people will find a lot from their experiences in this corona episode."

Although an online episode is such a great idea, Birsel does not want to inspire other producers to do the same during this period. She hopes that the outbreak will end soon and all producers will be able to resume their shoots normally. Stating that their format as a sitcom is a bit more suitable for online shooting, Birsel noted: "It is certain that what matters is the story and performance. They are our strongest weapons, which means theater lies at the foundation of all this."

"I believe the U.S. show 'Modern Family' did something similar a few years ago and shot an ad episode for a phone company. Other than that, this will be a first," she said.

Turkey is a country that adapts quickly to difficult situations, and for that reason, it is no surprise this idea emerged here. The special coronavirus episode of "Jet Sosyete" will be aired on Star TV in Turkey on April 8.