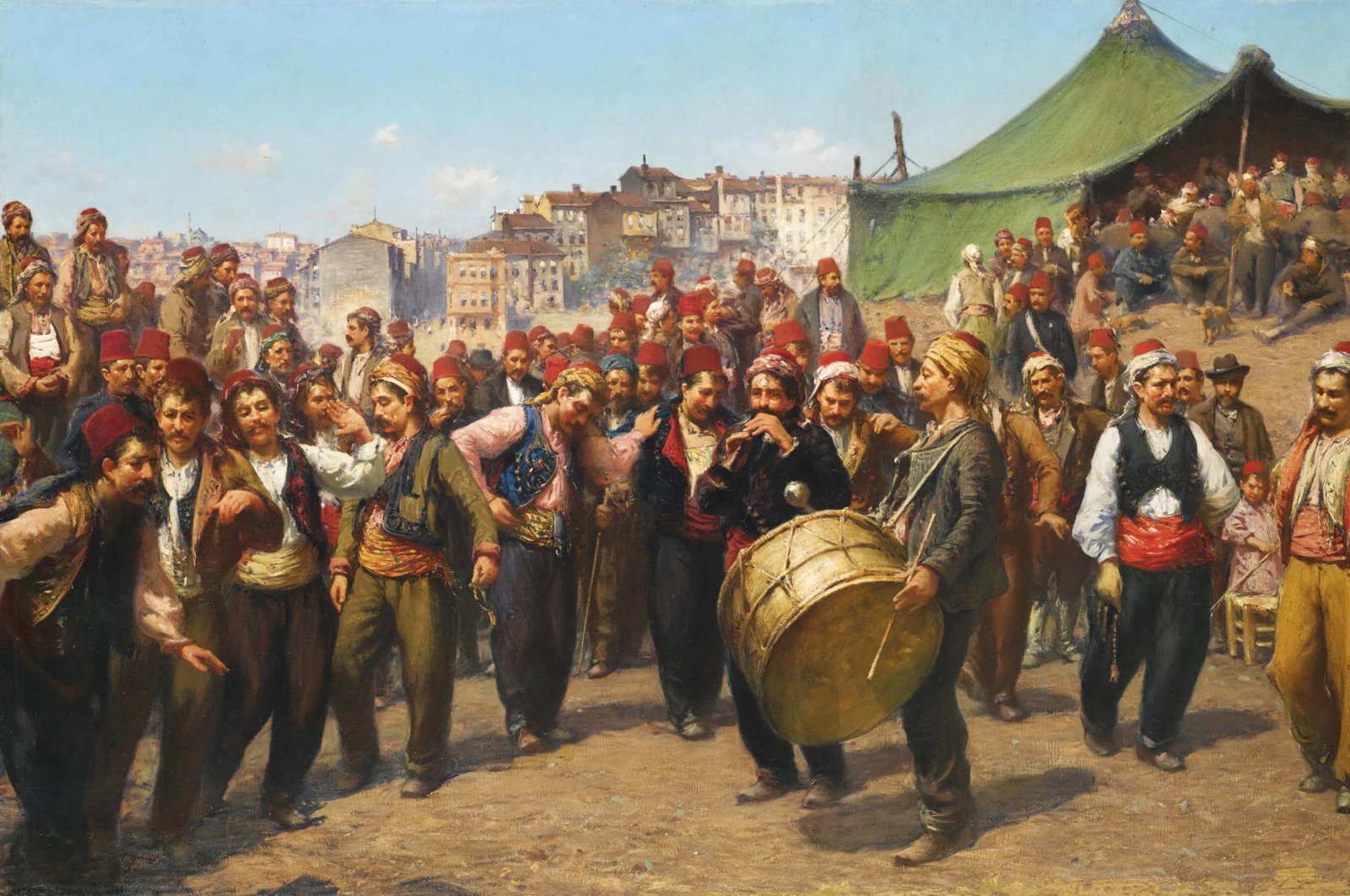 Italian painter Fausto Zonaro's "Bayram" shows the joy the festivities inspire among the people.
by İREM YAŞAR
May 22, 2020 11:51 am

Muslims all over the world are celebrating Eid al-Fitr this week in various ways. Let's explore some of the rituals that take place on these holy days with visual examples from history

Ramadan Bayram, also known as Eid al-Fitr, is one of two of the most feted occasions on the Islamic calendar. While the second occasion, Qurban Bayram, also known as Eid al-Adha, is a festival based around making a sacrifice, Ramadan Bayram marks the end of the holiest month of Ramadan, when Muslims fast and try to refrain from any sinful activity from sunrise to sunset. As Ramadan Bayram cannot begin until a new moon is seen, in line with the tradition, it can be celebrated on slightly different dates according to location. This year, celebrations of the occasion begin May 24.

After a full month of avoiding food and water during daylight hours, for Muslims, Bayram represents a time when they can end their fast and feast happily. The three-day-long festival naturally features several celebration traditions. Among them are waking up early, putting on new clothes and exchanging greetings.

As artwork reflects the sociocultural structure of a people according to their era, what better way to explore these traditions than by taking a look at some Orientalist paintings on the subject. Thanks to these old visual works, we can better understand the meaning of Ramadan and gain imaginative insight into the deeper meaning of the festivities.

How do Muslims celebrate Ramadan Bayram?

Fasting during Ramadan is one of the five pillars (fundamental religious duties) of Islam. This holy month means a time of self-examination and great religious devotion. Toward the end of the month, a holy night called Kadir Gecesi, also known as Laylat al-Qadr or "Night of Power," takes place, which falls in line with the time the first verses of the Quran were revealed to the Prophet Muhammad. It is reported that the prophet said of Laylat al-Qadr that, "Whoever stays up (in prayer and remembrance of Allah) on the Night of Qadr, fully believing (in Allah's promise of reward) and hoping to seek reward, he shall be forgiven for his past sins."

Ramadan Bayram is also a spiritual time of sharing, rejoicing and worshipping. In one of his sketches, Melling Antoine Ignace, one of many Levantine artists to arrive in Istanbul during the 18th century, captured the Fountain of Tophane and its circle. When you look closer to the work, you’ll recognize that a bazaar where vegetables and fruits are sold surrounds the fountain. These types of bazaars are abuzz the day before Bayram, as many generally go shopping to buy food and ingredients to enjoy a large breakfast symbolizing the end of the fast.

Many also invest in a new outfit, know as a “bayramlık,” for the occasion, donning their new attire early on the very first day of the celebration. Maltese painter Amedeo Preziosi depicts two ladies shopping in his painting “Shoppers at Silk Bazaar.” At the time, silk bazaars were the place to buy the fabrics needed to sew dresses. In our current age, however, these markets have long been replaced by dress shops in the modern period.

While Muslims spend the month practicing muqabala (reciting the Quran at mosques), the Salat al-Eid prayer said on the morning of Bayram is just as significant an affair. Pioneering Ottoman artist Osman Hamdi Bey’s “Girl Reciting Quran” painting offers an example of the muqabala as it is practiced. Similarly, Jean Leon Gerome depicts a number of examples of worship in his “Prayer in Cairo” and “Prayer in the Mosque." Although these may not depict Bayram prayers exactly, they certainly serve as models.

Interestingly, in Turkey, Ramadan Bayram is alternatively known as "Şeker Bayramı" – or, “Sugar Feast.” This is due to the fact many families give their guests, especially children, sweets and traditional desserts, such as baklava, over the course of the festival. Italian painter Jean Brindesi depicts a small child and mother in his work "The Itinerant Sweets Seller." The mother is probably standing in front of the booth to get sweets for her infant to enjoy in line with the traditions of the day. The stunning work also shows the Galata Tower in the background and depicts a number of graves in line with another tradition typical of the day, which is to visit the sites of deceased loved ones.

In line with the recommendations of the Prophet Muhammed, adults do all they can for children on Bayram. Historian Ekrem Buğra Ekinci reported in one of his articles that it was on this day that the prophet “caressed the child's head and asked ‘Do you want me to be your father, my daughter Fatma to be your mother and my grandchildren, Hassan and Hussain, to be your siblings?’ He took the child under his wing and dressed and fed him." Neither children nor those in need are forgotten at this time of year. Therefore, Muslims with the means to give are expected to donate zakah, a kind of alms specific to Ramadan, at the end of the month

It is also customary to call on relatives, especially older ones, and – in Turkey – to kiss their hands as a sign of respect. Ramadan in Turkey is also a time when drummers decked in Ottoman-style attire wander the streets to wake up residents for sahur (the meal eaten before dawn during Ramadan). Similarly, on the first day of Bayram, the drumbeats ring out in celebration. The drummers play their instrument while singing poems extolling the holy month both to entertain people and also collect money. The days and nights of this festival are the times when people are rewarded for their good deeds. Italian painter Fausto Zonaro, who is best known for his realist works depicting daily life in the Ottoman Empire, paints this drum scene in his work entitled simply “Bayram.” When you examine the work, you can see what joy the festivities inspire among the people.

At the Imperial Palace, Ramadan Bayram was also an occasion to demonstrate the glory of the state and dynasty. Therefore, Bayram ceremonies were arranged according to Sultan Mehmed II's Code of Laws.

The day before the festival, known as the Day of Arafah, a ceremony used to be held in the Second Courtyard of the palace. On the first day of the Bayram, the palace was decorated with torches, with lanterns hung on all its windows. After the Sultan performed the morning prayer at the Aghas Mosque in Topkapı Palace, he exchanged Bayram greetings with his retinue at the Hırka-i Saadet room, which houses sacred relics belonging to the Prophet Muhammad. Then, in the Arz Odası, which is the official reception place of the sultans, he would wish a happy Bayram to high officials. However, some sources have also referred to the Gate of Felicity, which opens to the Arz Odası, as the place where the sultan met high officials for greeting. Cannons were fired from ships anchored at the entrance of the Bosporus. The sultan then would ride to the mosque on a fancy horse before performing the Bayram prayer. After the prayer, he would then go to the harem to celebrate with family.

French painter Germain Fabius Brest reflected this tradition in his “Bayram Greetings Reception." The work depicts a reception held in front of the Gate of Felicity in the Second Courtyard of the Topkapı Palace during the reign of Sultan Mahmud.