Divan Club, the embodiment of Ottoman admiration in 18th-century London 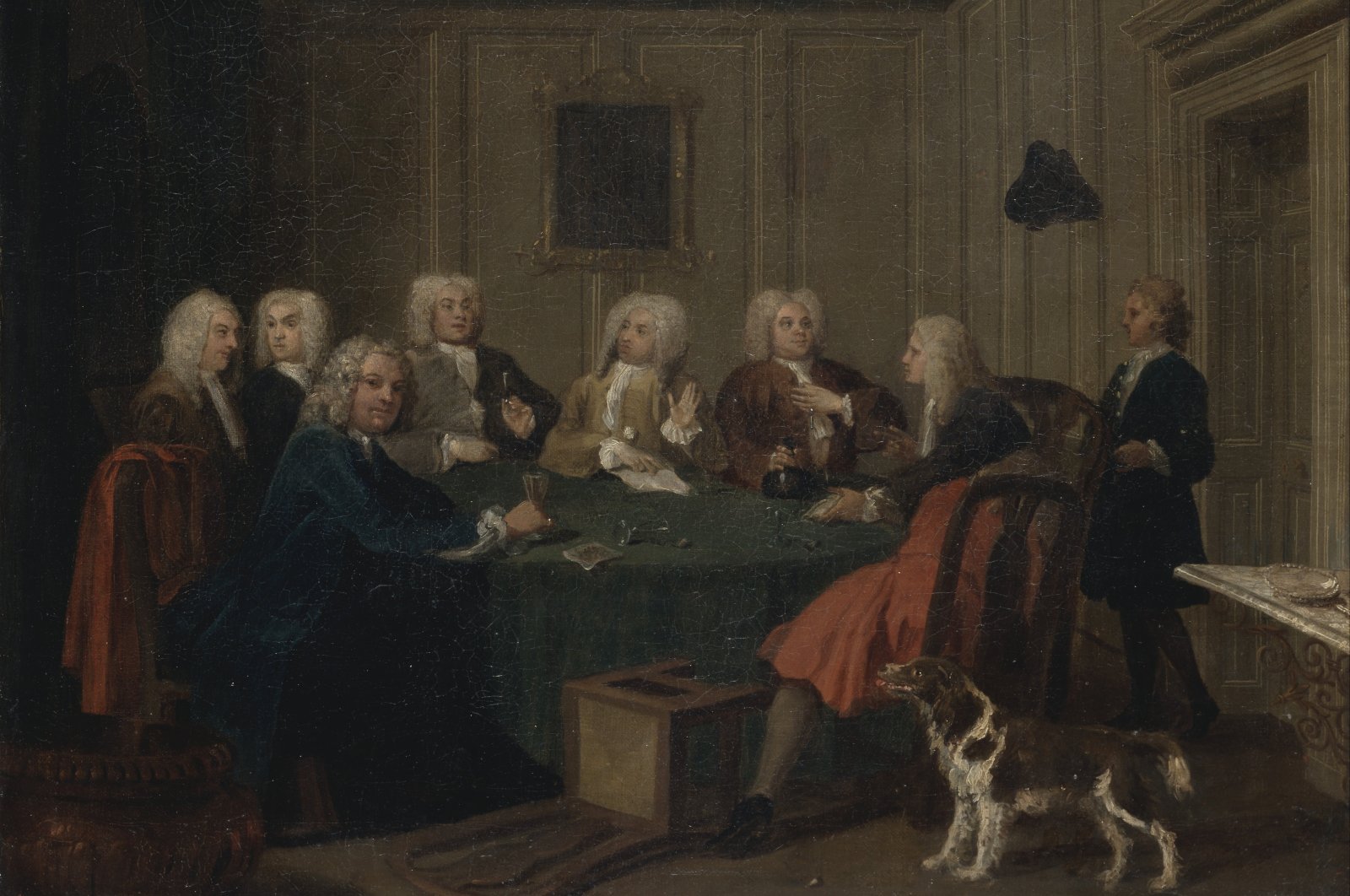 Though it was a short-lived gentleman's gathering in the 18th century, the Divan Club was pioneering nonetheless, collecting men under one roof to discuss all things Ottoman and carry this cultural influence back to English lands

After starting the imperial era with the conquest of Istanbul, Ottomans established an influential presence not only in terms of political superiority but in all branches of culture and arts. Until the 17th century, a kind of fear of Turks prevailed in Europe. However, the withdrawal of the Ottoman armies after the Battle of Vienna was a turning point, and old fears were replaced by curiosity and admiration.

The decrease in wars, the visits of travelers and the increase in embassy relations gave rise to the formation of the Turkish fashion called “Turquerie” in all fields of arts and life, from literature to painting. Starting in Paris, Turquerie began to circulate all over Europe and extended all the way to London.

At the end of the 17th century, the nobility’s curiosity about the Turks reached its highest level. Artworks were shaped according to this trend, as well. Images previously created with fear were replaced by fantasies in a style that could attract the attention of the nobility. Exaggerated and imaginative portrayals of Ottoman palace and state life were particularly popular.

Although painters such as Joseph Parrocel, Henri Fantin-Latour, Charles-Nicolas Cochin, Nicolas Lancret and Charles-Andre van Loo never set foot in Ottoman territory, they painted many paintings about it. However, there were those who came and saw it in person.

The coffee culture also came to Europe as a symbol of Turquerie through Europeans traveling in the East. In a short time, popular coffeehouses began to be founded. The long-established clubs of London that operate today date back to these coffeehouses, which were first established in the 17th century.

Among these social clubs was a short-lived group called the Divan Club. The only condition for joining the club was that all members must have traveled to Ottoman territory or were intending to travel there. Considered to have been the center of gentlemen's clubs in London, the club held its first meeting on Jan. 8, 1744, in St. James's district and remained open for 28 months.

A lady in Ottoman country

The curiosity that spread with Turquerie fashion attracted much British nobility to the Ottoman country. One of those who reinforced this curiosity was Sir Edward Wortley Montagu, who came to Istanbul as an ambassador, and his wife Lady Mary Montagu. In particular, Lady Mary's travel notes and letters which she sent to the U.K. contained extraordinary information about Ottoman life.

Lady Mary observed the Ottoman culture without prejudice. In her letters, she described what she saw in detail. Her trip to the East, which she recalled in fine detail, attracted great attention. After her death, her writings were published under the name "Turkish Embassy Letters."

Lady Mary was one of the figures who broke many prejudices about the Ottomans through her writings. The biggest difference that distinguished her from other writers was the information she conveyed about Ottoman women since she was the first British woman to make such a trip.

Foreign travelers could not enter into a typical Turkish family's life, nor could they know the lives of women. However, Lady Mary was able to meet with Hafize Sultan, the wife of Sultan Mustafa II (1695-1703), and the wives of other state elders. She chatted with them in their houses and observed and portrayed them in person. However, the drawback for Lady Mary was that she could not form such intimate acquaintances with Ottoman men.

Lady Mary noted that Ottoman women did not live the life of captivity as thought by many Europeans but rather were very free. She stated that polygamy was possible in theory but not common in practice. Although there were instances of polygamy in Ottoman lands, even the wealthiest and high-status statesmen had only one wife.

After her son Edward got smallpox, he was vaccinated for the disease in Istanbul. He was the first British citizen to receive a smallpox vaccine. Following this incident, Lady Mary became the one who introduced the vaccine to Europe.

After a one-year stay in Istanbul, Lady Mary returned to London with numerous memories and rich anecdotes. One of the results of this trip was the Divan Club. Lady Mary was in her early 50s when the Divan Club was founded. Like in every gentlemen's club, this club membership was open only to men. Nevertheless, Lady Mary managed to become one of its leading members.

The word “divan” is Persian in origin and has been adopted into Arabic, Turkish and European languages. The first meaning of the word means a large, high assembly. As a matter of fact, the name of the great assembly in which the Ottoman state was ruled was the "Dîvân-ı Hümâyûn," or the Ottoman Imperial Council. The second meaning was the name of the poetry book that Ottoman poets wrote in a unit of measure called “aruz,” in a certain order according to their shapes and the last letter of their rhyme. Therefore, Ottoman poetry is also called “Divan literature.” The third meaning is a kind of sofa with ornate covers, an armrest and pillows on it. Apart from these common meanings, the word has other meanings as well. The Divan Club members were imitating the Dîvân-ı Hümâyûn with the rules they created.

The book in which the club records were kept was named “al-Koran,” inspired by the Quran. In this book, apart from the names of Sir Francis Dashwood and John Montagu, the fourth Earl of Sandwich; the names of eight other founding members were recorded: John William Ponsonby or Lord Duncannon, the fourth Earl of Bessborough; Mr. Edgcumbe; Mr. Fanshawe; Sir Everard Fawkener; Mr. Frolich; John Manners, the marquess of Granby; Mr. McKye and Dr. Richard Pococke.

The member who chaired the meeting was entitled “Vizir” that day, and another member was named “Reis Effendi.” While addressing the "Vizir," the words "El-Faquier" and "Pasha" were added before his name out of respect. The person who was in charge of the accounts of the club was given the title of "Hasnadar" (Haznedar).

The club gathered every two weeks on Friday, with the members wearing Ottoman-style clothing. They used to address each other with Turkish titles that they adapted for each of them. For instance, Sir Francis Dashwood, who was one of the founders, was also called “El-Faquier Dashwood Pasha.” His half-sister Mary Walcot was called “Sultana Walcotonia.”

John Montagu, or Lord Sandwich, (1718-1792) was one of the vizirs who was among the founders of the Divan Club. Because he had no time to sit at the dinner table due to his busy work schedule, he would put a slice of meat between two pieces of bread for a meal. His friends, who saw him eating this at his desk, started making their servants prepare “the one what Sandwich eats” or for short, “that of Sandwich’s.”

When historian Edward Gibbon wrote about this situation in a book, Lord Sandwich's name became associated with this fast and practical food, reaching a global level. Some say Sandwich made these light meals not because he worked, but because he could not get away from the gambling table.

Lord Sandwich, a member of the Montagu family, studied at Eton College and Trinity College of Cambridge University. He stepped into politics as an active member of the House of Lords. He joined the government in 1744 and was appointed to the Navy Command with a civil and political appointment. Although he was suspended from this duty for a while, he returned to the Royal Navy in 1763.

Lord Sandwich supported British explorer Capt. James Cook in his discoveries. As a thank you, the captain named a set of islands that he discovered in the Pacific Ocean – which are today known as Hawaii – the Islands of Sandwich.

Lord Sandwich had a desire to explore the world during the years in which he completed his education. For this purpose, he arrived in Istanbul by ship in July 1738, when he was only 20 years old. He lived in the city for a few months during the reign of Sultan Mahmud I (1730-1754). He wrote a detailed book in which he mainly narrated his observations about Istanbul. This book, called “A Voyage Round the Mediterranean,” was published after his death.

During his stay in Istanbul, he always wandered the streets in Ottoman clothing. He had paintings of himself done in the different caftans he wore. Joseph Highmore’s portrait dating back to 1740 is one of them.

Swiss orientalist and painter Jean-Etienne Liotard was another artist who participated in the eastern journey under the auspices of Lord Sandwich and created portraits of him in Turkish clothing. Liotard also painted the portraits of other members of the club, including Pococke, Lord Duncannon and James Nelthorpe.

The Divan Club was not just a fantasy. When the rules it prepared are examined, as well as the fact that its members were the people in charge of state-related duties, it is seen that they were trying to understand the functioning of the Ottoman administrative mechanism. The members not only traveled to Ottoman territory but also made important publications about the Ottomans, as Lord Sandwich did.

For instance, the book “A Description of the East and Some Other Countries” by Pococke, who was actually a clergyman who studied at Oxford Corpus Christi College, was published in London in 1743. Indeed, these publications are a reflection of the intelligence activities the members of the Divan Club carried out for the U.K.

The last recorded meeting of the Divan Club took place on May 25, 1746. In August that summer, Lord Sandwich was appointed to the Netherlands. Over time, the number of the club's members declined, and the club was disbanded after this last meeting. There were other clubs founded in similar ways. Thus, the Divan Club went down in history as a short-lived club that imitated the Ottoman assembly and held intellectual meetings.

With Turquerie, intellectual assemblies such as the Divan Club were established in the U.K. to understand Ottoman culture, civilization and structure, and this laid the foundation for the formation of Orientalism.