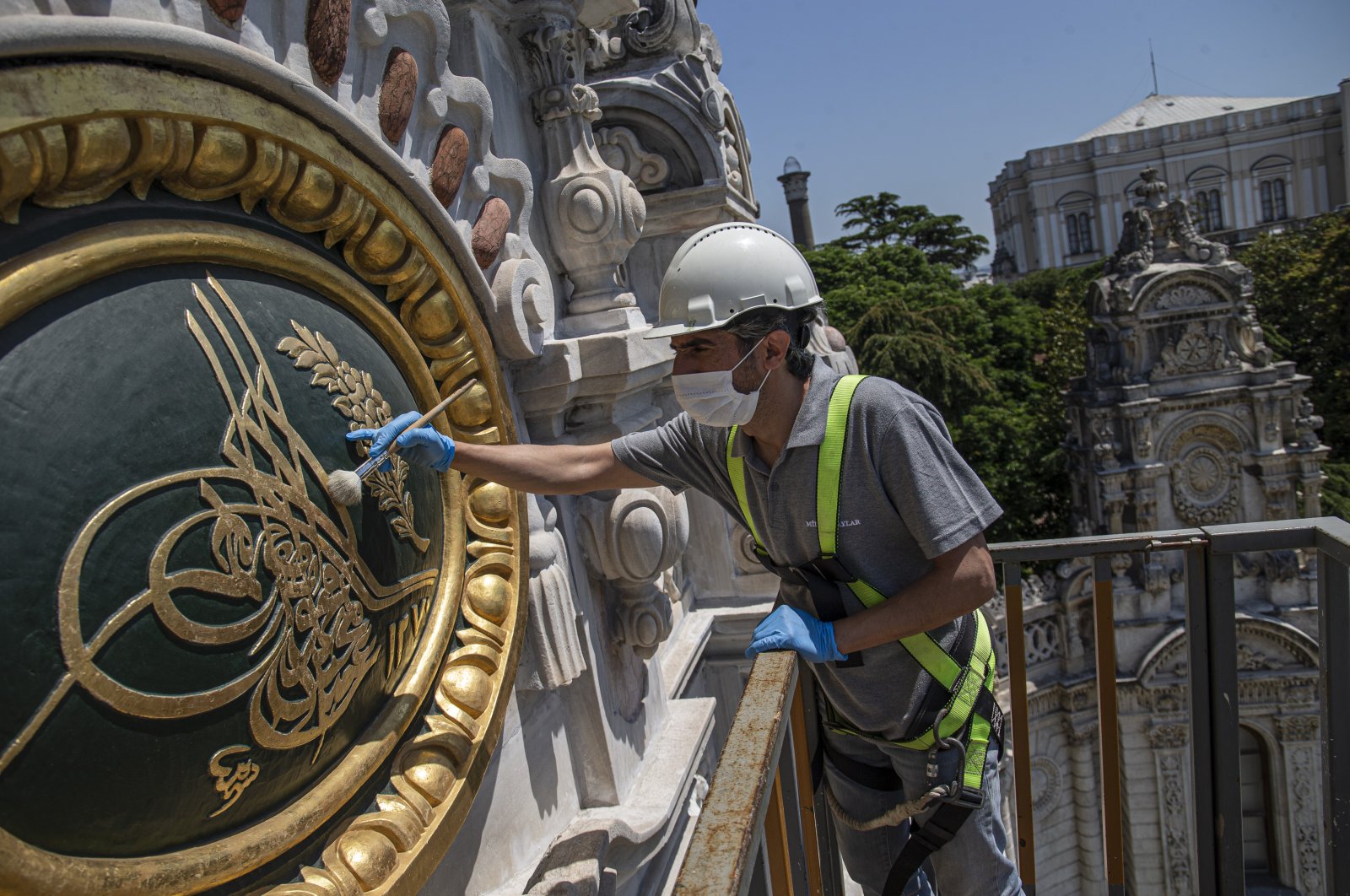 An adorner works on the golden leaf of one of tughras of Sultan Abdülmecid in this undated photo. (DHA PHOTO)
by Demirören News Agency Jun 10, 2020 12:52 pm
Edited By Irem Yaşar
RECOMMENDED

The 164-year-old tughras (seal or signature of a sultan) belonging to Ottoman Sultan Abdülmecid in Dolmabahçe Palace are being restored. The tughras are on the Treasure and Sultanate Gates.

The magnificent gates of Dolmabahçe Palace are of great importance as they are one of the symbols of not only the palace but also of Istanbul. The gates retain their original features despite some 164 years passing. Restoration work has been launched for the tughras on the gates.

The restoration of the Treasury Gate at the entrance of Dolmabahçe Palace and the inscription and tughra on it was completed during the quarantine period when the museum was closed to visitors as part of measures taken against the spread of the coronavirus outbreak. The floor of the tughra belonging to Sultan Abdulmecid and the golden leaf applications were restored. The inscription written by Kazasker Mustafa İzzet Efendi, one of the great calligraphers of the Ottoman Empire, was also maintained. Also, the inscription of the four-verse stanza which was written by the poet Ziver to mark the date of the opening of the palace was renewed in line with its original form. The Treasury Gate welcomes visitors who come to visit the museum during the normalization period, in a restored state.

Dolmabahçe Palace has 10 gates, five of which face land and five of which are on the seafront. The most magnificent of the gates are the Treasury Gate at the entrance to the palace and the Sultanate Gate overlooking Dolmabahçe Street. The tughras on the gates of Dolmabahçe Palace belong to Sultan Abdülmecid, who had the palace built. Tughras are described as the signature of the sultan, intricately and artistically designed. The tughras of Dolmabahçe Palace read “Abdülmecid han bin Mahmud el-muzaffer daima" (Sultan Abdulmecid, the son of Mahmud, ever victorious) with reference to Sultan Abdülmecid and his father Sultan Mahmud II.