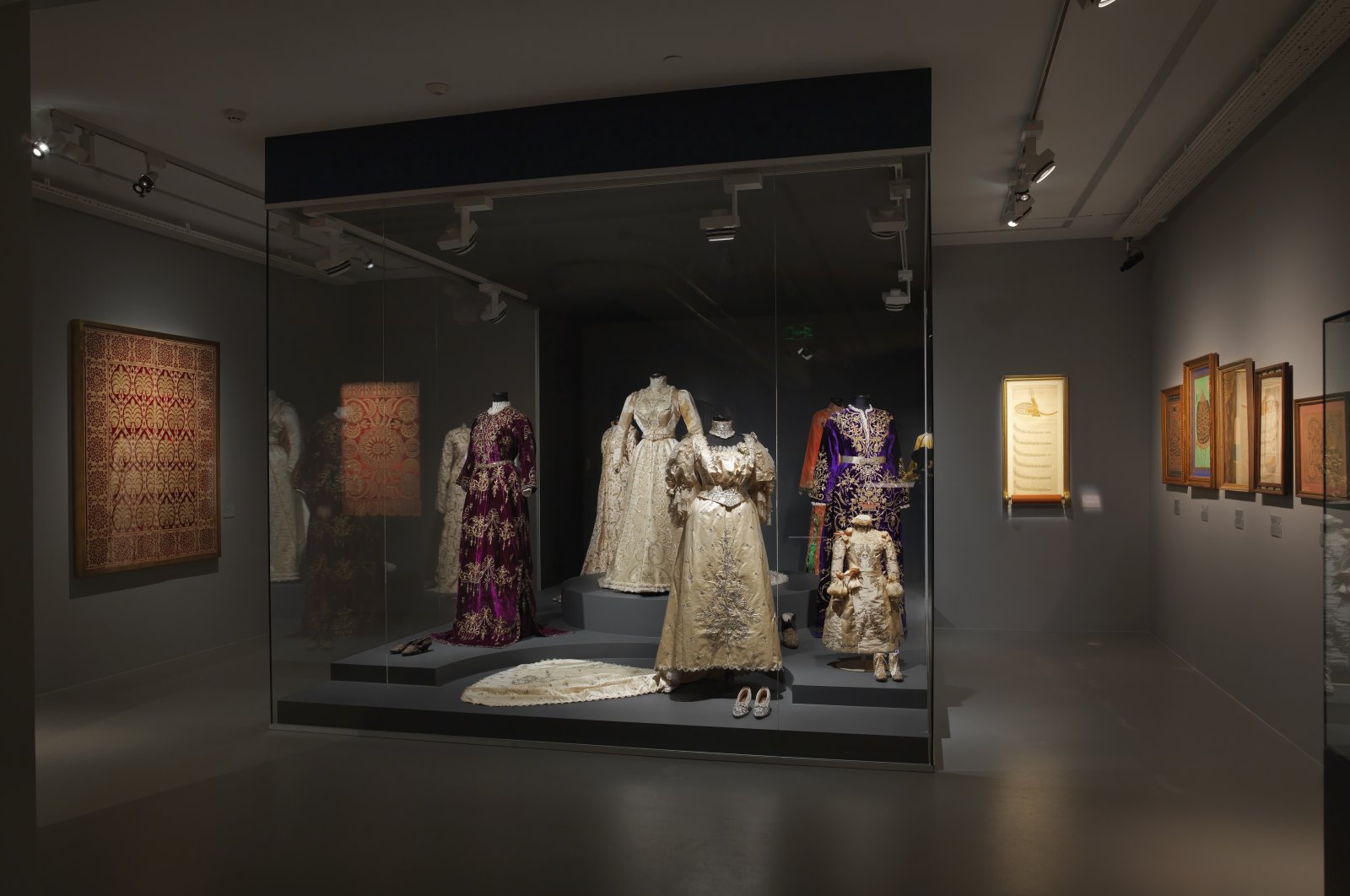 Ottoman-period attire is seen at the “Preserving the Past: A Selection from the Sadberk Hanım Museum” at Meşher, Istanbul.
by DAILY SABAH Jan 07, 2021 12:46 pm

On the occasion of the 40th anniversary of its founding, Sadberk Hanım Museum presents a selection from its collection at Meşher, an art space at the former Arter location on Istiklal Street

As part of Meşher’s third exhibition, an exclusive selection of rare artifacts from Sadberk Hanım Museum, Turkey’s first private museum, met art enthusiasts on Dec. 16, 2020. Taking visitors on a journey through the history of civilizations of Anatolia, “Preserving the Past: A Selection from the Sadberk Hanım Museum” will be on display until Aug. 1, 2021.

The latest Meşher exhibition offers 210 artifacts selected from the Sadberk Hanım Museum’s Archaeological and Turkish-Islamic Art collections, which contain more than 19,000 pieces of works. The works have been carefully chosen to present the cultural accumulation of the Sadberk Hanım Museum, which covers a period of almost half a century, to a wider audience. Each work sheds light on the period to which it belongs and brings to the future the story of a long period of time from 6,000 B.C. to the 20th century.

Hülya Bilgi, director of the Sadberk Hanım Museum and the curator of the exhibition, said the Sadberk Hanım Museum is a pioneer of private museology in Turkey. She underlined that the museum has been striving to consciously enrich its collection within a certain discipline, exhibit it, promote it with scientific publications and transfer the works to future generations by preserving them in good conditions since its opening in 1980. “The newest exhibition held at Meşher, which can be considered the heart of Istanbul in terms of its location, takes visitors on a time journey through thousands of years, shows the diversity and richness of the museum collection by displaying both the Anatolian civilizations with striking examples and the Ottoman art with the most outstanding examples,” she added.

During the exhibition, Meşher and Sadberk Hanım Museum also offer a joint online events program. In accordance with the measures taken due to the pandemic, seminars, workshops and children's events will be held on Meşher’s digital platforms. The scheduled events can be followed through Meşher’s social media accounts.

Moreover, an exhibition book was prepared by director, curator Bilgi and archaeologist Senem Özden Gerçeker. The book, published with the same title of the exhibit in both Turkish and English, gives a brief history of ancient Anatolian civilizations after an introduction. Then, it tells a history of Turkish-Islamic arts with the text titled “Traces of Islamic Arts in Anatolia” penned by Bilgi. Its “Catalog” section, which presents high-quality images of the exhibited works, offers the chronological order and explanatory texts about the pieces.

Sadberk Koç wanted her collection, which she had combined with her passion for handicrafts, to be exhibited at a museum that would be named after herself. Following her death, her husband Vehbi Koç, the founder of Turkey's largest conglomerate Koç Holding, and her children made intensive efforts to fulfill her desire to establish a museum. Sevgi Gönül, in particular, took on the task of fulfilling her mother's dream on behalf of the Koç family. The Koç family decided to convert the Azaryan Mansion in the Büyükdere neighborhood of Sarıyer district, which they had bought as a summer residence in 1950, into a museum in memory of Sadberk Koç as part of the restoration project implemented by leading Turkish architect Sedat Hakkı Eldem between 1978 and 1980 and to exhibit Sadberk Hanım’s personal collection there.

The handicraft works that Sadberk Hanım had collected and stored with great dedication formed the core of the museum. Her interest in ancient works of art eventually grew into a collector's rigor and selectivity, which she later passed on to her family.

Particularly due to its Iznik tiles and ceramics, Ottoman period women’s clothing and embroidery collection, the Sadberk Hanım Museum has a significant place among world collections. The museum collects the most outstanding examples of Ottoman arts, from calligraphy to silk weaving, as well as archeological and early Islamic works, and passes down this cultural heritage on to future generations.

Meşher, an affiliate of the Vehbi Koç Foundation (VKV), organizes extensive exhibitions ranging from historical research to contemporary art, as well as series of events such as workshops and conferences. Meşher, which means “exhibition area” in Ottoman Turkish, has been serving since September 2019 in order to provide an inspiring ground for dialogue between periods and cultures. Through exhibitions, Meşher continues to contribute to culture and arts with its program covering a wide range of topics over a long period of time from the Medieval Ages to the present day, its research-based academic aspect and rich publications.

Information about health measures taken at Meşher and updated visiting hours is available at the website of the gallery.