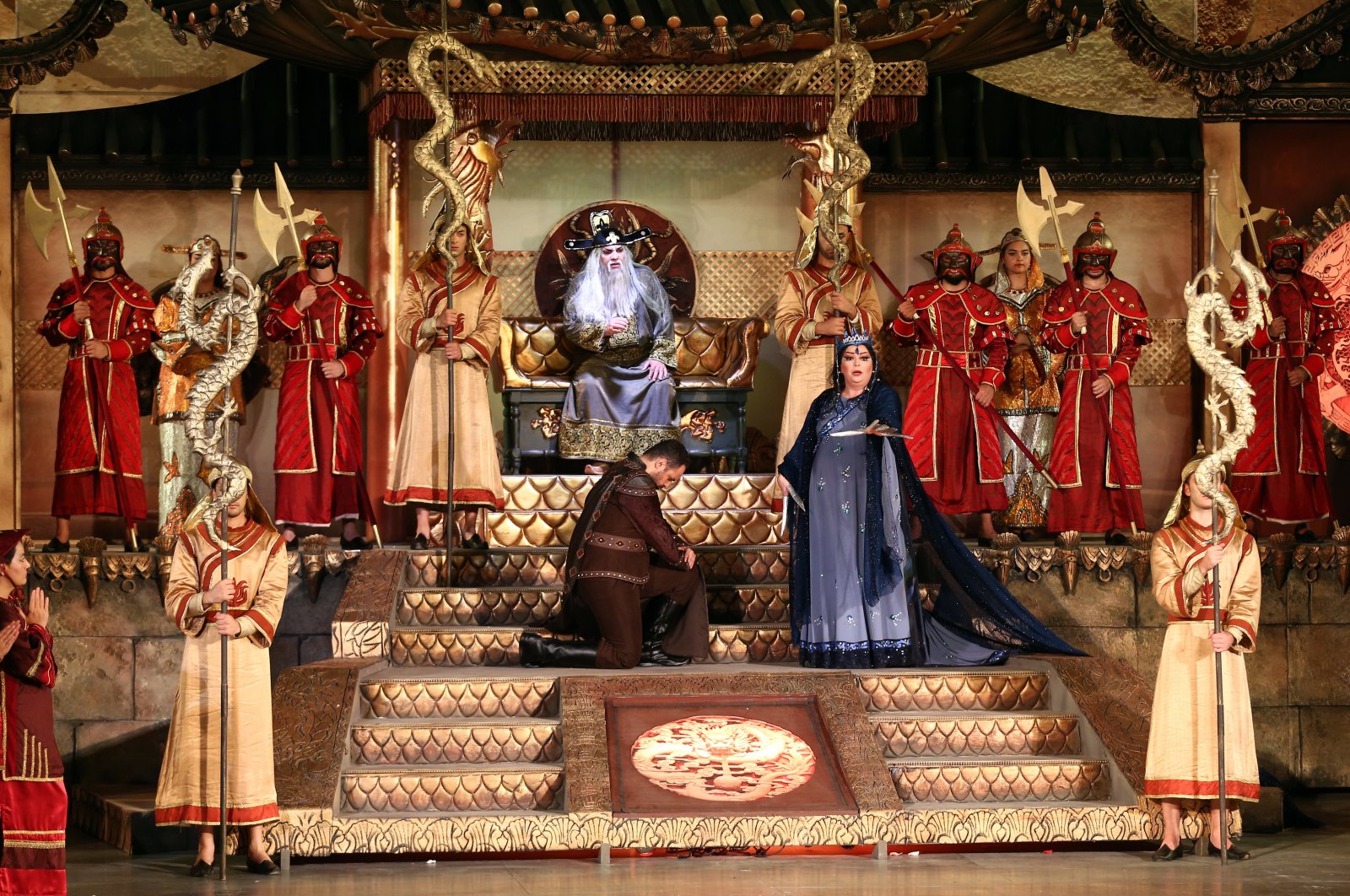 A photo from the "Aida" opera performance at the 25th International Aspendos Opera and Ballet Festival provided on May 5, 2019. (THA Photo)
by Anadolu Agency Jul 15, 2020 1:15 pm
Edited By Irem Yaşar
RECOMMENDED

State Opera and Ballet (DOB) general manager, tenor Murat Karahan, said that the coronavirus pandemic that has swept the world has affected art institutions as well, modifying the types of performances that will be offered this season.

Speaking at a news conference on international festivals in the foyer of the opera house in the capital Ankara, Karahan said that the DOB held 404 performances in the 2017-2018 art season and 373 in the 2018-2019 season as the Ankara DOB started the season late. According to the tenor, 434 performances were held in the October-February period of the 2019-2020 season.

The DOB attracted 46,185 viewers during 34 performances in festivals in 2018, grossing TL 1,459,597, and 63,520 viewers in 59 performances in festivals in 2019, grossing TL 2,457,068. “We had set our target high for festivals this year and were planning to double our figures. At this point, art events have come to a standstill. We have resumed our events slowly in the process of normalization,” Karahan added.

He said that ballet troupes in countries such as the U.S., Spain, Russia, Italy and the Netherlands canceled all their performances until January 2021, adding that several opera houses in Europe would perform twice a month with one or two-person choreographies. Pointing out that the situation is no different in opera and famous Italian La Scala Opera is resuming concerts gradually, Karahan noted: “Returning to art in the world is somewhat symbolic and mainly focuses on concerts. Some 200-300 people come together at operas and ballets. People work at close distances including hairdressing and make-up processes. We have followed the world (developments) closely. The world is avoiding large opera representations. As the State Opera and Ballet, we have started concerts. We based the seating arrangement in concerts on a study carried out by the leading symphony and philharmonic orchestras of Germany and scientists from Berlin University under the pandemic conditions.”

Karahan stated that they started the Bodrum Kaleiçi events that they have jointly held with the General Directorate of Fine Arts and State Theatres with "The Fun Time of the Opera," which was enjoyed by the audience. He further noted that they will perform the musical “Hisseli Harikalar Kumpanyası” ("Shared Wonders Company"), which they have minimalized, eliminating the orchestra, as well as the “Akdeniz Esintileri” ("Mediterranean Breezes") concert and “Three Tenors Concert.”

“We consulted with chief ballet choreographers from six cities. In line with their suggestions, we decided not to hold the Bodrum Ballet Festival and we regrettably canceled it. There is no country in the world that has a ballet festival. Ballet art has ceased in the world. We canceled the ballet and the opera in our festivals called 'opera and ballet festivals.' We also canceled our large-scale operas. We had planned highly qualified and enjoyable special concerts,” Karahan said.

He said they will hold the “European and Ottoman Palace Music Concert” on July 21, "The Fun Time of The Opera" at the Izmir Open-Air Theatre on July 26 and “Seven Tenors Concerts” on July 28 as part of the Ephesus Opera and Ballet Festival scheduled for July 21-28.

According to Karahan, all of the concerts will be held outdoors and viewers up to 50% of the capacity will be accepted. One seat will be left empty in front of and behind each chair. “The viewers are required to wear masks before entering. Despite all the precautions, everyone needs to do their own checks,” Karahan underlined, saying that it is crucial to pay attention to hygiene. “We want to keep the light of art shining. Maybe we have continued on the symbolic level, but we prefer to follow examples around the world as a basis."

"There will not be many tours either. We will also reduce our number of orchestral artists at points where the stage is not large enough. We have taken the highest precautions for our artists and for our audiences. We do not want to leave our audience without art and without music,” Karahan said.